Abstract: Quantitative easing came as expected and has turned the euro around. Can U.S. stocks keep rising as the stimulus package is long overdue? The pound has been on a rollercoaster ride amid the turmoil surrounding the Brexit deal. The COVID-19 pandemic continues to worsen, leading to a short-term rebound in gold. COVID-19 vaccine approval and vaccination accelerated, spurring oil prices the highest level since March. 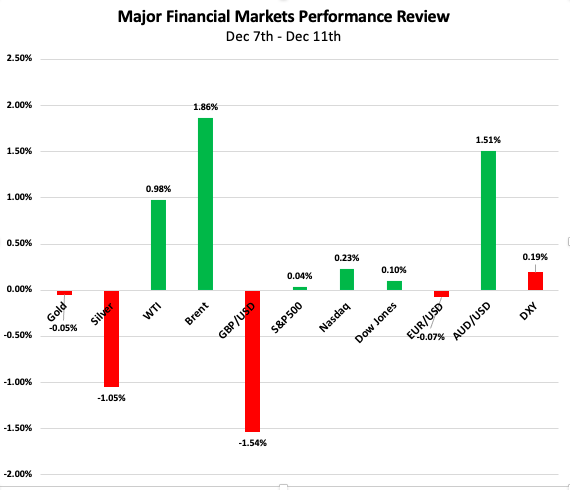 Post Contents [hide]
After ECB expanded a stimulus package, will Euro poise to break above 1.22?

The much-watched interest rates decision was announced by the European Central Bank (ECB) last week and, as expected, the ECB embarked on further quantitative easing. Although it did not move interest rates this time, it increased its bond-buying program by €500 billion ($605 billion), while extending it to at least the end of March 2022 for now. The ECB also extended targeted longer-term refinancing operations (TLTROs) by 12 months and loosened lending standards. Meanwhile, pandemic emergency longer-term refinancing operations (PELTROs) will continue through to 2021, with 4 additional operations. European Union leaders agreed on a long-term budget for the bloc, approving a $2.2 trillion budget and stimulus package. As a result, the euro's decline against the dollar was reversed early last week by these aggressive support measures for economic recovery, and it bounced back sharply on Thursday, breaking 1.21 at one point. At the close of last week, the euro was trading at $1.2111, down a small 0.07% on the week.

Last week's Eurozone GDP figures confirmed the need for the ECB to further quantitative easing. Eurozone GDP fell by 4.3% in the third quarter from a year earlier, the data showed, only slightly better than the previous estimate. It should be noted that the ECB cut its forecast for 2021 GDP growth to 3.9%, down from its previous forecast of 5%. ECB chief Christine Lagarde said the second COVID-19 wave would lead to a sharp contraction in the economy of the fourth quarter, and predicted that it would drag down the growth in the first quarter of next year, with inflation remaining disappointedly low. Eurozone PMI and CPI data will be released this week, but inflation in the region, which has been below zero, leaves markets with gloomy forecasts for the data. If so, the euro may suffer.

The last week has been tumultuous for U.S. stocks. Optimism about a $908 billion stimulus deal and good news about vaccine development helped stocks start the week strong. However, the twists and turns of the bipartisan talks and the continuing deterioration of the pandemic in the United States have hindered the advance of the stock, and the three major indexes fell sharply on Wednesday. On top of that, initial jobless claims last week rose to 853,000 after Thanksgiving, sharply higher than expected. As a result, the market has had to confront the underlying issue that U.S. economic recovery is slowing. For now, however, investors remain bullish, mainly because of hopes for an accelerated rollout of the COVID-19 vaccine. The Food and Drug Administration (FDA) panel voted 17-4 with one abstention last week that the benefits of vaccines from BioNTech and Pfizer outweighed their risks, helping to stem the downward slide in U.S. stocks caused by poor jobs data. At last week's close, the S&P 500, Nasdaq and Dow rose by 0.04%, 0.23% and 0.1%, respectively, to 3668.1, 12405.81 and 29999.26. See Nasdaq100 live chart below:

The bipartisan negotiations over a stimulus package will continue to dominate the markets' attention this week. The monthly rate of retail sales, known as the "devil's data", will be released, and it is eye-catching to see whether the data can be significantly improved as the holiday season gets under way.

The dollar rebounded modestly, while gold was up and down

Gold surged above $1,875 an ounce at the start of last week, its highest level in nearly two weeks, as the COVID-19 worsened and Brexit negotiations hung in doubt. But it didn't last long, as the bipartisan talks on the stimulus package that should have made new progress Wednesday were once again drawn into a seesaw over differences, sending gold into another selloff. As a result, the metal gave up previous gains and fell as low as $1,825 an ounce. At the close of last week, it ended at 1837.5, down 0.05%. In the dollar, selling in short position appeared to be over, with the greenback bouncing back from oversold territory last week. But it is worth noting that the bearish voices on the dollar are growing. The dollar's rally may be short-lived, as the Fed's interest rates were unlikely to rise any time soon, the stimulus package was looming, and the fiscal deficit might keep rising. At the close of last week, the dollar was at 90.98, up 0.19% on the week. See gold price live chart below:

In addition, more and more people are comparing gold with Bitcoin after the price of Bitcoin has skyrocketed. The Grayscale Bitcoin Trust, a listed security popular with institutions, has seen inflows of almost $2 billion since October, compared with outflows of $7 billion for ETFs backed by gold, according to JP Morgan. This could be an indirect indication that some gold investors are turning to the cryptocurrency market. Still, with initial jobless claims in the United States increased sharply, the pressure of launching a stimulus package and extreme quantitative easing by central banks around the world could give gold some support.

Oil inventories surged, but demand was under threat

Crude oil got off to a bad start last week with a new economic blockade due to the worsening of the pandemic. Home quarantine and curfews were reinstated in some U.S. states, further weakening demand for oil. This was fully confirmed by API and EIA crude inventory data released last week. The API and EIA reported crude inventories rose 1.141 million barrels and 15.189 million barrels, respectively, sharply higher than expected. The EIA's surge not only broke the previous two-week decline, but also marked the largest weekly increase since April. But U.S. crude and Brent crude fell only briefly after the data, and then rose on the back of an unexpected two bombs that sparked fire at the Khabbaz oil field in Iraq, OPEC's second largest oil producer, and of optimism about the COVID-19 vaccine, by more than 3% on Thursday. And Brent crude managed to break the $50-per-barrel mark. At the close of last week, U.S. crude traded at 46.56 and Brent at 49.95, up 0.98% and 1.86% for the week.

Despite the stellar rally, the oil market still faces risks:

1. The bullish momentum for crude oil weakened as the news that OPEC+ will slightly increase crude oil production was gradually priced in.

2. Although the efficacy of the vaccine has been approved, its transportation and production remain thorny.

3. The threat to the oil market posed by limited economic activity became apparent. Therefore, in the short term, investors should be alert to the downside risks from the COVID-19.

Uncertainty of Brexit has left the pound deep in volatility

GBP has been bouncing up and down over the past week, and the underlying cause is the volatility of the Brexit negotiations. Early last week, the pound plunged 200 points to 1.3224 against the dollar, its lowest level in nearly two weeks, after British Prime Minister Boris Johnson threatened to "walk away from the talks within hours". The pound continued its downward trend, due to the negative reaction to the outcome of the Brexit negotiations as key talking points - fisheries, the conditions supposed to ensure fair competition between companies on both sides, and “governance”, which is to say the management of possible future disagreements - remain to be agreed on. It then rose to 1.347 against the dollar after Britain agreed to withdraw controversial clauses in the UK Internal Market Bill. But the British and European sides were not pushed by such move in the subsequent negotiation, and the Brexit deadlock continued. The pound weakened again as a result. At the close of last Friday, GBP/USD was at 1.323, down 1.54% for the week. Failure to reach an agreement after nine months of negotiations would deal a major blow to the British economy and disrupt supply chains for British and EU companies, according to Bloomberg. Moreover, as the UK has imposed trade tariffs and quotas on its biggest and closest business partner, consumers will be hit by the extra costs they will have to accept. There is little doubt that GBP will be more volatile this week.