Abstract: The dollar retreats after a rally, while gold hovers around 1800. Strong earnings numbers push U.S. stocks higher. The battle of long and short heats up, adding to oil market volatility. The Australian dollar falls sharply after the recovery hits a snags. ECB vows a ‘persistently accommodative’ stance in new guidance and the euro was back in turmoil. 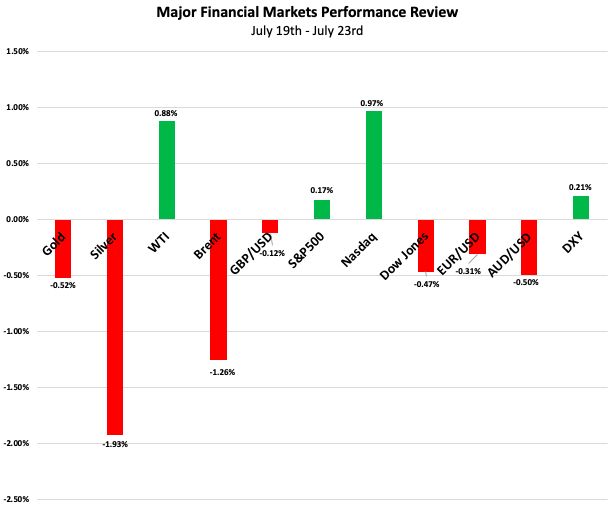 Post Contents [hide]
The dollar moved above 93, while gold fell

Gold fell last week, ending a four-week winning streak. While the resurgence of the virus fueled risk aversion, the strong uptick in the U.S. dollar reduced the appeal of gold as an alternative asset, causing the metal to lose the 1,800 mark. At the close of last week, gold traded at $1,1801.3 an ounce, down 0.52% for the week. Gold's inability to rebound, even in the face of rising risk aversion, appeared to reflect weak speculative flows, increasing the likelihood of a further correction. However, central banks would put their taper plans on hold due to the virus, which could be a positive factor for the gold market.

On the dollar front, the yield on the 10-year Treasury note fell below 1.2% whereas the dollar rose strongly and briefly rose above 93, its highest level in more than three months, driven by risk aversion and expectations that the U.S. economic recovery may falter. Later, the dollar weakened as a poor bond auction and a resurgence in risk appetite led to a rebound in Treasury yields. The U.S. Dollar Index ended the week at 92.906, up 0.21%. Going forward, the dollar is likely to remain underpinned by risk aversion, but the Fed's continuation of quantitative easing due to the new wave of COVID-19 is a potential headwind to the dollar's upside.

The week began with a decline in the U.S. stock market. While investors had expected strong Q2 earnings numbers to propel the market to new highs, a surprise rise in the volatility index (VIX) sent stocks into turmoil. But more than 85% of companies in the S&P 500 have beaten analysts' estimates, according to Bloomberg. As a result, the stock market rout, on a backdrop of strong corporate earnings, continued government stimulus and ultra-loose monetary policy, created a bottom-hunting opportunity for traders, contributing to the stock market's biggest rally since March. At the end of last week, the S&P 500 and NASDAQ rose by 0.17% and 0.97% to 4,367.48 and 14,684.6, respectively, whilst the Dow was 34,823.35, down 0.47%. See S&P500 chart below:

On the economic front, U.S. housing starts rose more than expected in June, suggesting home construction was stabilizing despite supply chain bottlenecks and labor shortages. However, the number of Americans filing new claims for jobless benefits unexpectedly rose to 419,000 from 368,000, much higher than expected, underscoring the uncertainty surrounding the recovery in the U.S. industrial market. This week, the Fed rate decision and monetary statement will be released. By then, investors will focus on how the Fed will weigh the impact of the worsening Delta variant against a sustained rise in inflation. In addition, second-quarter earnings of apple (AAPL), Microsoft (MSFT), Google (GOOGL), Facebook (FB), Amazon (AMZN) and Boeing (BA) will also be due this week, so investors should position ahead of time to leverage market volatility.

Crude oil prices plunged at the start of last week. U.S. crude and Brent crude slipped to $65.11 per barrel and $67.46 per barrel, respectively, the lowest levels since the end of May, as the OPEC+ deal to increase production and the worsening Delta variant triggered global risk aversion. Then, U.S. crude and Brent crude rebounded strongly, recouping some of their losses due to the eased market anxieties and regained momentum among global risk assets. Nonetheless, crude prices were slightly lower after API and EIA oil inventories data showed unexpected increases of 806,000 barrels and 2.108,000 barrels. Finally, U.S. crude went up by 0.88% to $72.06 per barrel at the close of the week whereas Brent crude ended the week at $72.06 per barrel, down 1.26%. Separately, the worsening Delta variant could lead to more restriction measures, slowing economic recovery and oil demand. In the face of such an uncertain demand outlook, the increase in oil supply could further dampen bullish sentiment on oil prices, leading to greater volatility in the market ahead.

Last week, RBA minutes showed that officials remained committed to maintaining highly accommodative monetary conditions, the economy was moving from recovery to expansion, and the labor market was recovering faster than expected. Still, the spread of the Delta variant in parts of Australia could prevent the RBA from going ahead with the planned tapering of its weekly bond purchases from A $5 billion to a $4 billion, sending the Australian dollar back into turmoil. On top of that, retail sales fell 1.8% in June from the previous month, the biggest drop this year, as business restrictions hit consumer demand. The disappointing economic data also cast a shadow over Australia's growth in the third quarter. AUD/USD fell after the data was released and closed the week at 0.7364, down 0.5%. This week, Australia's CPI for the second quarter will be released, after rising 0.6% in the first quarter, well below expectations of 0.9%. Therefore, investors should watch to see if inflation improves with a strong economy recovery in the second quarter.

Last week, the ECB announced its interest rate decision and monetary policy. The central bank said it would not raise borrowing costs until inflation reached its 2% target, suggesting it was raising inflation with a persistently accommodative monetary policy. As the dovish comments linked inflation to interest rates more closely and were seen as a commitment to looser monetary policy in the longer term, EUR/USD retreated after breaking 1.18 in the short term. At the close of last week, the euro was at $1.1768, down 0.31% on the week. At the same meeting, the ECB also highlighted the potential threat to the Eurozone's recovery from the Delta variant. Also, a drop from -3.3 to -4.4 in the consumer confidence index suggested that consumers in the Eurozone were becoming slightly more cautious as a result of the virus. This week, Eurozone CPI will be released, after inflation came at 1.9% in June, down from a two-year high of 2% previously. Eurozone GDP data will also be due this week. And investors should watch whether it will show improvement after the comments by ECB President Christine Lagarde that the European economy would return to pre-pandemic levels by the first quarter of 2022, as market confidence was further boosted by the support from the central bank's fiscal and monetary policies.

Last One With recent unfavorable news,is gold and silver deep in trouble?
Next One U.S. Stocks Climb to New Highs as Fed Continues to Sound Dovish
Latest Release
Popular Reading