COVID-19 crisis escalated into another storm in the oil market

Abstract: Economic blockade and increasing production have brought new challenges to crude oil prices. A stimulus package was one step away after being negotiated for months of wrangling, but it was vetoed by Donald Trump. Could the pound move up smoothly after Britain and the European Union have struck a free-trade agreement? Risk appetites temporarily returned, and gold briefly broke 1900. Is the Australian dollar still bullish amid Australia - China relations in the spotlight? 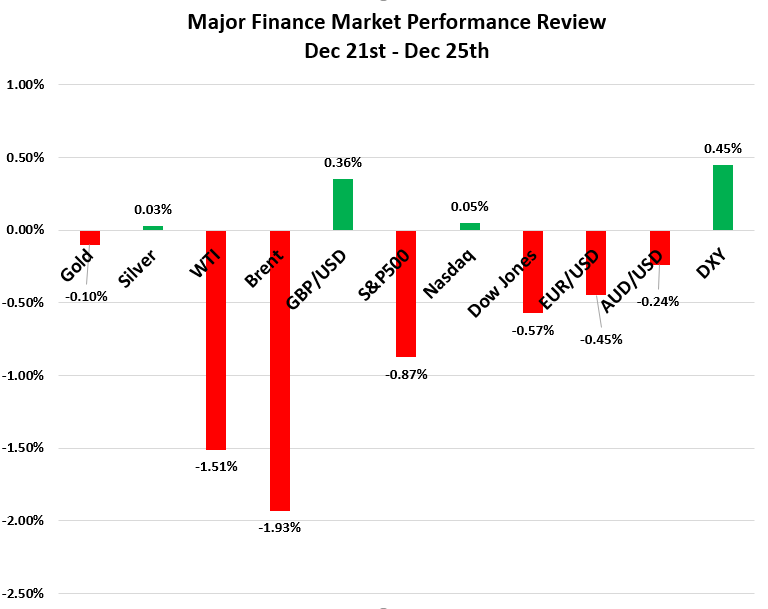 1. The discovery of a more infectious mutated virus in the UK has led to stricter travel restrictions in parts of the world.

2. A drop in crude purchases by Asian refiners has also contributed to the recent reversal.

Then Oil prices swung from negative to positive last week, when the EIA released crude inventories data showing a 562,000 barrel decline in the week ended Dec. 18. By last week's close, U.S. crude and Brent crude were trading at $48.29 and $51.29 a barrel, down 1.51 percent and 1.93 percent for the week. See WTI oil price Live Chart below:

Going forward, the recovery of crude oil prices will not be smooth. Oil demand is likely to remain weak in the coming months as governments in most parts of the world keep their economic blockade in place to avoid crowds during the Christmas and New Year holidays. Although vaccination has begun, its challenges continue to weigh on short-term oil prices. There are many cases of allergy caused by vaccination, and the mutation of the virus increases the infectivity, which may lead to a rapid increase in the number of short-term hospitalization, and meanwhile force major countries to implement a larger blockade. On top of that, Russia said last week it would support OPEC+ to increase oil production by 500,000 b/d from February, 2021, which could prompt further oversupply and volatility in the oil market.

Can GBP move up smoothly after Brexit deal?

The pandemic in the UK and the Brexit negotiations were important factors that dominated the pound's move last week. Sterling suffered a sell-off at the start of last week, with GBP/USD falling as low as $1.3188. The main reasons are as follows:

1. The market panic about the mutation of the virus.

2. The imposition of the highest level of economic blockade by the British government, which further aggravated the British economy.

3. The rebound in the dollar.

In addition, the U.K. reported 39,237 new cases of the coronavirus since the pandemic began last Wednesday, the highest level on record, according to the UK government. Despite the continuing deterioration of the virus in the UK, the pound went from negative to positive even before the Brexit deal was struck, briefly topping 1.36 on optimism about the outcome of the Brexit negotiations. However, sterling's response to the Brexit vote has not been as strong as markets had expected. By the end of last week, GBP/USD was at 1.3563, up 0.36 percent on the week. On top of that, last week's UK GDP data, which showed a record 16.0 percent growth in the third quarter, higher than the previous estimate of 15.5 percent, appeared to suggest that the UK was recovering from the coronavirus crisis more quickly than previously thought.

Going forward, although the Brexit negotiations have finally reached a final agreement, the agreement has yet to be voted on by the British House of Commons this week. As the weak fundamentals of the UK economy and the UK's strict economic blockade will also weigh on sterling, the downside risks to sterling could intensify if the UK's economic recovery is too slow and pushes the Bank of England to introduce long-discussed negative interest rates.

Last week, despite continued enthusiasm for a new congressional stimulus package and the start of shipping of Moderna vaccines, it wasn't enough to reverse the market's poor start to the day due to concerns about a highly contagious mutated virus in the UK. The House and Senate then voted to pass a much-coveted $900 billion stimulus bill and a $1.4 trillion stopgap spending bill, but President Donald Trump slammed the bill as a "disgrace" and refused to sign it, demanding an increase in the government's direct $600 bailout to $2,000. But the demand was rejected by some Republicans, so the new stimulus bill stalled. Last week, the S&P 500 fell for almost three days in a row, partly as investors took profits after a year of strong gains and remained cautious as the year drew to a close. At last week's close, the S&P 500 was down 0.87% and the Dow 0.57% at 3690.01 and 30129.83, respectively. The Nasdaq was up 0.05% for the week at 12,771.11. See S&P500 live chart below:

Separately, U.S. initial jobless claims last week came in at 803,000, better than market expectations of 888,000, while core durable goods and personal income both fell short of expectations in November. It also reflects the U.S. economy's anxiety over the pending aid package. The stimulus package remains the focus of the markets this week. Meanwhile, the House of Representatives is likely to pass another stopgap measure to avoid a government shutdown. If both the stimulus package and the stopgap measure fail to pass, much of the U.S. government sectors will be shut down for lack of money, and U.S. stock market could be rattled.

The rebound in the dollar ended, while gold recovered from the downtrend.

The gold market was volatile early last week. Gold breached $1,900 an ounce last Monday, returning to levels last seen before positive news about the effectiveness of the vaccine in early November, as negative news about the virus mutation and increasing infectivity dampened risk appetite. It then fell to a resistance level near $1,855 an ounce as the dollar rebounded strongly. However, the new stimulus package agreed by the U.S. Congress capped the dollar's gains, thus halting gold's slide. By last week’s close, gold was trading at $1,878.97 an ounce, down 0.1% for the week. The U.S. Dollar Index (DXY) moved in the opposite direction to gold, breaking 91 on risk aversion but losing momentum as the stimulus package passed. By last week's close, DXY was at 90.329, up 0.45% for the week.

Going forward, downside risks to the DXY remain significant. Despite the tortuous negotiations, a stimulus package is likely to be pushed through because of the weak recovery. Biden said he would approve a larger economic bailout when he takes office, so the recent pullback in the dollar is hard to reverse its long-term decline. And gold is likely to remain range-bound in the short term. In the longer term, however, it has upside potential.

Risk aversion picked up, and the Australian dollar trended into another twist

Early last week, AUD/USD fell as low as 0.748, or 2.1%, on rising risk aversion and a strong rally in the greenback. The Australian dollar gradually regained ground against the greenback as the latter currency turned from positive to negative, but remained below its previous high of 0.76. Since last week's close coincided with Christmas Eve, with thin market trading and low liquidity, the AUD/USD was at 0.76013, down 0.24% on the week. In addition, the lifting of lockdown in Victoria and the Black Friday shopping season boosted household spending and helped push retail sales up 7 percent in November, well above the previous estimate of 1.4 percent and economists' expectations for a 2 percent increase. Australia's preliminary trade surplus for November was A$1.958 billion, down from A$7.456 billion a month earlier, trade balance data released last week showed. Therefore, the relationship between Australia and China has once again become the focus. The Chinese government has not only imposed restrictions on Australian coal, wine, meat and cotton, but also banned timber from some parts of Australia last week. The Australian government last week filed a WTO complaint and began negotiations with China on the trade dispute. The future trend of Australia-China relations will still have a long-term impact on the Australian dollar.

Last One With recent unfavorable news,is gold and silver deep in trouble?
Next One USD continued to fall, is gold waiting for a breakthrough?
Latest Release
Popular Reading