Abstract: With the receding of political risks in the U.S. and the disclosure of optimistic data in the development of COVID-19 vaccines, the U.S. stock market has rallied recently. But the current strength of the U.S. stocks and the soaring bullish sentiment of the investors have raised questions about whether the fundamentals of the stock market can support such a strong trend. Let's take a look.

November's performance in the U.S. stock market, which has recently been in a buoyant mood, has sent investors into a frenzy. The waning political risk from the U.S. election and the positive news on the effectiveness of the COVID-19 vaccines have added to the heat on the U.S. stock market. The resumption of bipartisan talks on a new economic stimulus bill also revived bullish sentiment, helping to extend the stock strength into December. Besides, the U.S. markets do not appear to have in common with the anxiety that should have been exacerbated by renewed restrictions on economic activity as a result of the worsening COVID-19 crisis in the country; instead, U.S. stock indices are hitting record highs in the current situation and then greater short-term volatility will ensue, despite the imminent approval of vaccines and the Federal Reserve's long-term quantitative easing have long been bullish for U.S. stocks.

COVID-19 has weighed on U.S. stocks

In the last two months, the number of new infections and deaths in the United States has been skyrocketing, and health systems in several states are in crisis. Now the death toll is approaching its April peak. The seven-day average of reported fatalities rose to 2,201 on December 6, just one shy of the peak on April 18, according to Johns Hopkins University data, and new cases confirmed each day in many states are breaking records. But that's not the end of the story. Some states have reimposed economic blockades, but it's hard to change travel plans for Americans to reunite with their families around Christmas, so the pandemic situation in the United States could get worse.

For now, though, U.S. stocks are performing the opposite of the virus. On the one hand, the rapid progress in the development of COVID-19 vaccines convinces investors of that the US economy will return to normal, increasing investment confidence and making them price the stocks relatively positively. On the other hand, it is worth noting that recent economic indicators in the U.S. were much weaker, with the economy adding just 254,000 jobs in November, much less than expected. America's flagging recovery looked unlikely to be turned around in the near future, but the stock market seemed poised to soar into the sky. The weak economic data suggest that the current unstoppable rally was not supported by the fundamentals of the U.S. economy, and the driving force behind the stock rally is either an expectation, or an optimistic mood.

The market's optimism is not without reason, a key reason being the restart of negotiations over a small-scale, bipartisan $908 billion stimulus package. The looming shutdown of the federal government and the threat of a virulent virus to the economic recovery have made the package more likely. But the two parties are divided over its purpose. Sources say Republicans support aid for small businesses and vaccinations, while Democrats want to increase aid to state and local governments. Judging from the current market performance, investors seem to be gradually lowering their expectations for the size of the stimulus package (from $2.2 trillion to $908 billion), and now they are looking more for the speed at which a bipartisan deal can be negotiated.

How long can the risk-on tendency last?

More recently, the rise in the risk-on tendency has renewed the popularity of the U.S. stock as a risk asset. The gradual rise in yields on 10-year Treasury notes indicated a shift of capital from Treasuries to riskier U.S. stocks. Especially since October 30, the upward trend of the U.S. stock indexes has coincided with the rise of the 10-year U.S. Treasury yield, as shown below: 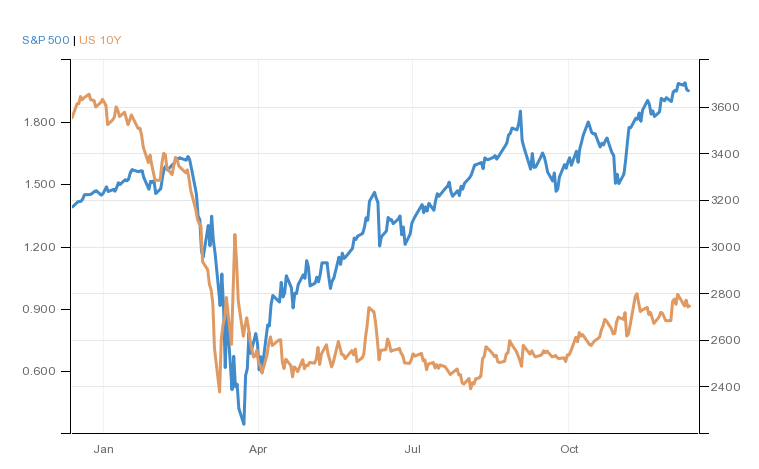 In addition, the plunge in safe-haven gold in November also suggests that risk sentiment has been boosted. However, the rally in gold prices this month and a slight drop in 10-year Treasury yields in recent days suggest the risk-on tendency is weakening. As a result, the pull between risk-on and risk-off may trigger turmoil in the U.S. stock market, so its upward trend may end.

As mentioned, good news on vaccine development and hopes for a stimulus package boosted investment sentiment and helped U.S. stocks move steadily higher in November. Airline stocks, energy stocks and travel-related stocks surged on the positive side of the vaccine development, pushing the U.S. stock indices above their all-time highs on November 9. And the upward trend of the S&P 500 was even more stable after November 24. It was shown below: 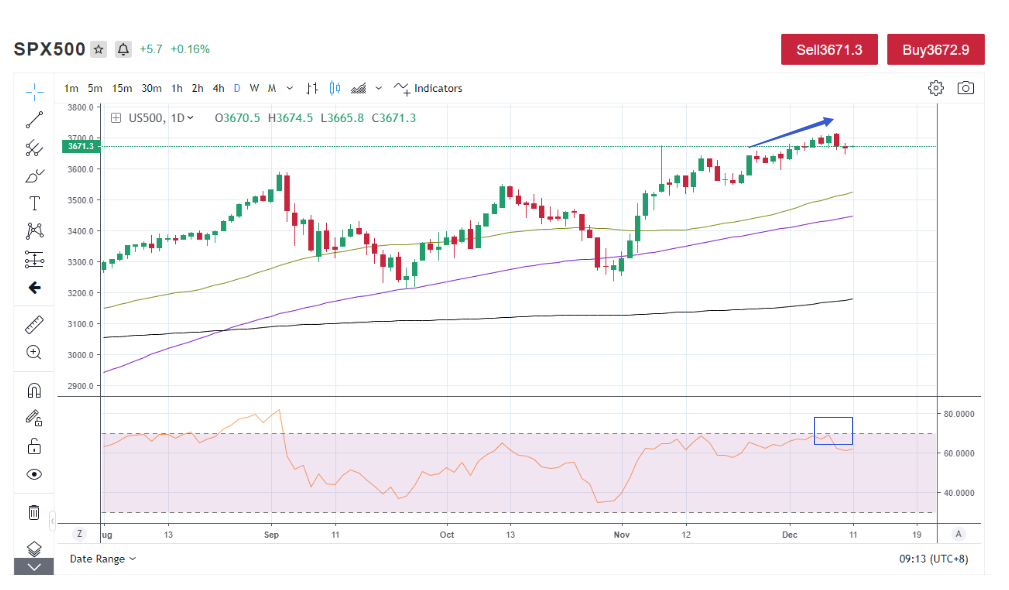 The bullish sentiment didn't end with the end of November, and it's been on full display since December. The S&P 500 broke another record at the start of December and managed to hit 3,700 on December 7. The Nasdaq 100 was even more impressive. As the COVID-19 worsened in the country, some U.S. technology stocks, supported by the stay-at-home economy, rebounded from the impact of the vaccine development, helping the Nasdaq 100 rise for nine straight days before breaking a record on the first day of trading in December, hitting 12,511 at one point. Subsequently affected by the uncertainty of a stimulus package, it fell back, as shown below: 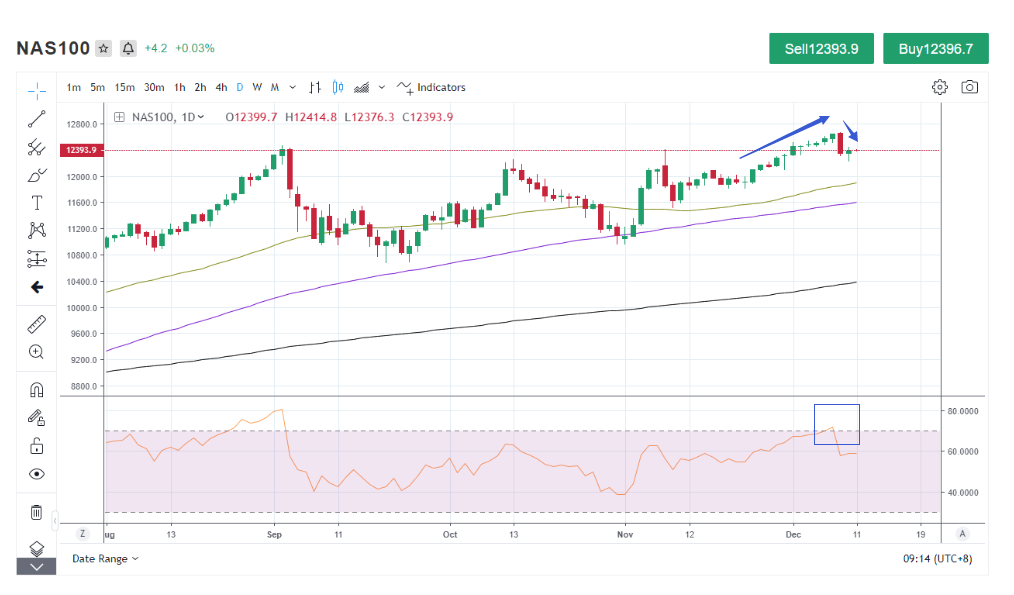 Both the S&P 500 and the Nasdaq 100 were close to overbought territory, which could mean that in the short-term investors are becoming less bullish on the U.S. stocks, or that bulls are becoming more cautious, or even that some of those bulls could take profits and leave the market. And at this juncture, the already-eager bears will take the opportunity.

To sum up, the U.S. stock is likely to remain bullish in the long run due to the macro economic environment and quantitative easing, but the deterioration of the COVID-19 and the uncertainty of the stimulus package, as well as overbuying of stocks, will weigh on stocks in the short term, So the surging U.S. stock could finally be heading for another pullback, and then make the stock market more volatile. However, recent moves in the U.S. stock market have been sensitive to relevant news, so investors should be aware of the risk of sudden changes as they seize the opportunity for a correction.