Stock Market Analysis: Economic recovery is speeding up, but US stocks may face a dilemma

Abstract: Although market optimism has been fueled by recent economic data which have pointed to a strong recovery, it has been accompanied by fears of higher inflation. Also, the progressing new stimulus is more like a double-edged sword for US stocks. What does the future hold for U.S. stocks amid a strong economic recovery?

The U.S. unemployment rate for March slipped to 6% as some 916,000 jobs were added, according to the country’s non-farm payrolls data for the month. This suggested that March is poised to be a long-overdue turning point for the labor market's recovery, which had lagged behind the economic pace. Meanwhile, the manufacturing and services PMI showed that the U.S. economy continued to expand as new orders surged last month, thanks to economic re-opening and accelerated vaccination. Another important factor in boosting U.S. stocks was President Joe Biden’s $2.3 trillion infrastructure plan. As a result, the S&P 500 managed to extend a break atop the 4,000 mark for the first time in its history. Going forward, the stock market will be dominated by whether the Fed raises interest rates sooner than expected in response to strengthening inflation expectations, as well as the long-term impact of Mr. Biden's infrastructure plan on the U.S. economy. And the potential risks of the U.S. stocks supported by macroeconomic policies have surfaced amid strongly positive economic data. What are the risks to watch out for?

Inflation fears may be return on back of better economic data, and there are signs of rising inflation.

1. Surging market demand causes higher inflation. Demand for goods and services surged as vaccination sped up and Mr. Biden announced early vaccinations for all American adults. The $1.9 trillion economic bailout that Mr. Biden signed into law also provided a direct boost to U.S. spending. Vaccinated Americans, aided by cash handouts from the U.S. government, have gradually resumed economic activity such as traveling, dining out and returning to the mall, a sign that U.S. consumption has begun to accelerate.

2. Rising manufacturing costs grow inflation fears. Many say supply-chain bottlenecks and rising raw material and labor costs are starting to have an impact. Therefore, some S&P 500 conponent companies are raising prices to cushion the impact of higher costs on corporate profits, according to the Financial Times. This creates an inflationary cycle, where rising prices of raw materials and labor costs lead to higher commodity prices, while demand increases.

It's worth noting that Treasury yields rose sharply as higher inflation erode the value of future yields and the present value of corporate's future cash flows, weakening demand for Treasuries. And when things go wrong, expectations for higher inflation tend to be more negative, leading to further trouble for the stock market. In addition, a spate of positive economic data, although providing good news for the market, sharpened the focus on how the Fed will adjust its strategy to deal with the complex condition of the U.S. economy.

Mr. Biden recently unveiled the biggest government investment since the Space Race between the U.S. and the Soviet Union in the 1960s -- a $2.3 trillion infrastructure plan. The plan was expected to include money for transportation improvements, boosting U.S. manufacturing to reduce dependence on China, and building affordable housing. Despite a booster for the sustainability of economic growth, the outsize costs need to be financed by higher corporate taxes. Thus, Mr. Biden's proposal would raise corporate tax rates from 21% to 28%, while Trump once cut it to 21% from 35% during his presidency. Mr. Biden would also impose a 21% minimum tax on foreign earnings of U.S. multinationals, remove an export incentive and increase taxes on foreign companies doing business in the United States. The U.S. stocks jumped on the news, showing the high sensitivity to the progress of the plan, although it has not yet been voted on by the House and Senate, with an unknown fate. If the infrastructure plan is approved, higher taxes could lead to a sharp drop in corporate profits and further negative impact on wages and economic growth, making Wall Street more volatile in the long term.

Opportunities and risks for U.S. stocks

1. Despite rising inflation risks, U.S. stocks are being supported in the short term by strong economic data and government bailouts. Then, Treasury yields, which briefly rose on the upbeat data, retreated from their highs, and the jitters in the stock market eased as investors realized that full employment is the Fed’s ultimate goal and their previous bets on rate hikes were overpriced.'

2. Over the medium to long term, U.S. stocks may be dominated by how Mr. Biden's infrastructure plan plays out. Undoubtedly, the corporate tax increase that is part of the plan had a negative impact. While the optimism about the plan offset the negative impact, it may be an indication that Democrats and Republicans have a long way to go in negotiating the plan.

Technical analysis of the S&P 500 Index

The S&P 500, which has risen steadily since late March, extended a break atop the marquee 4,000 mark on the back of Mr. Biden’s $2.3 trillion infrastructure plan. According to Bloomberg, traders bought stocks in record amounts in the first quarter of 2021, driving $372 billion into global equity funds. As a result, the surge in trading volume also contributed to high stock prices. However, the record gains were followed by little swings at the all-time high, probably a sign that traders are gauging the impact of market news on U.S. stocks, as shown below: 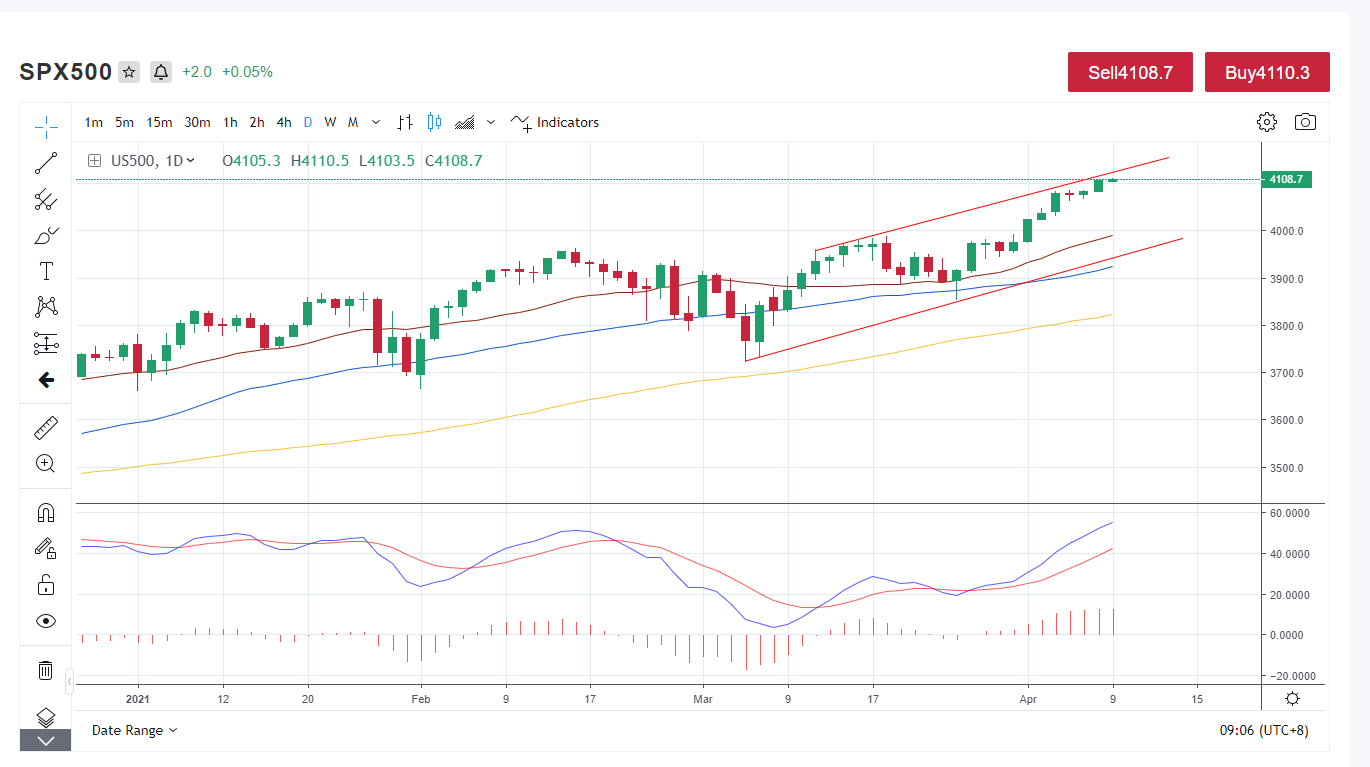 As for technical analysis, the S&P 500 broke through the psychological resistance at the 4,000 mark, indicating potential upside. And it is currently is in an uptrend and moves close to the 4,120 resistance, which is worth watching.

Therefore, not only the accelerated vaccination program and the restart of economic activity are driving forces, but massive government stimulus and eased monetary policy may also support the U.S. stock market. However, a sharp rise in inflation as a result of a strong economic recovery is likely to damp the bullish sentiment in U.S. stocks and consequently create a tug of war for Wall Street. Therefore, investors should seize the investment opportunities brought by the increased market turmoil when the news of strong economic recovery and the government’s stimulus are gradually digested by the stock market, and beware of the negative impact of higher U.S. bond yields.

Last One With recent unfavorable news,is gold and silver deep in trouble?
Next One Is the EU economy showing signs of recovery? Euro is rising rapidly!
Latest Release
Popular Reading