Abstract: The U.S. stock market is on the upswing again on renewed hope for pandemic prevention and control. Gold rallied in response to America’s plan to flood the economy with liquidity. The recurrence of risk appetite has pushed the Aussie higher. The euro fell after a short - term rally as ECB maintained its accommodative stance. As the good news was digested, oil prices failed to break above the resistance level and fell into a consolidation. 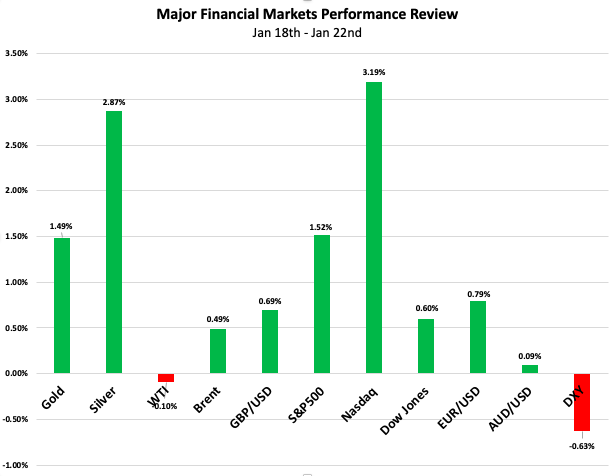 The three U.S. stock indices hit new highs last week. Stocks are back on an upward trajectory, buoyed by comments of “big action" at Finance Committee Hearing on Nomination of Janet Yellen to Treasury Secretary and expectations of the presidential inauguration. Later, Biden signed 10 executive orders on his first day in office, including measures to speed up vaccine production as well as vaccine distribution and vaccination, which restored the market's confidence in the future economic recovery of the U.S. and helped propel the U.S. stocks to further gains. Also contributing to Wall Street's gains was a report on the number of Americans filing new claims for state unemployment benefits last week of 900,000, below market expectations of 925,000. At the close of last week, the S&P 500, Nasdaq and Dow were up 1.52%, 3.19% and 0.60% at 3853.07, 13530.92 and 31176.01. See Nasdaq100 live chart below:

Many market analysts believe that the US stock trend in 2021 may be dominated by the vaccination and the pandemic control. In the short term, however, the focus remains on whether Biden's $1.9 trillion economic relief package will get through Congress. This week, the Fed’s monetary statement and interest rate decision, as well as the U.S. GDP data will be released, which will reveal the Fed's view of the current and future economic conditions, and of whether GDP has improved further.

Last week, the crude oil market ended its steep decline, rebounding amid the turmoil. It resumed its upward trend on optimism that the new administration of President Joe Biden would revive the U.S. economy and boost demand for crude. But API crude inventories recorded a rise of 2.562 million barrels last week, well above market expectations for a drop of 1.167 million barrels, so oil prices consolidated after several failed attempts to break through the February 2020 high. At the close of the week, U.S. crude and Brent crude were at $52.06 and $55.07, respectively, with U.S. crude down 0.1% and Brent up 0.49%.

In the IEA's energy outlook report for this month, the IEA cut its forecast for global oil demand in the first quarter of 2021 by 600,000 b/d and its forecast for the full year by 300,000 b/d, despite the recent surge in oil prices. Last week, China, a big oil consumer that has done well in combating the COVID-19, warned its residents not to travel during the Chinese New Year holiday, adding to the oil demand. While oil prices have been climbing sharply, the market seems to have priced in good news for the future trend. On top of that, news that U.S. President Joe Biden is suspending the sale of oil and natural gas leases on federal lands seems to suggest that the oil industry could become a new target for the Biden administration, which has long advocated clean energy, and that could have a negative impact on crude oil prices.

Last week, the dollar index fell amid volatility, reversing the previous strong rally. Among the main factors weighing on the dollar are：

2. Interpretation of U.S. Treasury Secretary Janet Yellen's comments at the hearing to support a market-determined exchange rate, by most market participants as a sign that the U.S. government might not prevent a sustained, market-driven depreciation of the dollar.

In addition, hedge funds pushed their net short dollar positions to the highest in nearly three years in the week ended Jan. 12, according to Commodity Futures Trading Commission data. At the close of the week, the dollar index was at 90.212, down 0.63%.

In contrast, gold rebounded after hitting support at 1800. On the one hand, the prospect of large-scale liquidity release has made gold an attractive hedge against inflation. On the other hand, a retreat in U.S. Treasury yields from their highs has eased some of the pressure on gold bulls. At last week's close, gold was at 1854.80, up 1.49% for the week. See gold price live chart below:

While gold bulls have enjoyed a brief respite for now, the rally in risk assets and optimism about the economic outlook could prove headwinds for the metal's rally.

The Australian dollar rallied as the country's economy continued to recover

AUD/USD rallied strongly at the start of last week. The recent sharp rise in U.S. bond yields and Joe Biden's $1.9 trillion economic stimulus have to some extent boosted the market's risk appetite, providing a good macro environment for the upside of the Australian dollar. In addition, the Australian government's generous budget and RBA's second round of economic stimulus measures have given full impetus to the recovery of Australian economy and employment, making the Australian unemployment rate drop to 6.6% in December from the previous 6.8%. However, retail sales data released last week showed a 4.2 percent month-on-month decline in December, sharply down from a 7.1% rise in the previous month and the biggest drop in nearly eight months. AUD/USD fell from its highs after the release. At the close of the week, the Australian dollar traded at 0.77095 USD, up 0.09% for the week. This week, the Australian CPI will be released, the previous reading of which was 1.6%. The RBA has previously set an inflation target between 2% and 3%, so the data could provide further inflation guidance and will be worth watching.

ECB maintained stimulus scale and EURO was under pressure at 1.22

Last week, bets that Biden would push for a bigger stimulus package weakened the dollar, helping to push the euro higher against the dollar. Besides, the ECB decided last week to keep monetary policy on hold and indicated that a fuller discussion could take place in March. At the same time, the governor of the central bank, Christine Lagarde, warned that the worsening of the pandemic and the prolonged economic blockade in the Eurozone would make the road to economic recovery difficult. Nevertheless, EUR/USD seems to ignore the negative comments and move back above the 1.21 level. Christine Lagarde later urged caution, pushing the euro back from its brief rally. At the close of the week, the euro traded at 1.21702, up 0.79%.

On top of that, the relatively slow uptake of the COVID-19 vaccine in Europe and the decision last week by Germany, the region's largest economy, to tighten its blockade and extend it until mid-February have cast another shadow over the European economy. According to Bloomberg, however, the European Union has drawn up a plan to strengthen the euro in international markets and weaken its dominance over the dollar, thus reducing the Eurozone's vulnerability to financial risks, including US sanctions, which may contribute to the gradual strengthening of the euro in the long run.

Last One With recent unfavorable news,is gold and silver deep in trouble?
Next One Surge or slump? Bitcoin is on a rollercoaster ride!
Latest Release
Popular Reading