US stock market analysis:Volatility increased! Explore the opportunities in the stock market

Abstract: As the US presidential election approaches, the US stock market has increased volatility! In addition, the Q3 earnings season is coming, and it is eye-catching whether US stocks are able to repeat the Q2 earnings performance and surprise the market. In the future, the upward trend of US stock market may remain unchanged, but short-term fluctuations are worth paying attention to!

The three U.S. stock indexes have recovered from their steep losses in early September and are rapidly climbing back to all-time highs. The S&P 500 rallied 8.5% since its September low to above 3,500. Unexpectedly, the Nasdaq led a rise in the three indexes this week, which seems to indicate that this index is returning to an upward trajectory, although not only did it fall sharply in September, but its recovery has been worryingly bumpy. The Dow's rebound was well ahead of the S&P 500 and the Nasdaq in September, reversing its usual laggards, as illustrated below:

COVID-19 cases are surging in the Midwest and western states as the U.S. enters what is expected to be a brutal fall/winter wave of the pandemic, thus making the current fundamentals seem incapable of supporting such a strong upward movement in U.S. stocks. Why are U.S. stocks so strong? What are the risks behind the upward movement?

"The battle between ""red states"" and  ""blue states"" has a significant impact on financial market. The sharp fluctuations in the U.S. stock market from October 2, when U.S. President Donald Trump was admitted to hospital with the new coronavirus infection, to his return to the White House fully demonstrate the impact of the U.S. election on the stock market. Subsequent polls suggest that Joe Biden has a larger lead over Trump, as shown below: 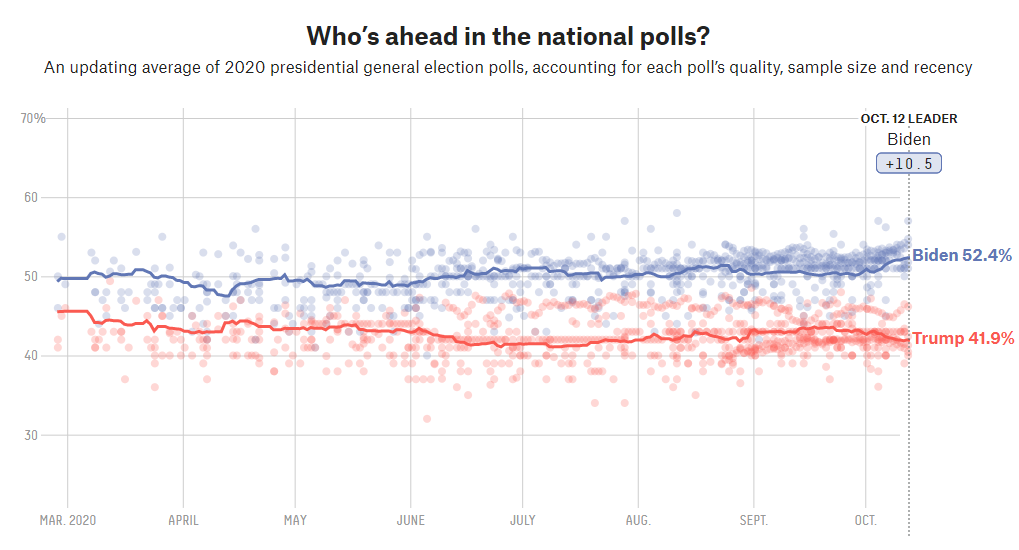 As the chances of a "blue state" victory increase, the markets believe that the new stimulus package will be passed more quickly and the Democrats are likely to expand the package if Biden wins the White House and the Democrats take control of the U.S. Senate. If Trump wins a second term, the U.S. stock market will continue to rise, because the greatest contribution of the Trump presidency has been to stimulate U.S. stocks to rise sharply. Hence, the battle between “red states” and “blue states” will drive U.S. stocks higher, regardless of its result.

U.S. stocks regained their momentum after House Speaker Nancy Pelosi announced plans to renew talks with the Republican-led Senate on a $2.2 trillion coronavirus relief bill. Negotiations over the Pelosi sought, however, have not been smooth but dramatic. Democrats were initially aggressive in moving the bill forward, but U.S. President Donald Trump called a halt and said no legislation would be enacted before the U.S. election. Then, in an unusual twist of fate, Mr Trump said he was willing to agree on the relief bill as soon as possible. Nancy Pelosi, on the other hand, dismissed the White House's latest roughly $1.8 trillion coronavirus relief offer as "insufficient". Still, the twists and turns haven't stopped U.S. stocks from rising. It also seems to suggest that the market believes the bill will pass, but it is only a matter of time.

In addition to the $2.2 trillion coronavirus relief bill dominating U.S. stocks, the Fed's QE has also helped push the stocks higher. It was particularly the case when the Fed said it would allow inflation to run slightly above the 2% target. Some officials expected to raise rates until the end of 2023 at the earliest. Thus, the Fed's QE is likely to be long term and should support U.S. stocks' upward trend in the long run.

What are the risks behind the U.S. stock market?

1. At present, the US stock market is subject to weak fundamentals, but investors seem to have ignored that. Instead, it is the election, the stimulus package and other outside news and volatile market sentiment that have more impact on the U.S. market. With the third-quarter earnings season approaching, fundamentals may be back in investors' minds, leaving the long-term problems facing the U.S. economic recovery at the center of the debate. While the slowdown in the economic recovery is clearly a fact of life, it is doubtful that third-quarter earnings will beat expectations as much as the second quarter.

2. The pandemic is wreaking havoc on the United States, and the efficacy of COVID-19 vaccines is worrying. The U.S. economy faces a fundamental threat from the virus, which would re-spread in winter. Although a growing number of vaccine companies are already in phase III trials, the results are still unknown. There has been a flurry of negative news about vaccines, with AstraZeneca and Johnson & Johnson, two of the biggest names in vaccine development, both suspending trials because participants fell ill. So this is going to be a long-term risk for the U.S. stock market.

Since breaking record highs, the three U.S. indexes have experienced a deep correction in early September, which most investors consider relatively positive and to some extent a risk release. In addition, some market participants believe that the U.S. stocks will likely remain upward, but with the possibility of varying degrees of correction. Judging from the current situation, the U.S. stock market did shake off the shadow of a correction, and was temporarily in an upward trend. Specifically, the S&P 500 broke through the key resistance level at 3550, which it repeatedly tried to hit before breaching its all-time high in early September, as shown below: 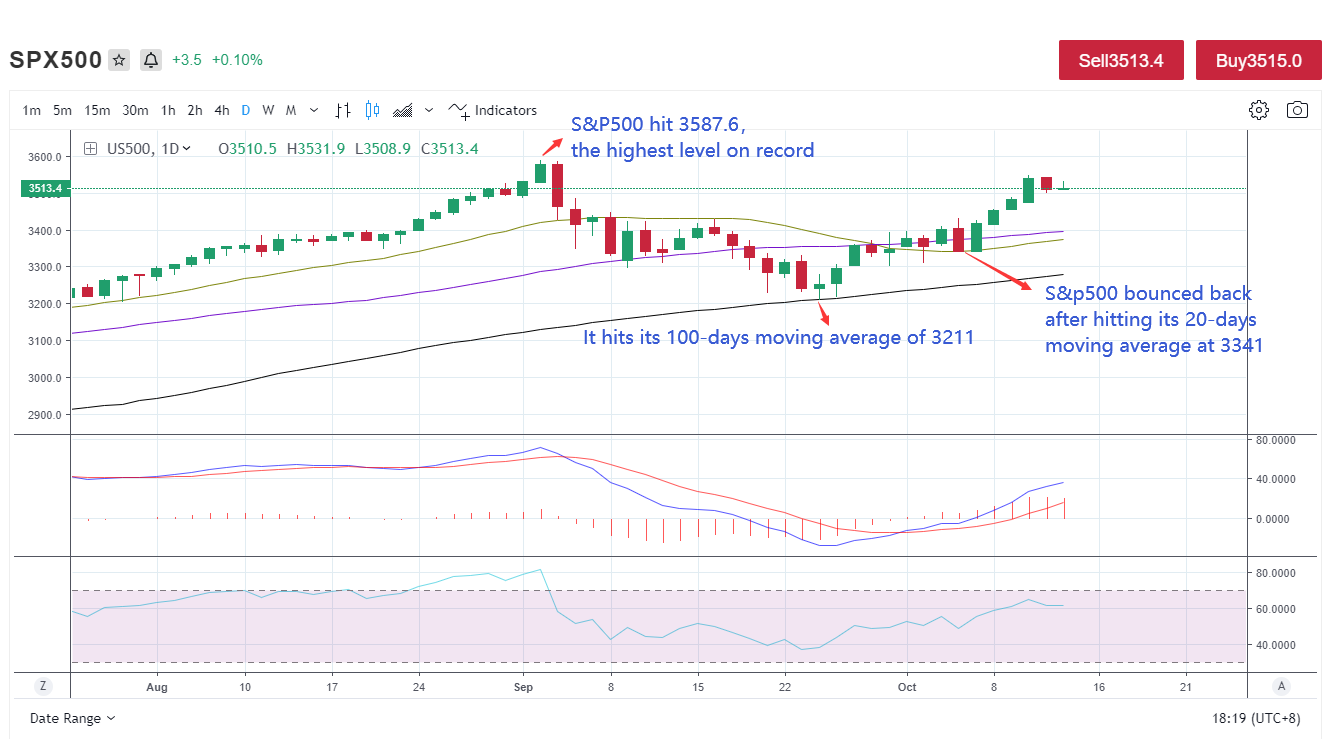 It bounced back after hitting its 20-day moving average on Oct. 6 and broke through its 50-day moving average before starting a four-day winning streak. Meanwhile, the MACD line passes through the signal line from the top down, further reflecting the strong upward momentum of the S&P 500. In addition, the market was not overbought since the relative strength index (RSI) was around 61, which could mean the bulls will be bolder. Going forward, if the S&P 500 has strong upward momentum, its resistance level will coincide with its all-time high of 3587. Conversely, if another correction for the S&P 500 starts on bad news, its support level could be at 3370-3340. The 100-day moving average of 3208 would be the next support level if it were to fall below that level.

In the long run, U.S. stocks are likely to remain bullish, but more volatile in the short term. While technical analysis suggests a likely upward trend, it may not adequately support bull market expectations in the current complex and volatile environment. Additionally, the upward path could be tortuous due to the election and could be influenced by third-quarter earnings and economic data released during the period. Therefore, investors should consider political risk and economic data, seize the opportunities brought by market volatility, and invest with caution.

Last One Understanding The Stock Market in 2020(Jargon/How it works/Candlestick Chart)
Next One How To Buy Shares in Australia? Buy International Shares vs Australia Shares?
Latest Release
Popular Reading