Gold awaits for upward momentum.When will it come?

Abstract: When will gold gain momentum? Good news from the OPEC meeting made oil prices expected to recover. The U.S. stock consolidation is not finished, and the dollar is entangled. AUD rallied. Will it remains strong? Negative interest rates may be coming and the GBP could be hit. 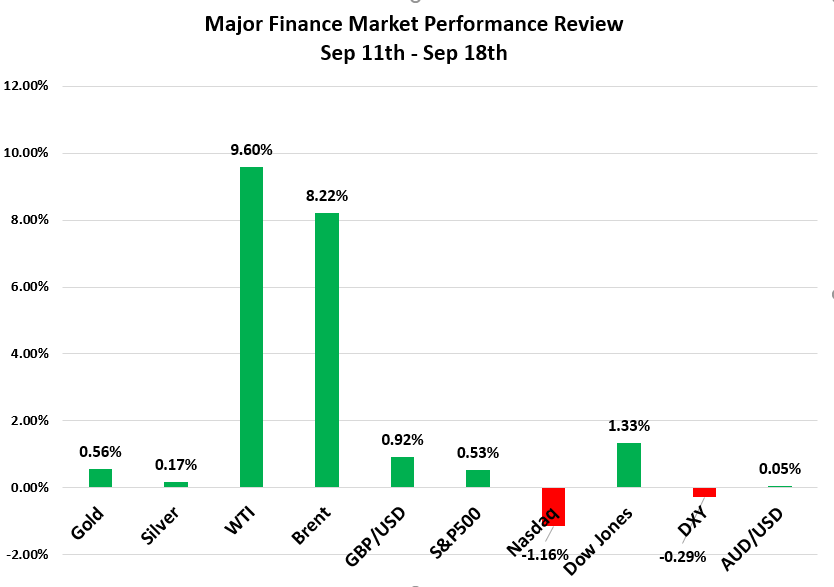 Last week, gold maintained its previous range-bound trend, without violent fluctuation. As U.S. dollar had been on an upward trend for some time in the past two weeks, some investors left the gold market for the metal. Restart of the Phase 3 clinical trial by AstraZeneca, a champion of the new COVID-19 vaccine, and U.S. President Donald Trump's claim that a COVID-19 vaccine will be available within weeks pushed gold below the $1,950 level as these pieces of positive news lifted risk sentiment and weighed on the metal. Gold then fell back above $1,970 an ounce as central banks kept their interest rates low for an extended period. But U.S. jobless claims hit 860,000 last week, the third straight week of falling below one million, sending gold from the upside down to around $1,930 an ounce. At the end of last week, gold was up 0.56% at 1950.3. See gold real-time chart below:

At this point, the metal has been trading sideways for nearly two weeks, and how to break through the current tight range has become the focus of investors. In the long run, gold will remain supported by the volatility of the US stock market and the weakness of the U.S. dollar, in addition to the approaching U.S. election, but positive economic data will fluctuate it in the short term, which is worth warning.

Last week, the world's three largest energy agencies released their oil market outlook for 2020. This time they cut their forecasts for oil demand growth in 2020, as shown below:

Despite gloomy global oil demand, U.S. crude briefly topped $40 a barrel last week after Hurricane Sally slammed into the Gulf of Mexico, halting part of U.S. production. In the same week, API and EIA reported a drop of 9.517 million barrels and 4.4 million barrels respectively, beating expectations and contributing to a sharp rise in U.S. crude and Brent crude. Thursday's meeting of the Joint Ministerial Monitoring Committee of OPEC+ further pushed oil prices. OPEC+ said it does not plan to impose further oil supply restrictions, but stressed the importance of strict compliance with the cuts and monitoring compensatory cuts by "cheating countries." In addition, Saudi Arabia's energy minister has been urging oil bears not to fight OPEC+. The two oil indicators broke major resistance levels, with U.S. crude topping $41 a barrel and Brent above $43 after the meeting. They achieved fourth consecutive positive results. By the end of last week, U.S. crude traded at $40.88 per barrel while Brent crude was at $43.06 per barrel, up 9.6% and 8.22% respectively.

The U.S. stock market is volatile and the dollar trend is still to the downside.

At the last Fed Open Market Committee meeting before the US election last week, the Fed chairman sounded a bit more optimistic about the economic recovery than usual, saying the Fed would continue quantitative easing and allow inflation to reach 2%. Unlike in the past, the Fed offered a long-term economic forecast that its interest rates will remain at zero until 2023 and that it expects unemployment to reach 4% this year. While the Fed described its forward guidance as "strong," it was still considered as dovish. Wall Street pared gains after the meeting, while Treasury yields rose as the Fed did not mention the specifics of its bond purchases. At last week's close, the Nasdaq fell by 1.16% to 10793.28 while the Dow and the S&P 500 rose 0.53% and 1.33% to 27901.98 and 3357.01, respectively. According to the data from last week, U.S. retail sales rose 0.6% in August, below market expectations of 1%, but marking the fourth straight month of growth and a sign that the economic recovery is slowing.

The U.S. Dollar Index fell back after the Fed raised its forecast for U.S. GDP this year to -3.7% from -6.5%, pushing it above 93. By the end of last week, the U.S. Dollar Index against a basket of currencies fell 0.29% to 92.999. Currently, there is much uncertainty about the trends of the U.S. stock market and the U.S. Dollar Index. On the one hand, time is running out for bipartisan negotiations on the new stimulus package, making it crucial to reach a significant deal before the U.S. election. However, the bigger worry is that if a stimulus package does not arrive sooner, the U.S. could fall into a deeper recession. On the other hand, as the U.S. election approaches, the risk of market volatility increases. The economic recovery will be further illustrated this week by purchasing managers' indices for the U.S. manufacturing and services sectors.

In the minutes of its meeting released last week, the Reserve Bank of Australia reiterated that the target cash rate would not be raised until progress was made on employment and inflation, and expressed optimism that Australia's economic recovery was now better than expected. The country added 111,000 new jobs in August, well above market expectations of 35,000, and the unemployment rate fell to 6.8% from 7.5% in July. And with fewer new cases of COVID-19, Australia's second most populous state, Victoria, is now easing its tight lockdown, setting the stage for an economic recovery. On top of that, an improving outlook for the Australian economy, high commodity prices and a weaker U.S. dollar helped the Australian dollar to its fourth straight gain. By the end of the previous week, the Aussie closed at 0.72844 against the U.S. dollar, up 0.05%.  See AUD/USD real-time price chart below:

But it is worth noting that Australian exporters of grain, meat and wine are under pressure due to the outbreak of COVID-19 and trade restrictions from China. The relationship between Australia and China will remain an important factor for the trend of the Australian dollar in the long run. Australian retail sales figures, due out this week, are still worth looking forward to because of strong retail sales growth last month.

The British economy is in bad shape. Is a Brexit deal within reach?

Last week saw the release of a raft of important economic data, all of which were disappointing enough to suggest that the road to recovery in the UK is headed for a bumpy ride. Unemployment edged up to 4.1% in the third quarter, up from 3.9%. Britain's CPI for August was 0.2%, down from 1% in July and the lowest in nearly four years. Despite these grim economic data, they did not deal a heavy blow to sterling. Additionally, with the coronavirus raging in the UK and the threat of a no-deal Brexit, the Bank of England has given its clearest signal yet that it could consider negative interest rates for the first time in its history and will be in contact with regulators on how to implement them. The pound fell briefly on the news and was even below $1.29 against the U.S. dollar before bouncing back. It managed a fourth consecutive rally last week, slightly reversing the negative impact of the Internal Market Bill. By the close, the pound traded at 1.2914, up 0.92% on the week. See GBP/USD real-time price chart below:

In the Brexit negotiations, Britain offered concessions on fishing rights, while the markets had thought breakdown after the House of Commons passed the Internal Market Bill. Separately, Ursula von der Leyen, the head of the European Commission, said a deal to leave the EU was very likely. The next round of Brexit talks will continue this week, with the chances of a deal still around 50-50. Meanwhile, UK Purchasing Managers Index data will be released this week after positive data, but it will be interesting to see whether the index can continue to improve due to the recent blockade of the UK economy.

Last One With recent unfavorable news,is gold and silver deep in trouble?
Next One US Dollar returns strongly, safe-haven gold is forced to give way?
Latest Release
Popular Reading