Abstract: Oil prices are expected to continue rising as supply tightens; U.S. stocks down from their highs since high yields become a time bomb; The weak market makes it difficult for gold prices to move up. The economic recovery is faltering and the euro is on the ropes. With commodities continued to rally, will Australian dollar rise against the U.S. dollar to 0.8? 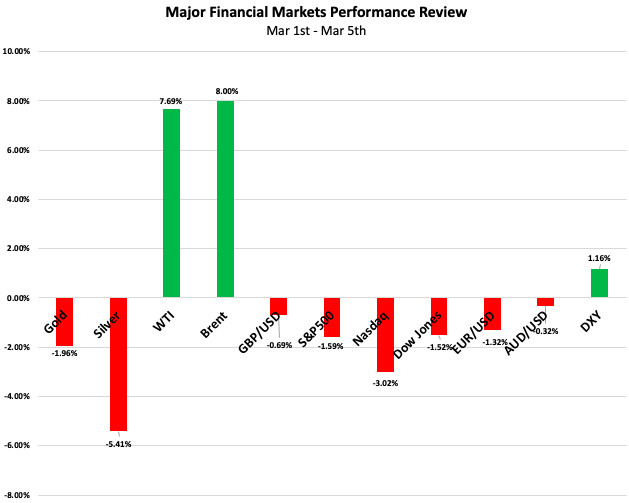 Crude oil prices continued to rise after last week's correction. Despite an unexpected surge in crude inventories, both U.S. crude and Brent crude remained strong on OPEC + 's decision to delay a supply increase until April. Last week, U.S. API and EIA crude inventories recorded a sharp rise of 7.356 million barrels and 21.563 million barrels, respectively, the biggest increases since November. On the other hand, U.S. EIA gasoline inventories fell by the largest amount since 1990, and refineries by the largest amount on record, reflecting the impact of blizzard conditions in Texas. U.S. crude and Brent crude traded near $62 / BBL and $65 / BBL after the data were released.

In addition, last week's OPEC+ meeting gave the market some reassurance, saying that all countries except Kazakhstan and Russia extended their crude output cuts, while Saudi Arabia did not cancel its previous voluntary output cut of 1 million barrels per day. Both crude indexes rose nearly 2% after the announcement, and hit their highest level since January 2020 on Friday. At the close of last week, U.S. crude and Brent crude traded at $66.26 and $69.55, up 7.69% and 8.00% for the week. See live Brent oil price chart below:

Going forward, crude oil prices are still optimistic. This is partly because of the tight oil market and the political turmoil in the Middle East. Oil prices, on the other hand, have been supported in the long term as global economic recovery and vaccination have accelerated, boosting risk appetite in the market.

Gold's decline accelerated last week. While the data published by the Automatic Data Processing (ADP) showed that employment in the private sector surprised on the downside, it did not reverse gold's decline. Instead, it helped spark another surge in Treasury yields, sending gold briefly below $1,700, its lowest level in nearly nine months. At last week's close, gold was at 1698.64, down 1.96% for the week. As repeatedly mentioned in the recent markets, the positive macroeconomic environment has become an important factor to suppress gold, so the future trend of the metal is still not optimistic.

Meanwhile, the greenback rallied strongly last week. The Fed's Beige Book showed the fact that accelerated vaccination has boosted growth prospects and the U.S. economy expanded modestly in the first two months of the year helped to boost the dollar. Additionally, the U.S. Dollar Index briefly touched 92 as Treasury yields climbed again. It ended last week at 91.985, up 1.16% for the week. As a result, the dollar is being supported in the short term by higher Treasury yields, although the recovery of the U.S. labor market is still a long way off. However, the apparent progress on the $1.9 trillion stimulus bill undoubtedly cast a shadow over the continued rebound in the dollar market.

The dovish view failed to solve the market panic, and the U.S. stocks jumped before falling

The U.S. stocks fell off its highs again last week. The three U.S. stock indexes rebounded strongly early last week after the U.S. Food and Drug Administration approved a vaccine made by Johnson & Johnson, raising expectations that the U.S. economy is getting back on track. Separately, the U.S. manufacturing PMI hit a nearly three-year high of 60.8%. And the PMI for the services sector, which has been battered in the United States, is still expanding. The above factors have formed an important support for the rise of U.S. stocks.

Fed Chairman Jerome Powell tried to keep up his dovish message to calm inflation fears, but it didn't seem to have much effect. He said the central bank was concerned about the recent rise in Treasury yields and inflation was likely to rise temporarily, but the Fed gave no indication that it would take any action to address the rise in government borrowing costs. The yield on the 10-year Treasury notes briefly rose more than 1.5% after the speech, and Wall Street gave up all of its gains. In addition, total nonfarm payroll employment rose by 379,000 in February, and the unemployment rate was little changed at 6.2%, much higher than expected, pushing Treasury yields higher. At last week's close, the S&P 500, Nasdaq and Dow were at 3,768.47, 12,723.47 and 30,924.14, respectively, down 1.59%, 3.02% and 1.52% for the week. See live S&P500 chart:

Subsequently, the U.S. Senate passed Biden's $1.9 trillion stimulus package over the weekend. As a result, as the market is optimistic about the economic recovery, the sharp rise in U.S. bond yields has become a time bomb for the U.S. stock market, possibly pushing it in turmoil in the future.

Commodities were surging and AUD/USD was on track to return to 0.8

Last week, Australia's monetary policy and interest rate decisions came as scheduled. The Reserve Bank of Australia kept interest rates on hold at a record low of 0.1% and pledged to buy $100 billion more government bonds in the coming months to keep government borrowing costs down. It also said it will not raise interest rates until the economy continues to grow strongly. After the decision, inflation concerns were removed and consequently AUD/USD rallied in the short term. At last week's close, the currency pair was at 0.7678, down 0.32% for the week.

In addition, the GDP data of Australia showed that the GDP increased by 3.1% in the fourth quarter of last year, and the figure shrank by 1.1 in 2020, which reflected that the Australian economy is realizing steady recovery. Australian retail sales fell short of expectations, mainly due to the economic blockade in Brisbane, Australia, which led to a 0.5% increase in February's retail sales. The Australian dollar fell from its previous high of 0.8 against the greenback last week as the latter rebounded strongly. However, given the ongoing heat in the commodity market, the possibility of a return to 0.8 in the near term remains strong.

The U.S. dollar rose strongly, while the euro broke below 1.2

The euro's decline continued last week. The European Central Bank was stepping up its bond buying in response to a recent sell-off in Eurozone bonds triggered by a surge in bond yields. And the road to recovery is not be smooth. PMI for the Eurozone's manufacturing and services sectors contracted last week at 48.4 and 45.7 respectively. Adding to the euro's struggles, Eurozone retail sales data showed European Union retail sales fell 5.9% in January, down sharply from a 1.8% rise in December. On top of that, the dollar's strong rebound added to the euro's downward trend, with the single currency briefly breaching the important level of 1.2 against the dollar. By the end of last week, the euro ended at $1.1911, down 1.32% for the week.

Despite the various policy tools used by the European Union and its member governments, the uncertainty created by the virus remained. At the same time, the slow pace of vaccination in Europe, compared with America and Britain, makes the euro's prospects look unattractive. Investors should keep an eye on economic weakness in the Eurozone and possible dovish comments from the European Central Bank that could weigh on the single currency again this week ahead of Eurozone GDP data and central bank interest rate decisions.

Last One With recent unfavorable news,is gold and silver deep in trouble?
Next One U.S. Treasury Bond Yields Rise: Why are US stocks in turmoil?
Latest Release
Popular Reading