Market Outlook: More market volatility is coming as OPEC and its allies finally reached a deal

■ The oil market was volatile due to OPEC+ agreed to boost oil output.

■ The dollar fell from its highs, while gold rose steadily.

■ The Aussie dollar struggled to support unemployment at a 10-year low. 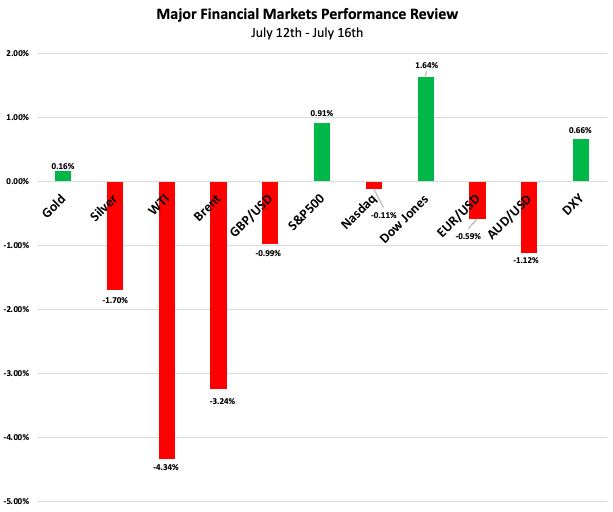 The oil market was rocked last week by growing uncertainty over an OPEC+ oil output deal and the prospect of a "definitive outcome" to Iran's nuclear talks. Market news that Saudi Arabia and the Arab world were working to resolve their differences over crude production fueled investor fears that a future OPEC+ supply increase would hit crude prices. In addition, the comments by Iranian Foreign Ministry spokesman Saeed Khatibzadeh that the nuclear talks had resolved most of the issues were likely to reignite concerns about the impact of increased supply from Iran on oil prices. Still, U.S. crude oil inventory data have been falling sharply for several weeks in a row as demand has surged. API and EIA crude oil inventories recorded a steeper drop of 4.079 MB and 7.89 MB respectively, better than market expectations. Crude oil prices were slightly supported by the data, but still struggled to overcome the pressure as the production deal was suspended. At the closed of last week, U.S. crude and Brent crude traded at $71.43 and $73.11, down 4.34% and 3.24% for the week. See Brent oil price chart below:

It is worth noting that the OPEC+ meeting was suddenly held last Sunday, the allies finally agreed to boost oil output, which increasing production by 400,000 barrels per day from August, and plan to completely cancel production cuts before September next year. As a result, affected by the ravages of the Delta variant and the increase in crude oil production, oil prices may fall in the short term.

U.S. stocks fluctuated at a high level after second-quarter earnings

The S&P 500 started the week higher on expectations of positive second-quarter earnings. However, the three major U.S. stock indexes retreated from their highs after the U.S. consumer price index (CPI) rose 5.4% in June from a year earlier, hitting a nearly 13-year high, raising concerns about the Fed's ability to contain current inflation risks. The spread of Delta variant and the slowing vaccination rate also impeded the upward movement of U.S. stocks. Still, U.S. stocks hit another intraday record after the Fed signaled in its testimony to Congress that they want the economy to overheat and will tolerate too much inflation in the near term. As of last week's close, the S&P 500 and Dow appreciated by 0.91% and 1.64% to 4,360.03 and 34,987.02, respectively while the Nasdaq traded at 14543.13, down 0.11% for the week. See S&P 500 chart below:

On the employment front, initial jobless claims registered 360,000, the lowest level since the COVID-19 pandemic began. This week, U.S. Markit flash purchasing managers index (PMI) readings for manufacturing and services would be due, after the manufacturing PMI posted a record 62.6, while the services PMI was still expanding despite a slight decline. On top of that, investors should be positioning themselves for the opportunity to capitalize on the volatility in stock prices brought by second-quarter earnings from companies like Netflix, Verizon, ABT, and Twitter that would be due this week.

Gold hit a four-week high last week, buoyed by inflation fears and comments from Fed Chair Jerome Powell. While the surge in U.S. inflation rate sent gold briefly below $1,800 an ounce, Mr. Powell said in testimony to Congress that the economic recovery was not making enough progress to begin trimming the Fed's monthly asset purchases. After the comments, Treasury yields fell while gold rallied strongly to as high as $1,830 an ounce, its highest level since mid-June. At last week's close, the metal was trading at $1,810 an ounce, up 0.16% for the week.

On the other hand, the U.S. dollar index rose sharply following the release of U.S. CPI data, briefly settling above 92.829. But it gave up most of its gains as Mr. Powell's comments in congressional testimony were seen as "dovish". Finally, the U.S. dollar index ended the week at 92.712, up 0.66%. In addition, Mr. Powell said that the Fed was trying to be transparent about tapering so as not to spook markets, such as the "taper tantrum" that occurred the last time the central bank tried to start tapering its bond-buying programme. This seemed to suggest that the tapering of quantitative easing would not come in the near term, and the dollar's gains could be hit.

The Australian jobs data released last week showed that the number of jobs increased by 291,000 in June, and the unemployment rate fell to 4.9% from 5.1% in May, the first time in nearly 10 years. Still, 33 million hours of work were lost across the economy as parts of Australia were locked down. This also directly reflected that the Delta variant has dealt a heavy blow to the Australian economy and job market. Separately, economic data out of China was mixed. Retail sales in China rose by 12.1% year on year, beating market expectations. But its GDP grew by only 7.9% year on year in the second quarter, missing market expectations of 8.1%. AUD/USD suffered a short-swing decline after the data but then recovered some of those losses. At the close of the week, the Australian dollar was at 0.7401 against the U.S. dollar, down 1.12% for the week.

This week, the minutes of the RBA meeting would be released. Although RBA governor Philip Lowe said persistently weak inflation could cause the country to lag behind other countries in raising interest rates, the central bank took the first steps to scale back its emergency stimulus at its previous rate-setting meeting. As such, investors should watch the minutes for further guidance on the outlook for Australian inflation and monetary policy.

The UK CPI for June overshot the BoE's inflation target, reaching 2.5%, the highest level since August 2018. That has sparked speculation that the central bank may consider withdrawing its huge stimulus programme. The pound rallied strongly against the dollar after the data. In addition, UK jobs data showed the overall unemployment rate remained at 4.8 % and the number of British people on payrolls surged by 356,000 in June, the largest increase since the outbreak. And inflation pressures were building from the UK's booming job market and rising wages. GBP/USD fell and then rose after the data, briefly approaching 1.39. At the close of the week,  GBP/USD ended at 1.3763, down 0.99% for the week. UK retail sales figures would be due out this week. Earlier figures showed retail sales unexpectedly fell in May as the government lifted restrictions on business, allowing more people to spend money at restaurants than in shops. Separately, the UK manufacturing and services PMI would also be released after the previous reading showed the strongest rise in economic activity since 1998. If the data is still strong, investors should watch for the possible tapering of quantitative easing.