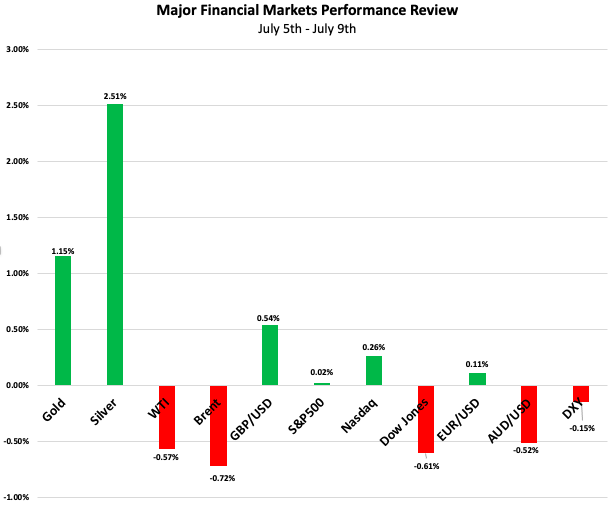 U.S. stocks hit new highs last week after Fed minutes showed policymakers continued to see elevated uncertainty about the economic recovery and debated tapering its bond purchases. And they were further supported by the sharp decline in long-term Treasury yields amid the weakening of inflation expectations. However, U.S. stocks fell on fears that the Delta variant could undermine the global economic recovery. As of last week's close, the S&P 500 and Nasdaq rose by 0.02% and 0.26% to 4,320.82 and 14,559.78, respectively, while the Dow depreciated by 0.61% to 34421.93. See S&P500 chart below:

On the economic front, the U.S. services purchasing managers' index (PMI) came in at 60.1% in June, below market expectations of 63.5%, fueling investor speculation that the U.S. economic recovery is slowing. Not only that, the 373, 000 initial jobless claims reported in the week were higher than the median estimate of 350,000, suggesting job growth could face a roadblock in the first half of the year. This week, the U.S. consumer price index (CPI) for June will be released, after the previous figure rose by 5% in May from a year earlier, the fastest pace in nearly 13 years, as inflation pressures continued to build. Last week, the International Monetary Fund said further fiscal support in the U.S. could exacerbate inflation pressures and warned that it might need to be prepared to raise interest rates sooner than expected because of the increased risk of sustained price rises. Therefore, investors should watch for the CPI data, which may reignite inflation fears.

Early last week, crude oil appreciated rapidly after OPEC+ canceled a meeting scheduled to agree on an increase in output, meaning that producers led by Saudi Arabia and Russia may not increase output in August. U.S. crude and Brent crude then reached new multi-year highs of $76.95/BBL and $77.82/BBL, respectively. The cancellation also showed no sign of easing the rift between key OPEC+ members Saudi Arabia and the United Arab Emirates. Despite a sell-off in commodities on the back of a stronger dollar, which reversed the month-long upward trend of oil, U.S. API and EIA crude inventories fell 7.983 million b/d and 6.866 million b/d, significantly lower than market expectations, helping push crude prices higher. At the close of last week, U.S. crude and Brent crude traded at $74.67 / BBL and $75.56 / BBL, down 0.57% and 0.72% for the week.

In the short term, oil prices could be pushed into a deep correction by the Delta variant and the risk of non-compliance by OPEC+ members due to the failure to reach a deal on production policy. But strong demand and the prospect of future supply shortages would support oil prices in the long term. The OPEC+ meeting could resume at any time, and investors should be wary of the uncertainty surrounding oil production that may bring volatility to the oil market until a deal is reached.

Treasury yields slipped, while gold gained support on the upside

At the beginning of last week, the price of gold rose steadily amid the continued transmission of the Delta variant. Separately, weaker-than-expected PMI data from the U.S. services sector added to speculation that the Fed may not be ready to taper its bond-buying program soon due to uncertainty about the U.S. economic recovery. As a result, 10 - and 30-year Treasury yields fell to their lowest levels in more than four months, pushing gold prices higher and briefly above $1,815 an ounce. Finally, the metal ended last week at $1,807.9 an ounce, up 1.15% for the week. See live gold price chart below:

On the other hand, the U.S. dollar index was prompted to extend its gains by the Fed's hawkish tone. But disappointing U.S. economic data pared the dollar's gains. Furthermore, Fed minutes showed that many officials believed the economy was recovering faster than expected, contributing to a sharp rise in inflation, and they talked about plans to taper bond purchases, though patience would be needed. The U.S. dollar index was muted after the minutes and it dropped by 0.15% to 92.102 at the close of the week. While the drop in Treasury yields weighed on the dollar, it could be somewhat supportive as the U.S. economy has fared much better than other large European economies in the face of the pandemic.

Last week, retail sales in the Eurozone went up by 4.6% month-on-month and 9% year-on-year in May, beating market expectations as the economy continued to recover. But the positive retail sales data did not push the euro higher as the Delta variant cast a shadow over the reopening of Europe's tourism industry and thereby hindered its economic recovery. Then the euro rose after the ECB’s interest rate decision as the market saw the new strategy as less aggressive than the Fed's flexible inflation target. The ECB agreed to raise its previous inflation target of 'below but close to 2%' to the level and allow room to overshoot it when needed. It suggested the ECB was struggling to reverse the low inflation that has been dragging down the Eurozone economy for years, so the decision would bolster its case for keeping monetary policy ultra-loose for longer. At the close of last week, the euro traded at 1.18746 against the dollar, up 0.11% for the week. This week, Eurozone CPI data for June will be released, after the core CPI came in at 0.9% for May, slightly lower than the previous reading. Investors should watch to see if the data improves.

AUD slipped as the virus continued to spread

Last week, the RBA announced its interest rate and monetary policy. The central bank kept the cash rate at a record low of 0.1% and said it could stay there until 2024. At the same time, the RBA decided not to extend its yield target beyond April 2024 and would slow bond buying from A $5 billion per week to A $4 billion (US$3.01 billion) per week in September. RBA Governor Philip Lowe said the new measures would provide the monetary support the economy needed to move from a recovery phase to an expansion phase. AUD/USD moved higher after the rate decision. But then the Australian dollar weakened and fell to a new low for the year as risk aversion increased due to the transmission of the Delta variant in Sydney, the country's largest city, and risks to the pace of opening up of the global economy. At the close of the week, AUD/USD dropped by 0.52% to 0.7485. Separately, Australia's unemployment rate was due to be released this week, after data showed the jobless rate unexpectedly fell to 5.1% in May, despite a reduction in government support for employment. The RBA has a target of 4% or lower to boost wage growth and inflation, so investors should watch to see if the data improves further.

Last One With recent unfavorable news,is gold and silver deep in trouble?
Next One Market Outlook: More market volatility is coming as OPEC and its allies finally reached a deal
Latest Release
Popular Reading