Abstract: The U.S. dollar weakened, while gold regained support. Crude oil prices extended their rally as the dust settled on an OPEC+ resolution. U.S. stocks hit new highs after a stimulus package gets renewed attention. The positive outlook for the economy sent the Australian dollar soaring. GBP may be in turmoil as Brexit deal is likely to fail. 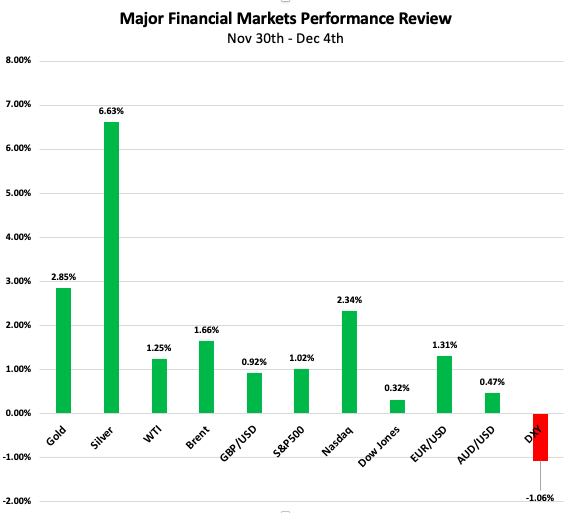 Post Contents [hide]
Gold bulls have taken a breather. Will the metal be back on its feet?

Gold prices rebounded last week as the market took a breather from the heavy selling of the precious metal. But before that, it got off to a bad start with positive trial results from vaccine maker Moderna and its plans to apply for vaccine approval in the US and Europe, as well as a surge in "digital gold" bitcoin. It fell as low as $1, 764 an ounce, its lowest level in nearly five months. Subsequently, renewed hopes for bipartisan fiscal stimulus sent the dollar into a tailspin, helping gold regain support. At the close of Friday, gold finally rose by 2.85% to $1, 838.5 an ounce. Against the dollar, the U.S. Dollar Index fell below 91 last week, its lowest level in 32 months. It weakened due to the continued quantitative easing signals from the Federal Reserve and the Treasury, despite the current lack of a new stimulus bill. Gold will get some support if the dollar weakens further, but in the short term it is subject to a degree of downside risk, mainly because the positive global economy and good news about vaccination have more than offset the negative impact of the worsening pandemic situation in many countries. In addition to the adverse elements of the fundamentals, there are multiple headwinds to gold in technical perspective, so the bulls may remain weak.

U.S. crude and Brent crude fell slightly at the start of last week after OPEC+ members failed to agree on 2021 output policy. API data also weighed on crude last week, showing inventories rose by 4.146 million barrels, sharply above market expectations of 2.358 million barrels. But then crude reversed course and showed a V-shaped rebound. This was partly on the back of good news on crude inventories from the EIA, which showed a decline of 679,000 barrels, better than expected; and the much-anticipated OPEC+ deal was finally reached, in which producers agreed to raise output by a modest 500,000 barrels a day beginning in January 2021. OPEC and its oil-producing allies also said they could increase production in February and March, but only if the market is affordable. In summary, OPEC+ provides more flexibility for subsequent increases and slows the overall rate of increase. As a result, the crude oil market regained its momentum, turning from a negative to a positive. By the end of last week, U.S. crude was trading at $46.11 a barrel and Brent at $49.04, up 1.25% and 1.66% for the week. While the supply side of the oil market is currently supporting oil prices, it is doubtful that the strong upward trend will continue as positive news on vaccine effectiveness are priced in and the global pandemic worsens. See WTI crude live chart below:

Good news about the vaccine development at the start of last week did little to reverse the stock decline after Thanksgiving Week. That decline, however, was quickly inverted by the imminent resumption of negotiations on a bipartisan economic stimulus bill. Although the negotiations over a small $908 billion stimulus package were still in limbo, the first phone call between the House and Senate reignited market hopes. In addition, the market was cheered when initial claims for state unemployment benefits fell to 719,000, the first decline in nearly three weeks. During intraday trading Thursday, the Dow was back at 30,000, while the S&P 500 and Nasdaq continued to hit new highs. Then they fell in late trading after Pfizer cut the doses of the Coronavirus vaccine from 100 million originally planned for this year to 50 million due to supply-chain problems. Meanwhile, Wall Street shrugged off last week's non-farm payrolls data that showed the U.S. economy added just 245, 000 jobs in November, much less than market expectations, and headed back to record highs. At last week's close, the S&P 500, Nasdaq and Dow closed at 3666.72, 12377.18 and 29969.52, respectively, up 1.02%, 2.34% and 0.32% for the week. In particular, the Dow Jones rose 12% in November, its best month in more than 33 years. See Dow Jones Index live chart below：

Separately, in his testimony to Congress last week, Fed Chairman Jerome Powell reiterated his concern about a worsening pandemic in the United States, said the economic outlook was "very uncertain" and pledged that the Fed would continue to use its policy tools until recovery was assured. This week, the U.S. CPI for November will be released. The CPI for October was unchanged, but the worsening pandemic may continue to weigh on demand in some industries, so November CPI is worth looking forward to.

The Australian economy is recovering and the AUD is climbing steadily

At the start of last week, the Australian dollar was down significantly as the conflict between Australia and China intensified and the U.S. dollar rebounded. However, the Reserve Bank of Australia's interest rate decision and positive GDP data sent it higher again. The Reserve Bank of Australia left its interest rates unchanged at 0.1% and promised $100 billion of government bond purchases over the next six months, and Chairman Philip Lowe said he was open to extending the program. The subsequent release of Australia's GDP quarterly rate has been positive. The data showed Australia grew by a better-than-expected 3.3%, marking the country's economy has emerged from recession and returned to growth. Not only that, Australia's trade surplus, released last week, was much bigger than expected, giving the currency another boost. At the close of last week, the Australian dollar traded at 0.7421, up 0.47% on the week. See AUD/USD live chart below:

GBP's recent moves have become increasingly sensitive to news of the Brexit negotiations. The pound had a strong start to the week on optimism about a deal to leave the EU and a weaker dollar. But it fell below 1.33 against the dollar Wednesday, its biggest drop in three weeks, after EU negotiator Michel Barnier said the main obstacles to a trade deal with Britain remained unresolved and there was no guarantee a Brexit deal would go through. Then, the UK government's approval of Pfizer's vaccine, making the UK the first western country to approve a COVID-19 vaccine, and the prime minister's comments that "the UK economy will recover strongly next year as the vaccine becomes available" sent the pound sharply higher, pushing it to a near one-year high of 1.35. At the close of last week, GBP/USD traded at 1.3437, up 0.92% for the week.

Currently, the talks are stuck on three big issues: the so-called level playing field for business, access to British fishing waters and how any potential deal is enforced. After reports that Britain was disappointed by new EU demands from France, French Europe Minister Clement Beaune said on Friday that a Brexit deal might not be reached. If the Brexit negotiations fail, the trend of GBP will be in shock, but it may get support from the depreciation of the U.S. dollar and the possible introduction of vaccines in the UK.

Last One With recent unfavorable news,is gold and silver deep in trouble?
Next One ECB extends bond-buying program: A bearish risk exists for the euro?
Latest Release
Popular Reading