Taper is about to start? USD stood several-month high!

Abstract: Gold came under pressure while the U.S. dollar rose strongly. Is the Fed about to start "tapering"? U.S. stocks took a pounding. Oil prices plunge amid fears of COVID-19 spreading. Euro fell below 1.17 as inflation overshot the ECB's target. The Australian dollar intensified its fall on weak jobs data. 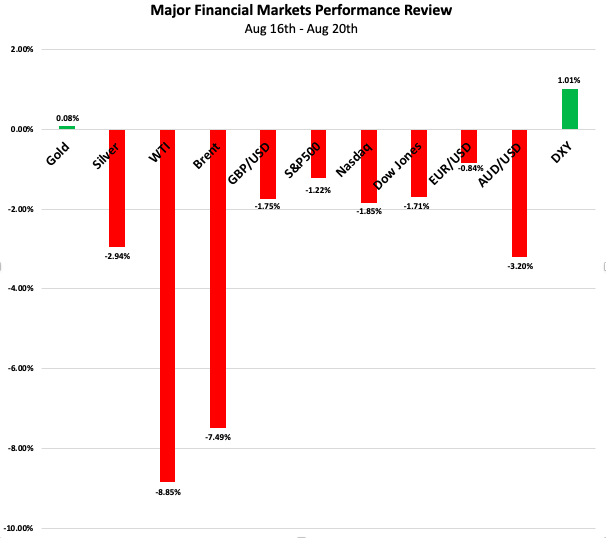 At the start of last week, gold maintained its rally and briefly traded above $1,795 an ounce, but then came under pressure after the release of the Federal Open Market Committee Meeting Minutes. Given progress on their inflation and employment goals, most Fed officials agreed last month that they would likely start to slow the pace of bond purchases later this year, the minutes showed. Gold dipped below the $1,780 mark before the minutes were released, but recovered slightly after the minutes. At the close of last week, gold traded at $1780.66 an ounce, up 0.08% in a week. See the gold price live chart below:

On the other hand, the U.S. dollar index plummeted after the Michigan Consumer Sentiment Index dropped to 70.2 in July, its lowest level since 2011. But lingering concerns about the global economic recovery forced investors to seek out the greenback as a safe haven, prompting it to rebound after falling last week. On top of that, the U.S. dollar index briefly reached 93.26, its highest level since April, after the Fed signaled that it would taper its bond purchases this year. At the close of last week, the U.S. dollar index was at 93.459, up 1.01% for the week. While tapering means the Fed won't flood the financial system with cash and thereby help the dollar rally, many Fed officials argued in the Fed minutes that the "substantial progress" toward maximum employment has yet to be achieved. Therefore, the Fed's "dovish" stance may act as a headwind for the dollar in the short term. Separately, this week's Jackson Hole Economic Symposium will see gold and the dollar in wild swings due to Fed Chair Jerome Powell's comments on tapering.

Is the Fed about to taper? U.S. stocks fell back

Stocks fell from record highs last week after U.S. retail sales data came weaker than expected and Fed officials signaled a pullback in bond purchases by the end of the year. The retail sales decreased by 1.1% in July, weaker than expected, as the virus continued to worsen and government stimulus measures were phased out. The decline partly reflected a potential shift in consumer spending toward services and a more cautious attitude toward spending as inflation rises. In addition, the Fed minutes showed that most officials thought the Fed had made progress on inflation and employment targets and would therefore likely slow the pace of bond purchases later this year. As a result, the S&P 500, NASDAQ, and Dow plunged after the data and ended last week at 4,405.8, 14,541.79, and 34,894.12, respectively, down 1.22%, 1.85%, and 1.71% for the week. See the S&P500 chart below:

The number of Americans filing new claims for jobless benefits fell to 348,000 last week, below market expectations, suggesting the current recovery in the U.S. job market is not threatened by the virus. This week, the US GDP and Personal Consumption Expenditures Prices (PCE) will be released. This came after U.S. GDP grew by 6.5% in the second quarter from a year earlier, below market expectations. Thus, investors should watch for whether this data will be affected by the resurgence of the pandemic.

Oil prices continued to fall as demand for crude weakened

Crude oil continued to decline last week after a sharp drop in U.S. Consumer Confidence. That was followed by weaker-than-expected retail sales and industrial production figures from China, a big consumer of crude oil. And a report from the country said that its refinery throughput in July hit its lowest level since May last year as some independent refineries cut fuel production. Still, the U.S. API and EIA data recorded sharp declines of 1.163 million barrels and 3.234 million barrels, which helped boost oil prices in the short term, but failed to reverse the blow to oil prices as the global economic recovery slowed due to the worsening pandemic. Furthermore, the dollar rose sharply, pushing U.S. crude and Brent crude to $64 per barrel and $67 per barrel, their lowest levels since May. At the close of last week, U.S. crude and Brent crude traded at $61.92 per barrel and $64.96 per barrel, down 8.85% and 7.49% for the week. Despite the bearish sentiment in the oil market, the EIA cut OPEC's output for the second half of the year, which could be an important support for long-term bulls as supply is likely to remain tight going forward.

Last week, Eurozone GDP data showed the region's economy grew by 2% in the second quarter from the previous quarter as restrictions on economic activities were lifted on the back of improving pandemic control. That was up 13.6% from the worst-hit period last year, but slightly below Eurostat's estimate of 13.7%. EUR/USD fell by as much as 68 pips to 1.17083 after the data. Separately, Eurozone CPI rose to 2.2% in July, above the ECB's 2% inflation target and the highest level in almost three years. Core CPI, which excludes changes in volatile food and energy sectors, came in at an annualized 0.9%. This was in line with the ECB's view that inflation would rise further mainly due to temporary factors, hence no necessity of a change in its monetary policy. While the Euro did not move against the dollar after the data, it fell below $1.17 on the strength of the greenback, its worst performance since November. At the close of last week, the Euro traded at $1.16949, down 0.84%t on the week. This week, the ECB minutes will be released, when ECB officials will provide insights into the Eurozone economy and inflation outlook. This came after the ECB raised its medium-term inflation target to 2% from "below but close to 2%", allowing inflation to exceed expectations if necessary. Therefore, investors should keep an eye on the minutes

AUD dipped below 0.72 as the tapering may be shelved

Last week, the minutes of the RBA's August monetary policy meeting suggested the economy might face a greater threat from an escalating economic lockdown across the country, which could force the RBA to delay tapering or even ease policy more. After the minutes, the Australian dollar fell against the greenback and the yield on the Australian 10-year Treasury note dropped to a new low in nearly seven months. On top of that, Australian employment data showed the worsening virus had restricted economic activity, leading to just 2,200 job gains in July. Meanwhile, many Australians gave up looking for work during the lockdown, driving down the labor force participation rate and pushing Australia's unemployment rate down to 4.6%, the lowest since 2008. AUD/USD broke below the 0.72 marks after the data, falling as low as 0.71263, its worst performance since November. At the close of last week, the currency pair traded at 0.7132, down 3.2% on the week. Australian retail sales figures for July are due out this week, after the date fell by 1.8% in June from the previous month, the biggest drop this year. As the virus continues to hit the Australian region, the data may still not be optimistic, which may make the Australian dollar into turmoil.

Last One With recent unfavorable news,is gold and silver deep in trouble?
Next One Oil Price Analysis: Is oil on track for new highs after a strong rebound?
Latest Release
Popular Reading