Something behind the US economic recovery that everyone wants to know

Instead of being contained, COVID-19 disease stepped into a massive fightback stage and thus has seriously hindered the restart of the global economy.

This made the U.S. economic rejuvenation a focus of international attention. Is the economy on the way to normalcy? Let's dive in.

Recent U.S. economic data have delivered a string of good results. Of them, the unemployment rate has fallen for two straight months, although a misclassification error made May's figures look better than it is, and June's non-farm payrolls data cheered investors.

But the resurgence of the pandemic has cast a shadow over its economic efforts for green shoots. While U.S. economic indicators are improving, the public leave the question of maintaining its upward momentum open. Then how is it progressing?

How economic indicators suggest the U.S. is recovering from its economic slump?

U.S. non-farm payroll employment skyrocketed by 4.8 million jobs in June, beating expectations for a gain of 3 million and dropping the unemployment rate to 11.1%, as shown below: 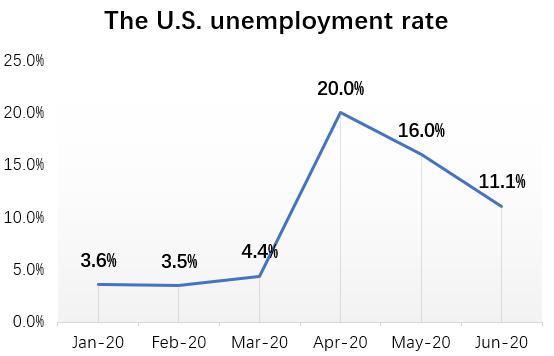 (Note: They were reported unemployment rates for April and May and had been adjusted to 20% and 16%, respectively)

The June non-farm payrolls data, despite a surprise, were collected in the week of June 12 before the second wave of COVID-19 led the U.S. to backtrack on reopening in the last two weeks of the month, so the figures might be not accurate. And what else hauls back the revival?

1. Initial jobless claims have dropped for 13 consecutive weeks in America, but are still higher than expected and at an increasingly slower rate of decline. The data also indicated a large number in unemployment, as shown below: 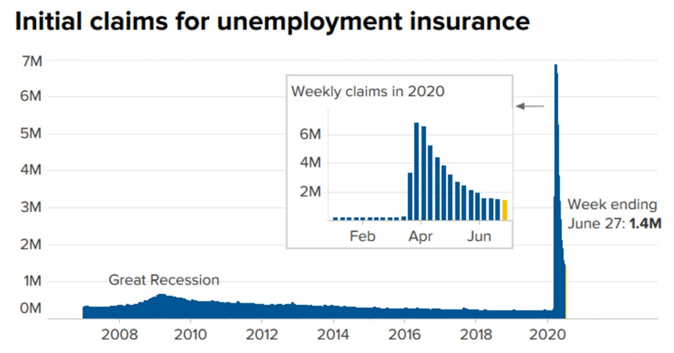 Source from: The Labor Department / www.cnbc.com

2. U.S. retail sales in June are of concern, in spite of a record high for May. It surged by 17.7% in May, far more than economists had expected, according to figures from the U.S. Department of Commerce, which further boosted the market. But the following two factors would destabilize June's numbers:

(2) A second wave of the pandemic in late June brought economic activity to plummet a second time.

So, June's retail sales figures may not be encouraging.

3. Personal consumption expenditure rose sharply, whereas personal income slumped. An increase in economic activities in catering services, hotels and public transportation sent consumer spending soaring in May. But it is doubtful that June's figures are as encouraging as May's, as the COVID-19 disease deteriorated: 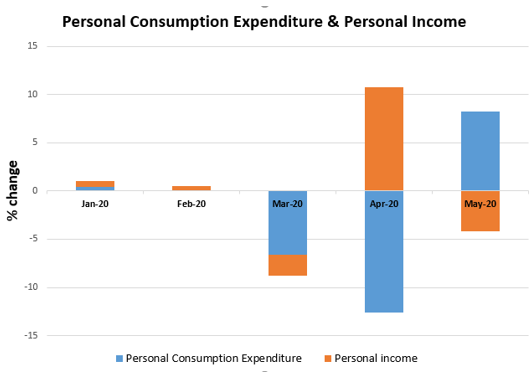 Source from: Bureau of economic analysis

What is the underlying driver of the US economic recovery?

The stimulus package might work, as the surge in personal consumption spending was partly the outcome of Fed's unlimited quantitative easing program. However, the government was considering scrapping the extra $600-a-week unemployment benefits in the coronavirus stimulus bill, which will end before July 31, and making tax cuts for businesses a priority in the next phase, said the United States Secretary of Labor.

In addition to the two short-term economic rescue strategies, the Fed may soon move to implement yield curve control, a novel method expected to to give Covid-ravaged U.S. economy a boost.

Yield curve control involves targeting a longer-term interest rate by a central bank, then buying or selling as many bonds as necessary to hit that rate target. Its ultimate goal is to keep interest rates within the central bank's expectations in the long run, which in turn reduces the cost of borrowing for governments and businesses.

However, the strategy will undoubtedly harm the self-regulation of bond market and free market. Thus, whether it can be implemented will become an important issue for debate at Fed meetings in the near future.

Will the development of a coronavirus vaccine be a major support?

People are desperate to get back to normalcy, and a vaccine against the coronavirus has been eagerly anticipated. But its development appears to have been less "rapid" than U.S. officials say.

Common vaccines are reported to typically take between 8-15 years to develop, and accelerated research into coronavirus vaccines may still take at least 3.5 years. So is the official U.S. view that a coronavirus vaccine will be ready in 12 to 18 months too optimistic?

Even if a vaccine is developed, its production capacity still faces huge challenges. According to the CFR, workers in health care and other key industries around the world need as much as 1 billion doses of vaccine for a single dose per person. In such case, some countries are seeking monopoly agreements with vaccine manufacturers to avoid shortages of their own demands.

This will inevitably lead to inequitable distribution and failure of a vaccine to immediately wipe out the coronavirus. (Sources: www.cfr.org)

What investment opportunities are noteworthy?

1. Gold. Gold price recently hit an eight-year high above $1,800 an ounce. It may continue to rise, but investors need to consider the pandemic, Fed's stimulus package, and changes in the international political and economic environment.

2. Stock market. In the short term, continued gains were spurred by better-than-expected U.S. jobs data. But in the long term, U.S. stocks are likely to come under pressure from a slower-than-expected economic recovery.

To sum up, despite the improvement in U.S. employment data and other economic indicators, the Fed's aggressive economic stimulus package will likely result in a setback for the dollar's international standing. Moreover, if the novel coronavirus is not effectively controlled in the U.S., the Fed's moves may be at great risk.

Last One How To Trade Gold CFDs in 2020? Gold Trading With CFD
Next One Attention! Gold and silver prices rocket, what will happen next?
Latest Release
Popular Reading