Nonfarm Payrolls Data Preview: May the non-farm payrolls data be a surprise with uncertainty over the job market?

Abstract: Market fears of a Fed rate hike are rising as the economic recovery continues to be strong and inflation soars. The U.S. non-farm payrolls data for April blew the market away and has created a conundrum for the Fed about whether to fight inflation or spur hiring. The tug-of-war between optimistic economic expectations and inflation concerns continues to rage on, so it will be interesting to see if May’s non-farm payrolls data provides further guidance to the market.

U.S. non-farm payrolls data for April disappointed markets, with just 266,000 jobs added, well below economists’ estimate of one million. The unemployment rate, which economists had predicted would fall to 5.8% as the economy recovered strongly and business activity reopened, rose from 6% to 6.1% in April due to a shortage of available workers. On the employment side, the leisure and hospitality industry continued to be the biggest contributor to April's non-farm payrolls, adding 331,000 jobs, while the rest of the service sector created 44,000. In addition, local government education, social assistance and financial activities increased by 31,000, 23,000 and 19,000 respectively. But business service and manufacturing sectors, which had both posted gains, saw sharp declines, as shown below: 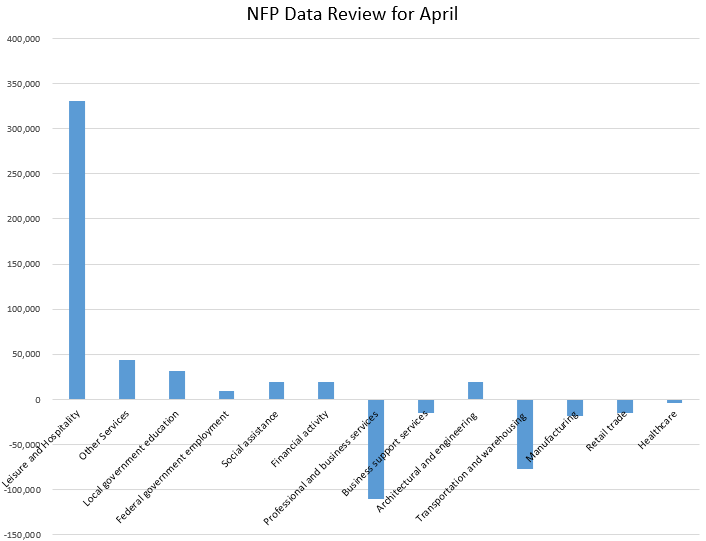 Although the April non-farm payrolls data was significantly worse than expected, market analysts believe that the widespread vaccination of COVID-19 vaccine, which has led to a sharp decline in new cases and hospitalizations, has eased restrictions on business and accelerated corporate hiring in the United States. Could the May non-farm payrolls data be as positive as the market expected? What difficulties are facing the U.S. labor market?

Now the U.S. labor market appears to be in a conflict between high unemployment and a struggle of employers to find workers. On the one hand, employers are having trouble finding workers in response to rising demand for goods and services. On the other hand, tens of thousands of Americans are dropping out of the labor force. That is reminiscent of a few months ago when Republicans who were worried that Americans were too dependent on government unemployment benefits vigorously opposed calls to increase unemployment benefits. Massive government unemployment benefits didn't seem to make sense for most people earning more than $32,000 a year, but they did make some lower-income people less willing to look for work, according to CNN. The latest manufacturing PMI data showed that U.S. companies were facing record backlogs of orders as they struggled to hire and failed to cope with strong consumer demand with hampered production and supply chains. McDonald's, Chipotle, Bank of America, and Under Armour, among others, have recently pledged to increase minimum and average wages for their employees in an effort to address the labor shortage. As a result, higher wages might improve the labor force by providing some incentive for the unemployed to look for work, but it may lead to further inflation.

New claims for U.S. jobless benefits continued their downward trend in May, falling to the lowest level since the outbreak, as shown below: 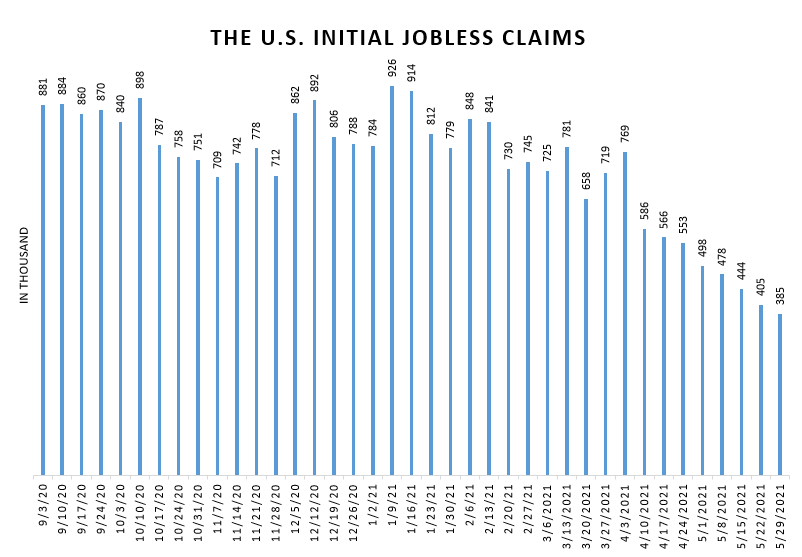 As the graph shows, the number of Americans claiming jobless benefits has fallen steadily since mid-April, which has certainly boosted optimism about the U.S. jobs recovery. While more than 8 million Americans are still out of work and initial jobless claims remain high, most agencies expect the U.S. economy added 600,000 to 700,000 jobs in May as new COVID-19 cases declined and government restrictions on business eased. If the data meets the expectation, a strong payrolls report could reignite investor concerns that the Fed may pull back from its stimulus program sooner than expected.

How will the data affect gold and US dollar?

1. Gold fluctuates at a high level, waiting for signs. Gold investors made muted reaction to the April non-farm data and many predicted that the Fed will maintain its ultra-loose monetary policy as the U.S. jobs recovery lagged despite rising inflation. However, the latest better-than-expected PMI data on manufacturing and services, as well as big jump in ADP private payrolls reignited fears of an early Fed rate hike, sending gold prices back below $1900 an ounce. Although gold is still bullish at the moment, a sharp improvement in May’s non-farm payrolls data could lead to another bout of volatility for gold prices in the short term. In the long term, gold prices may remain underpinned by fundamentals amid low interest rates and rising inflation expectations.

2. Inflation fears rise and dollar weakness remains. The bearish tone on the dollar continued as Fed officials repeatedly stressed that the uptick in inflation proves temporary and the central bank will maintain its ultra-loose policy. U.S. President Joe Biden’s massive government spending added to the dollar's woes. Not only that, but the dollar fell on recent concerns that U.S. manufacturing will shut down due to labor shortages, hampering the U.S. economic recovery. The U.S. non-farm payrolls data for April, which was much weaker than expected, sent the U.S. dollar index down nearly 0.7% on the day of release. If May’s data is positive, the dollar could get some respite as investors' fears about the Fed tightening its quantitative easing policy return.

Taken together, the dramatic decline in the number of new COVID-19 cases and the reopening of business have prompted improvements in the U.S. labor market. But the negative impact that the labor shortage will have on the U.S. economic and employment recovery cannot be ignored. As a surge in payrolls is seen by markets as a sign of further Fed action, May’s non-farm payrolls data is likely to be volatile for financial markets. Therefore, investors should be alert to extreme market turbulence and make portfolio adjustment in advance.