NFP is coming! Will Gold stage a big reversal？"

Abstract: The U.S. economy continues to recover, but the employment situation seems suffering. The risk-on sentiment, buoyed by good news about the effectiveness of vaccines, has pushed up the price of risk assets. The expected nonfarm payrolls data could return the market to fundamentals. But could the gold market, which is struggling at the moment, stage a big reversal? How did the U.S. job market fare in November? Let's have a look.

Non-farm payrolls rose 638,000 in October, while the unemployment rate fell to 6.9% from 7.9% in September, the seventh straight month decline since April. The October nonfarm payrolls data surprised markets again after a Dow Jones poll of economists showed respondents had expected non-farm payrolls to rise 530,000 and the unemployment rate to be 7.7%. For the industry sector, the largest increase in employment was in the leisure and hospitality sector, which was hardest hit by the COVID-19, with 271,000 more people employed. In October, as in September, the biggest drag on the labor market was government employment, which fell by 268,000, as shown below: 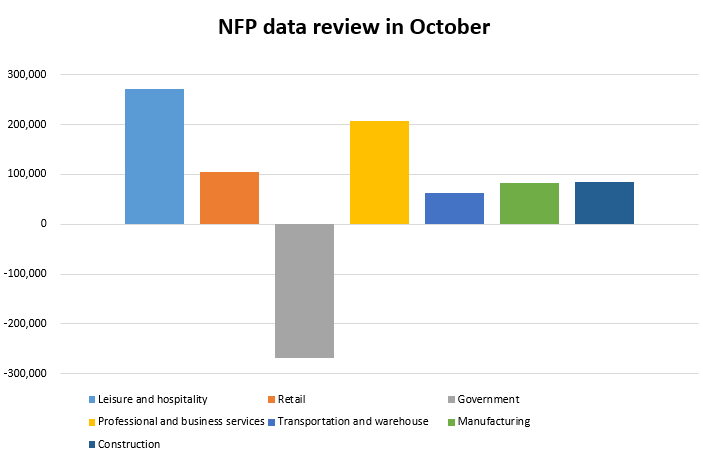 In addition, those reporting that they had been out of work because their employer had lost business or closed during the pandemic dropped sharply to 15.1 million from 19.4 million in September. It can be seen that the COVID-19 has had a huge impact on the U.S. labor market. And as the pandemic worsens in the US, what will November's non-farm payrolls reveal?

Initial jobless claims rebounded as COVID-19 pandemic is getting worse

In November, the COVID-19 pandemic again hit the US labor market hard. As the holiday season gets under way, the number of new infections in the United States continues to explode, making the United States one of the fastest growing countries in the world. As a result, the public places in part of the United States have been forced to close again, and some small and medium-sized businesses are facing shutdown. Weekly jobless claims show how the renewed economic lockdown is threatening the U.S. labor market again, as shown below: 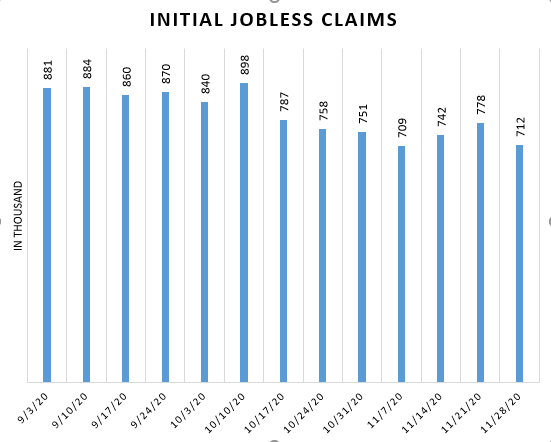 The number of U.S. initial jobless claims rose for a 2 straight week in November, but the yesterday's data showed that initial jobless claims decreased by 75,000 to 712,000 in the week ended Nov. 28, the first drop in three weeks.While weekly jobless claims have fallen below 800,000 for seven consecutive weeks, they are still well above pre-pandemic levels because of state restrictions on economic activities. And November's spate of positive news on vaccine development, although having cheered the market, is unlikely to change America's job woes any time soon.

Economic data are upbeat, whereas the employment market is struggling

While much of the U.S. economic data released in November was better than expected, the economic recovery and the state of U.S. employment diverged. ISM Manufacturing PMI released this week showed the U.S. economy expanded for a seventh straight month, posting a reading of 57.5 in November, down slightly from 59.3 in October. It is important to note, however, that the employment index recorded a reading of 48.4, down from 53.2 in October and indicating that employment is contracting again. On top of that, U.S. economy still sees sluggish spending on the service sector and weakening demand for labor-intensive sectors such as leisure and hospitality, so it is doubtful that November's employment recovery will be sustained.

What impact will the coming nonfarm payrolls data reveal on financial markets?

1. The gold market is in turmoil due to the positive news on vaccine effectiveness. As the increasingly enhanced risk-on sentiment, gold, as a safe haven asset, was sold off. Last week, the metal broke below its 200-day moving average and even below the key support level at 1800, while this week, it found support at 1764 to bounce back to $1840 an ounce. In spite of bearish sentiment undermining gold market, the US congress has to reaching a deal on the government budget and economic stimulus package promptly to avoid another government shutdown. Thus, the US dollar has fallen to a near 32-month low while gold may benefit from it. Additionally, if the nonfarm payrolls data do not improve as much or as expected, then gold seems to have some support.

2. The bearish sentiment in the gold market and the weakness of the U.S. dollar have triggered the enthusiasm for bitcoin investment. Bitcoin's recent surge to $19,848, breaking its all-time high for more than two years, has reignited a debate about whether it can replace gold as a hedge against inflation. Whether or not bitcoin threatens gold in the future, for now, the bitcoin market has come to a boil, and its price momentum is strong. But investors still need to be wary that as bitcoin prices soar, short sellers may take the opportunity to buck the wind, while bulls may take profits. Both are likely to drive the bitcoin market into wild swings, and investors need to be careful where they invest.

Last One How To Trade Gold CFDs in 2020? Gold Trading With CFD
Next One Gold price forecast- Gold market took a beat,will it make a comeback?
Latest Release
Popular Reading