According to most federal governments, the world is reaching the ‘bottom’ of the COVID-19 lockdown crisis.

From Washington to Berlin, Canberra to Vienna, Stockholm to Wellington, governments are starting and wanting their economies to open up. And this has been, and will be, reflected in their respective FX. The interesting point here is that as countries open up, they may find themselves ahead of peers on the economic output front.

Therefore, as we start this new month, a month that is being viewed as the switch month between a health crisis to an economic one, a review of the majors and their trading over this period is, in our view, warranted.

Considering most majors involve the USD, let’s review where the US stands.

The US is now the epicentre of the crisis with over a million people infected and over 70,000 deaths. The unemployment rate is ballooning with over 30 million US citizens finding themselves out of work while economic output surveys have hit record all-time lows. But the USD’s defensive nature coupled with its risk-free rates has seen it beating some but not all, despite its health and economic issues which could explain why most majors are below their pre-COVID levels.

USD/JPY has been ranging between ¥106.64 and ¥107.07 over the past few days, but it’s clear from the chart that the JPY’s safe haven is slowly ‘winning’ and it’s seeing the pair drift lower after a wild first pricing of the COVID-19 crisis.

EUR/USD has slipped back to $1.0840 levels as Europe battles the virus on several different fronts and German legal action over the course the ECB is taking puts the EUR under pressure. It is clear though that since the initial spike in the pair, it’s in a clear(er) range of $1.077 to $1.098.

GBP/USD at $1.244 is right in the middle of the trading range that has established itself after the initial reaction to the globe shutting down. Cable is pretty solidly bought at $1.23 and quickly sold off at $1.26. What could be interesting is with the UK now becoming the most affected European nation, restrictions may stay in place longer, leaving the UK under more economic strain than its peers. This could lead to GBP weakness.

AUD/USD in contrast is actually the one pair that has retracted over 75% of its initial falls. Be it the quasi-China trade, the fact that Australia has (so far) escaped the worst of the COVID crisis or that Asia as a whole has fared better than its other continent peers could all explain the pair’s performance. Its strength has been interesting but it’s possibly against convention considering its risk profile. There is support at $0.63 no doubt, but not a driver that could see it pushing the $0.66 level, and any test of this point would probably fail. 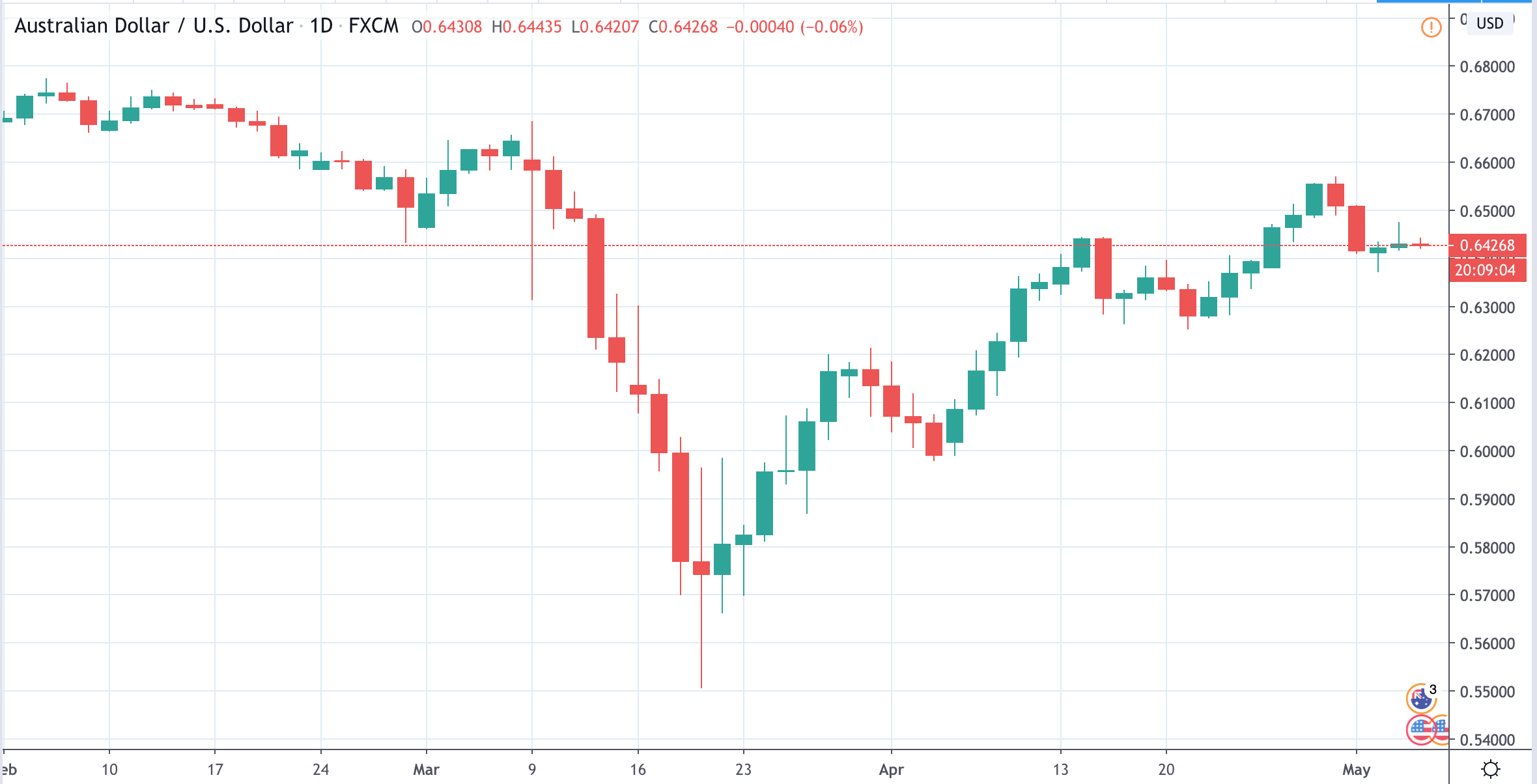 This information has been prepared by Mitrade. In addition to the disclaimer below, Mitrade does not represent that the information provided here is accurate, current or complete, and therefore should not be relied upon as such. This information does not contain a record of our trading prices, or an offer of, or solicitation for, a transaction in any financial instrument. Mitrade is not a financial advisor and all services are provided on an execution only basis. We advise any readers of this content to seek their own advice. Reproduction or redistribution of this information is not permitted.