Abstract: Gold stood at $1890 an ounce as inflation fears persisted. Did the Fed tighten QE? U.S. stock market volatility increased. Oil prices fell on news of progress in U.S.-Iran nuclear talks.Bitcoin plummeted as Crypto makret has been panic selling. As UK inflation caught up with U.S. figures, the pound may come under pressure.' 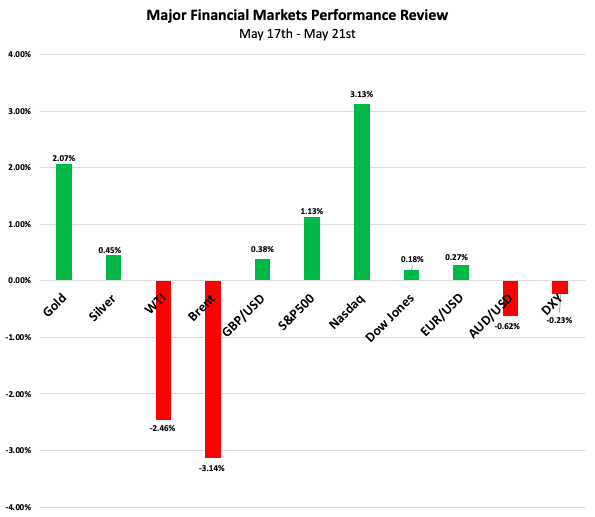 Last week, gold briefly rose above $1,875 an ounce on the back of a weaker dollar, rising inflation pressures and the intensified Israeli-Palestinian conflict. Not only that, the metal rallied strongly ahead of the April Fed minutes and managed to reach $1,890 an ounce, its highest level in more than four months. However, the minutes showed some Fed officials were willing to debate tapering QE at their upcoming meeting and could put the debate on the table next month, raising expectations of a rate rise. Gold quickly fell by nearly $30 after the minutes were released. At last week's close, gold was trading at $1,880.3 an ounce, up 2.07% for the week. See live gold price chart below:

As cryptocurrency prices fell sharply, it seems that some of the money in the cryptocurrency market is moving into gold to counter rising price levels. Going forward, gold prices are likely to remain supported by stronger inflation expectations, but in the medium to long term, investors need to watch carefully for central bank interest rate hikes. On the other hand, the U.S. dollar index fell below the 90 mark due to falling U.S. bond yields and a sharp rise in gold. But U.S. bond yields climbed to near 1.7% and dollar bulls rallied strongly after the release of the Fed minutes. Finally, the U.S. dollar index ended the week at 90.092, down 0.23%. As the Fed may continue to remain dovish in the short term, the dollar keeps weak. But the weakness may be reversed if the Fed brings forward its rate hike plan due to higher inflation in the future.

U.S. stocks would be at risk as interest rate hike expectations rose

Last week's Fed minutes showed the central bank might slow its pace of asset purchases if the economy continued to recover rapidly, sending yields on 10-year Treasury notes higher and stocks briefly lower. Later, better-than-expected earnings from U.S. retail store Walmart helped Wall Street rebound from its lows and gave falling technology stocks a respite. At last week's close, the S&P 500, Nasdaq and Dow were at 4,159.12, 13,535.74 and 34,084.15, respectively, up 1.13%, 3.13% and 0.18% for the week. See S&P500 chart below:

Although stronger inflation expectations raised concerns about an early Fed rate hike, the U.S. labor market is still not performing as well as before the outbreak of the COVID-19, so the Fed may be more cautious about tapering QE. The number of Americans filing new claims for jobless benefits last week came in at 444,000, much better than market expectations and a sign that the labor market is steadily recovering. This week comes ahead of the release of U.S. second-quarter GDP data estimate, after the first-quarter figures showed the economy grew at a 6.4 per cent pace, the best performance since the third quarter of 2003, on the back of accelerated vaccination and massive government spending. Thus, investors should see whether the data will continue to deliver sustained improvement.

Last week, oil prices swung amid inflation fears and important developments in U.S. -Iran talks. U.S. crude and Brent crude retreated from highs of $66.99 / BBL and $70.22 / BBL on fears of above-target inflation and investor risk aversion to commodities. Progress in the nuclear talks between the U.S. and Iran raised concerns about increased supply from Iran, which threw the oil market into a supply-demand imbalance. In addition, U.S. crude prices fell after API and EIA data reported stronger-than-expected increases of 620,000 barrels and 1.3 million barrels, respectively. At the close of last week, U.S. crude and Brent crude traded at $63.85 / BBL and $66.66 / BBL, respectively, down 2.46% and 3.14%.

Going forward, oil prices may fall into short-term volatility due to growing expectations of QE tightening and the new wave of the COVID-19 in parts of Asia. But in the longer term, increased demand for oil as the big economies reopen will support higher prices. Last week, U.S. oil refineries in the Gulf of Mexico were threatened by changes in the weather, so investors will be watching for the impact of this week's EIA crude inventory report on prices.

Cryptocurrencies were falling across the board, with the price of Bitcoin plunging

The price of Bitcoin plummeted after Elon Musk said Tesla would not accept Bitcoin as payment, wiping out more than $300 billion from the cryptocurrency market. Although Elon Musk added that he had no plans to sell his Bitcoin, the price of the cryptocurrency fell as low as $30,000 as panic selling resumed after the Chinese government cracked down on cryptocurrency trading. Afterwards, Cathie Wood, CEO of Ark Investment Management, a well-known Bitcoin investor, and Elon Musk came out to rescue the market.  Cathie Wood believed the price of Bitcoin will reach $500,000, and Elon Musk said that Tesla has diamond hands, which means he will hold on to Bitcoin until the end, no matter how much the market swings. Bitcoin rose by 30% to $40,000 after these comments. However, a JPMorgan analyst said poorer Bitcoin liquidity had caused institutional investors to move money out of the Bitcoin market and into gold over the past two quarters. In the future, the market may not continue to rally, but as some big investors are still bullish on Bitcoin, the likelihood of a sudden fall is very low  relatively limited in the short term.  See live BTC/USD chart below:

Last week, UK figures showed that unemployment fell to 4.8% in the first quarter amid the country's strict blockade restrictions, and the number of the unemployed fell by 151,000 in April, beating market expectations for a rise of 256,000, as the government prepares to loosen restrictions across the board, boosting optimism about the UK's employment. GBP/USD managed to break above 1.42 after the data. In addition, UK CPI data released last week suggested that the inflation rate rose by 1.5% year on year in April, up sharply from 0.7% in March and the highest level since March 2020. As a result, GBP/USD was hurt by the sharp improvement in the CPI data, as the BoE had said it would closely monitor the CPI data before deciding whether to reduce bond purchases. But the record PMI data from the UK helped currency pair reverse earlier losses. Finally, GBP/USD ended the week at 1.4147, up 0.38%. Sterling rose sharply as BoE officials had signalled their intention to tighten QE and upgraded the outlook for the UK economy. In terms of technical analysis, the resistance level for GBP/USD on the upside is likely to be at 1.424 and thus investors should pay attention to it.

Last One With recent unfavorable news,is gold and silver deep in trouble?
Next One Gold Price Analysis: Are the bulls back as gold breaks above $1900?
Latest Release
Popular Reading