U.S. stocks suffered a slump due to shocking CPI figures 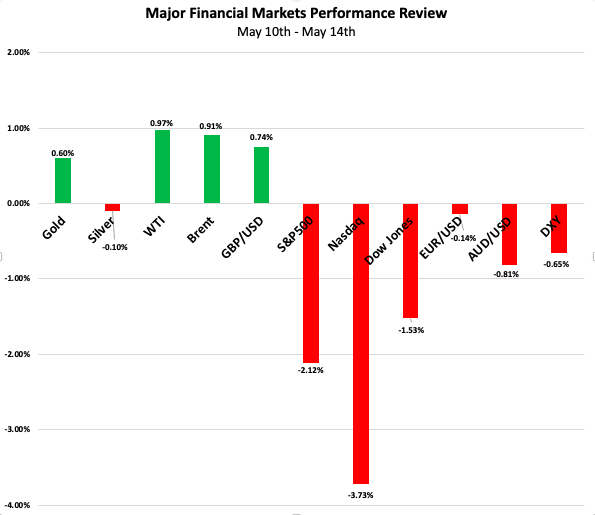 U.S. stocks retreated from record highs at the start of last week amid fears that soaring commodity prices, stoked market inflation expectations, would drag down a strong economic rebound. The rising inflation expectations were starting to expose investors to the overpricing of U.S. stocks, sending the Nasdaq, which had been surging, down sharply. On top of that, U.S. inflation leaped 4.2% in April from a year earlier, the highest level in nearly 13 years, according to consumer-price data released last week, as the U.S. economy restarted and energy prices rose. The yield on the 10-year Treasury note jumped as high as 1.7% after the data was released, sending all the three major U.S. stock indexes sharply lower. Not only that, but the U.S. producer price index (PPI) data also gave a clear signal of stronger inflation. It surged 6.2% in the 12 months to April, the biggest gain since records began. But the blow to Wall Street from the stronger inflation expectations was offset by new claims for jobless benefits falling below 500,000 for the first time. At last week's close, the S&P 500, Nasdaq and Dow were at 4,112.5, 13,124.99 and 3,4021.45, down 2.12%, 3.73% and 1.53%, respectively, for the week. See S&P500 Chart below:

This week, the minutes of the Fed's most recent policy meeting will be released. It will be interesting to see what the Fed says about the overheating in the face of rising fears about inflation expectations, after Fed officials reiterated last week that the uptick in inflation will likely prove temporary.

Oil prices declined from their highs as U.S. pipeline restarted

Crude oil prices rose sharply early last week after a hacking attack on the largest U.S. pipeline sparked a panic scramble for oil. A government report showing U.S. crude oil inventories fell to their lowest level since late February and API and EIA crude inventories fell by 2.533 million barrels and 427 million barrels last week sent a positive signal for the rebalance of oil supply and demand, fueling the price rally. U.S. crude and Brent crude rose as high as $66.6/ BBL and $69.88/ BBL before falling off their highs as the U.S. pipeline restarted and the IEA cut its forecast for oil demand. Finally, U.S. crude and Brent crude closed the week at $65.46 / BBL and $68.82 / BBL, up 0.97% and 0.91%, respectively. More recently, crude oil has risen along with commodity prices as bets that the global economy will gradually recover from the COVID-19 pandemic have spurred demand, and massive government stimulus efforts have led to higher inflation expectations. Still, the new wave of the pandemic in Asia could be a headwind for oil prices.

U.S. bond yields soared while gold prices crashed back down

At the start of last week, Treasury yields continued to slide while gold extended its gains, again breaking above $1,840 an ounce. But then the yields counterattacked, resulting in a short - term plunge in gold, once down nearly $30. At last week's close, gold was trading at $1,842.1 an ounce, up 0.6% for the week. As inflation expectations continued to rise and fears of a Fed rate hike grew, gold's path to the upside remained choppy.

The U.S. Dollar Index, on the other hand, initially fell below 90 last week, but financial markets were reeling from the biggest year-over-year rise in U.S. Consumer Price Index (CPI) in more than a decade, with the 10-year Treasury yield spiking to 1.7%, the biggest rise since March. At the same time, the U.S. Dollar Index quickly pulled up nearly 0.7%. But the dollar fell again after the U.S. retail sales data for April failed to improve, leading to a fall in Treasury yields. At the close of last week, the U.S. Dollar Index dropped by 0.65% to 90.304. Since Fed Vice Chair Richard Clarida said last week he was surprised by the rise in CPI and they would not hesitate to act to bring inflation down to its goals if needed, the possibility of the Fed raising interest rates in advance increases. Thus the dollar may be supported further.

Last week, Australian Prime Minister Scott Morrison unveiled a huge budget to boost the economy's recovery, aimed at running the economy hot by adding jobs, rising wages and reviving inflation. Meanwhile, Treasurer Josh Frydenberg promised billions of dollars in new spending, abandoning the government's longstanding quest for a balanced budget to revive the economy. Another move by China's Dalian Commodity Exchange to lower its requirements for standard iron content in a bid to expand sources of supply also helped undercut the Australian dollar. The fall in global risk assets and the sharp rise in the U.S. dollar exacerbated the downward trend in the risk currency AUD. As a result, AUD/USD briefly broke 0.77 and ended the week at 0.77796, down 0.81% for the week.

This week, the Australian unemployment rate will be released after March data came in higher than market expectations at 5.6%. Also due this week will be the minutes of the Reserve Bank of Australia (RBA), which had said in April that the economy was recovering better than expected and was in no hurry to tighten its quantitative easing. In the context of the government's massive budget, how will the RBA assess monetary policy this time?

Last week, UK GDP showed that the economy contracted by 1.5% in the first quarter of 2021, better than market expectations, even as the nationwide blockade continued to depress economic activity. The UK reported its first zero COVID-19 death in 14 months, suggesting that the economy is expected to rebound sharply this year as blockades were phased out and the economy reopened. At the start of the week, GBP/USD extended gains to break above 1.4142, the highest level in more than a month. Then, the sharp rise in the U.S. CPI triggered a plunge in global stock and bond market, sending UK bond yields to their highest in about two months and stoking expectations that the Bank of England (BoE) will raise rates sooner than expected. The currency pair fell from its highs as a result. At the close of the week, sterling was at 1.4093 against the dollar, up 0.74% for the week. See GBP/USD Live Chart below:

UK unemployment rate and UK CPI will be released this week. This followed an unexpected drop in the unemployment rate in March in spite of a clampdown on economic activity between December and February, and a rise in CPI from 0.4% to 0.7%. Also, the BoE had said that with the labor market still weak, there is likely to be less upward pressure on CPI in the medium term, but it is expected to reach 1.9% by the end of the year. Thus, investors should focus on whether the data will improve.

Last One With recent unfavorable news,is gold and silver deep in trouble?
Next One Is gold stumped by rising interest rate expectations?
Latest Release
Popular Reading