Abstract: U.S. bond yields soared while U.S. stocks were sold off. The gold market was in a haze, sending out a signal of the loss of momentum. Oil prices showed strong gains, so the OPEC+ meeting needs to be watched. The Australian dollar hit its highest level in nearly three years after the Reserve Bank of Australia aggressively bought bonds. Vaccination accelerated, and the pound surged. 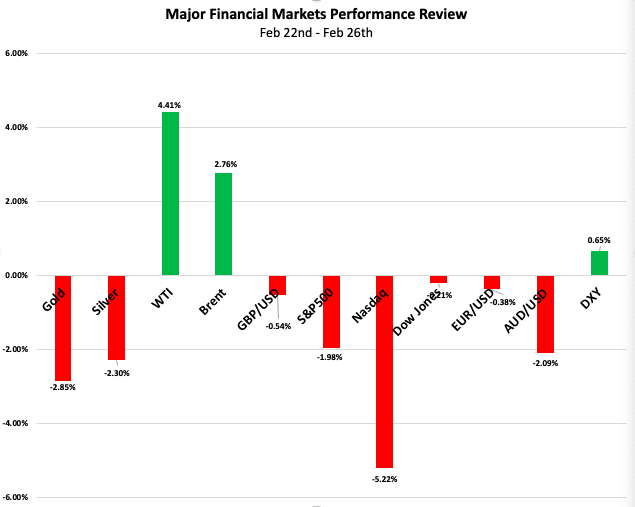 Last week, the U.S. stock market suffered a "meltdown". Investors' fears of inflation intensified after a rare spike in Treasury yields, with the yield on the 10-year note briefly soaring as high as 1.6%. The spike also led to a massive sell-off in bonds. Still, the Fed said the surge in bond yields reflected optimism about the U.S. economic recovery. Then, U.S. stocks tried to rebound from last week's losses as Fed Chairman Jerome Powell reassured the central bank had no plans to tighten its quantitative easing too soon, easing concerns about interest rate hikes and inflation. But it eventually failed and fell as U.S. debt continued to surge. At last week's close, the S&P 500, Nasdaq and Dow were at 3,829.34, 13,119.43 and 31,402.01, respectively, down 1.98%, 5.22% and 0.21% for the week. See live S&P500 chart below:

On the economic front, the U.S. reported last week that GDP growth for the fourth quarter of 2020 was 4.1%, slightly higher than the 4% estimate released a month ago. Initial claims for jobless benefits came in at 730,000, well below market expectations of 841,000, suggesting the U.S. is sending a positive signal that its economy is improving. This week, the non-farm payrolls data will come, and the extent of improvement in the U.S. employment is worth the market attention. In addition, this week's PMI data on manufacturing and services will provide investors with a guide to the progress of the U.S. economic recovery.

U.S. bond yields continued to rally, while gold is suffering

Gold bottomed out last week, but there is still a lot of resistance ahead. Gold, which had been in a positive rally at the start of last week, suffered another setback as the yield on the 10-year Treasury note rose sharply. As of last week's close, gold fell to 1732.53, down 2.85% for the week. See live gold price chart below:

There has been little news in the market lately that has been bearish on gold. On the one hand, the continued economic recovery, fueled by accelerated vaccination, has hit the market's demand for safe havens. Stronger inflation expectations, on the other hand, have failed to make gold's anti-inflation work and have instead increased risk-on sentiment, pushing up the prices of riskier assets. Going forward, the upside for gold remains difficult, but when the market is fully aware of the risk of inflation, gold may become a favorite again.

In contrast to gold, the dollar's recent strength has been surprising, driven not only by the accelerating U.S. economic recovery but also by rising Treasury yields. By the end of the week, the U.S. Dollar Index closed at 90.929, up 0.65% for the week. With the Fed last week reiterating its commitment to support the economy and massive stimulus being on the way, the dollar remains on thin ice.

Last week, the oil market continued its upsurge pattern, with U.S. crude and Brent crude breaking above $63 / BBL and $67 / BBL, respectively, to mid-year highs. Crude oil production has recovered 80% after severe snowstorms in Texas. API and EIA crude oil inventories unexpectedly increased by 1.026 million barrels and 1.285 million barrels last week, but this did not affect the overall price rally. By the end of last week, U.S. crude and Brent crude traded at $61.53 / BBL and $64.4 / BBL respectively, up 4.41% and 2.76% for the week. See live Brent oil price chart:

As crude oil prices continued to surge, major investment institutions also raised their forecasts for 2021 oil prices. Bank of America said Brent crude could reach $70 / BBL by the second quarter of 2021 and average $60 / BBL for the year. Goldman Sachs was even more ambitious, predicting that Brent crude will hit $75 a barrel by the third quarter. Nonetheless, short-term risks to the oil market cannot be ignored. According to Reuters, sources said OPEC+ will likely discuss the possibility of raising oil production at its upcoming meeting this week, and make a focus on whether Saudi Arabia will cancel its 1 million BPD voluntary output cut due to end next month, and whether OPEC+ will decide to increase output.

AUD/USD rallied strongly last week, briefly breaching 0.8, its highest level since February 2018. The recent commodity boom has been an important factor driving the Australian dollar sharply higher. But three-year yields subsequently fell as Australia's central bank bought A $5 billion ($4 billion) worth of bonds to defend its position as the world's biggest commodity exporter. As a result, the Australian dollar fell slightly against the U.S. dollar. By the end of the week, AUD/USD closed at 0.7703, down 2.09% on the week.

In terms of the Australian economy, the Wage Price Index released last week showed that the wages unexpectedly rose slightly from 0.1% to 0.6%. That partly reflects an easing of cost-saving wage cuts imposed by companies as a result of the previous economic blockade. Although the employment in Australia is still improving slowly, the overall economy is in a strong recovery. This week, Australia's GDP data will be released again to focus the market's attention on the process of economic recovery in Australia. In addition, the upcoming RBA rate decision and monetary policy announcement will be particularly important as they reflect the RBA's attitude to the current situation during the global bond sell-off.

The U.S. dollar rallied strongly, while GBP fell after a surge

GBP/USD rallied to 1.42 last week after breaking 1.4, and then retracted. But it has been the best of the many currency pairs this year. On the one hand, the success of Brexit and the continued weakness of the U.S. dollar have boosted the pound. On the other hand, important progress in the vaccination in the United Kingdom offset the negative impact of the British economic blockade. Additionally, recent worries about the Bank of England's plans for negative interest rates seem to have been put on hold by optimism about a rebound in Britain's economy. All of the positive news has formed an important reason for sterling to move higher. GBP/USD climbed to 1.4243 last week, then faltered as the dollar rallied on Treasury yields. By the end of the week, GBP closed at 1.3932 against the dollar, down 0.54% for the week. Then, British Prime Minister Johnson announced plans to gradually ease the strict infection control measures for the COVID-19 in March, with schools reopening this month. Therefore, the gradual recovery of the UK economy makes the market more optimistic about the future trend of GBP.