Surge or slump? Bitcoin is on a rollercoaster ride!

Abstract: Bitcoin reversed again and its volatility intensified. Vaccination was slow and WTI oil has failed to hold $53 a barrel. The dollar rebounded strongly while gold was in trouble. A short squeeze made the U.S. stock market jittery. Can weak Australian Dollar become strong after RBA interest rate announcement? 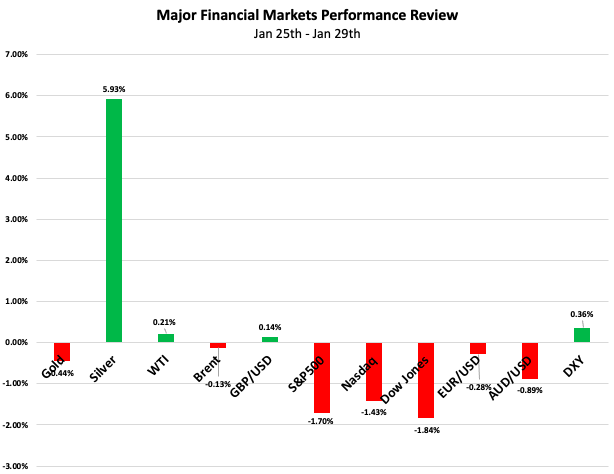 Last week, the Bitcoin market was rocked again. After breaching $35,000 early last week, it fell below an important resistance level of $30,000 to be as low as $29,156. In part, the collapse suggests that the bull market in the currency is on shaky ground. Last week, Scott Minerd from Global Macro Opportunities Fund spoke again about Bitcoin, saying that institutional investors alone won't be enough to keep its price above $30,000. The Bank for International Settlements has also warned that Bitcoin is inherently risky. So investors must be aware that it is likely to collapse completely. In addition, as BTC wanes, the U.S. stock market has a miracle stock -- GameStop (GME). The stock rose more than 700% in a week as retail investors collectively went long on it, causing some hedge funds to run short. At the same time, analysts pointed out that the fall in Bitcoin prices early last week may have been the result of investors shifting assets out of the Bitcoin market into other markets, such as GME, that are more profitable in the short term. On Friday, however, Elon Musk changed his Twitter profile to just "#bitcoin" and the currency then surged close to $5,000, briefly breaching $37,000 before quickly retracing to the $35,000 mark. Despite this, its persistent bulls still believe that the long-term fundamentals have not changed, but that volatility will become more intense.

Last week, oil prices rebounded from earlier losses as Iraq promised to compensate for production cuts under the OPEC+ deal and Libya was threatened with possible supply disruptions due to unpaid wages by Petroleum Facilities Guard. Last week, API and EIA inventories fell by 5.27 million barrels and 10 million barrels, respectively, much more than expected, helping to push oil prices higher. But the Fed's cautious pessimism about the economy sent the VIX soaring 54% to 35.37, triggering another sell-off in risk assets and giving up most of those gains. At the end of last week, WTI crude and Brent crude were trading at $52.17/BBL and $55/BBL, respectively, with U.S. crude up 0.21% and Brent down 0.13%.

Going forward, crude oil prices appear to have temporarily peaked and the risk of a further correction is increasing. Oil prices could face headwinds on the upside as the market has priced in the good news for the oil prospects, and as the spread of Coronavirus variety, tighter blockade measures and slow vaccination damped hopes for a recovery in oil demand.

The Fed provided a downbeat view of economy outlook, but gold was unimpressed

Last week, the Fed's downbeat economic outlook and continued doves failed to reverse the downward trend of gold. Some analysts said gold remained in the dark as investors focused more on the Fed's optimistic tone on vaccinations and saw it as a sign of a strong economic recovery in the second half of the year. Also weighing on gold was the possibility of a delay in Mr. Biden's larger economic stimulus package, raising concerns about the ability of an economic rescue plan to get through Congress. As of last week's close, gold traded at $1846.72/ounce, down 0.44% for the week. See gold price live chart below:

On top of that, silver had an outperformance last week, thanks largely to a reference to the metal on Reddit's Wallstreet bets, with retail investors flocking to the silver market, sending the metal soaring as much as 6% to hit 26.96 on Thursday. At last week's close, silver was at 26.98, up 5.93%.

On the dollar index, it rallied again due to uncertainty over the massive stimulus plan and the Fed Chairman's cautious tone on the slowing of the economic recovery. By the end of last week, the dollar index was at 90.533, up 0.36% for the week. Although the dollar index is gradually rebounding, the Fed and Treasury seem to be ignoring the dollar's weakness, and the prospect of a flood of liquidity will re-weigh on the greenback.

Last week was a wild ride for U.S. stocks. U.S. stocks continued to hit new highs as most companies reported better-than-expected earnings and Joe Biden said the government would increase supplies of COVID-19 vaccines. Subsequently, the US stock market staged a dramatic scene -- the short squeeze by retail investors became the focus. Three major U.S. stock indices plunged, with the S&P 500 and the Dow both posting their biggest declines in three months, as the movement of retail traders against hedge funds fueled panic and forced hedge funds to reduce their stock holdings to raise cash.

In addition, the Fed's warning that the pace of economic recovery is slowing also contributed to the sharp decline in U.S. stocks. On the economic front, U.S. GDP grew at a 4% annual rate in the fourth quarter, below market expectations of 4.3%. For all of 2020, GDP fell by 3.5%, making it the worst performance since at least the end of World War II. Still, there was some good news about the U.S. job market last week. New claims for state unemployment benefits drop to 847,000 last week, below market expectations of 875,000. At the same time, strong earnings from a number of companies sent risk-on sentiment higher, helping U.S. stocks rebound from losses. But the movement of retail traders remained frenetic, fueling jitters that eventually sent the market back into bearish mode. At last week's close, the S&P 500, Nasdaq and Dow were at 3787.38, 13337.16 and 30603.36, respectively, down 1.70%, 1.43% and 1.84% for the week. See S&P 500 Index Chart below:

This week, the U.S. non-farm payrolls will be released, and it will be interesting to see if there will be a slight improvement this time since the previous reading has disappointed the market.

Risk sentiment was subdued and the Aussie was choppy

AUD/USD recovered after falling early last week on the back of higher risk asset prices. However, the currency pair fell as low as 0.7592 as deteriorating market sentiment and a spike in VIX prompted a flight to safe haven currencies. The subsequent weaker than expected U.S. GDP data weakened the U.S. dollar and provided the impetus for the Aussie rally. At the end of the week, AUD/USD was 0.76409, down 0.89% for the week.

Additionally, Australia's CPI rose by 0.9% last week, above market expectations for a 0.7% gain, adding to evidence of the strength of the country's economic recovery. But CPI remained well below the RBA's target range from 2% to 3%. On top of that, China said last week it would impose zero tariffs on some wood and paper products from New Zealand, which is Australia's main competitor in Chinese market. This week, the RBA's monetary and interest rate decision will be released. According to Reuters, it is likely to keep the cash rate at a record low of 0.1% and announce an extension of its A$100 billion ($73.93 billion) quantitative easing programme set to expire in April, which should be a focus for Australian dollar investors. Trade Now>>