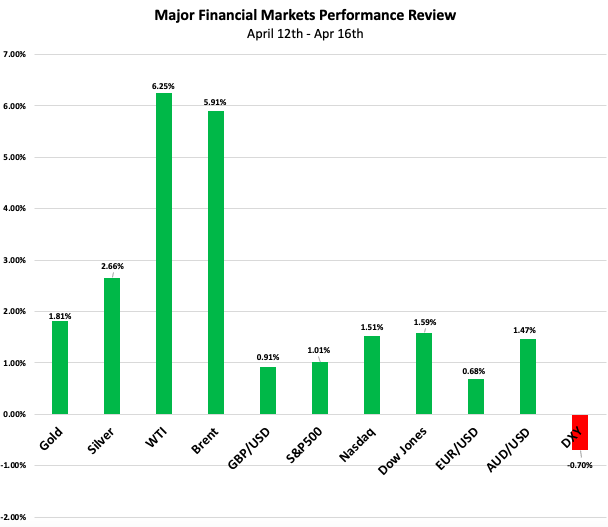 The lifting of lockdown restrictions and the release of better economic data last week helped the pound bounce back strongly from the gloom that had been dragging it down. On the one hand, the UK has revealed that trade between the EU and the UK rose 0.4% in February from a year earlier, suggesting a partial recovery in post-Brexit trade, despite the country's economic lockdown. On the other hand, scenes of people lining up outside discretionary shops and outdoor attractions that were allowed to reopen last Monday reflected pent-up consumer demand. And British Prime Minister Boris Johnson has said he wants to relax most coronavirus restrictions by the end of June. On the back of these factors, the market became more optimistic about the UK economic recovery, pushing GBP/USD briefly above 1.38 from a multi-week low of 1.367. At the close of the week, sterling traded at 1.3831 against the dollar, up 0.91%. See GBP/USD Live Chart below:

Despite the strong gains, the significant advantages that have underpinned sterling's strength may be eclipsed as vaccination continues to accelerate in other countries, raising questions about whether the currency can continue to rise in the future. This week, the UK unemployment rate and Consumer Price Index (CPI) for March will be released, after February's slight fall for the first time since the COVID-19 outbreak and its drop from 0.7% to 0.4% against the backdrop of stronger global inflation expectations, respectively. It will be interesting to see if the data continue to improve.

Last week, US Crude and Brent Crude prices climbed on the back of higher demand expectations from major energy agencies and a big drawdown in US crude inventories. OPEC and the International Energy Agency (IEA) raised their 2021 demand forecasts by 190,000 b/d and 230,000 b/d, respectively, giving a boost to prices that had been weak recently due to the third wave of pandamic in Europe. US crude and Brent prices surged as much as 4% after API and EIA data reported declines of 3.608 million barrels and 5.889 million barrels, respectively, much better than expected. The two financial instruments ended the week at $63.07 / BBL and $66.7 / BBL, respectively, up 6.25% and 5.91%. See WTI Crude Price Chart below:

Also, oil prices have recently been supported by geopolitical tensions between Russia and Ukraine as well as the Middle East. But the IEA's outlook for future supply and demand kept prices under pressure. Going forward, oil prices could be pressured by the agency's view that global oil supplies will increase in coming months and the market will shift from undersupply to balance. As a result, despite the strong rebound, the upside for oil prices is limited by the gradual increase in oil supply and the ongoing economic restrictions in some regions.

Gold rallied strongly, while the dollar fell in succession

At the start of the week, demand for three - and 10-year US Treasury notes was slightly lower than previous auctions, pushing yields sharply higher and sending gold off its high of 1750. But US CPI data came in higher than market expectations and gold prices then rose above 1960 to their highest level in nearly six weeks as US bond yields fell sharply. At last week's close, gold was trading at $1,775.85 an ounce, up 1.81% for the week.

Separately, the US Dollar Index fell unabated last week. It was sent down to near 91.5, its lowest level in nearly a month, by the strong recovery in the US economy that has weakened demand for the safe-haven dollar, and a pullback in US bond yields. At last week's close, the US Dollar Index dropped by 0.7% to 91.537. Furthermore, the dollar is losing momentum since the Fed did not consider QE program tightening in the near term, and the rebound is dependent on a break around 91.3.

Last week, U.S. stocks headed for new highs. Fed Chair Jerome Powell set the stage for the rally when he said in a CBS interview that the US economy is at an inflection point and that the recovery and job creation will accelerate in the coming months. Adding to the optimism, last week's first-quarter earnings reports from big US banks came in well above expectations. On top of that, US retail sales rose 9.8% in March, beating market expectations for a 5.8% increase and the highest level in 10 months, thanks to fiscal stimulus, accelerated vaccinations and easing of business restrictions. And the number of Americans filing new claims for jobless benefits dropped to 576,000 last week, the lowest since the COVID-19 began. On the back of these positive factors, the S&P 500 and Dow Jones continued to record new highs, while the Nasdaq briefly touched its highest level in nearly two months. As of last week's close, the S&P 500, Nasdaq and Dow Jones were up 1.01%, 1.51% and 1.59% for the week at 4,170.42, 14,038.76 and 34,035.99. See Nasdaq100 Live Chart below:

However, the beginning of the earnings season is likely to refocus the market's attention on fundamentals, while a strong recovery and growing vaccination coverage have fueled the upward momentum. Last week's US CPI data showed a 2.6% rise in March, the highest since August 2018, suggesting that inflation driven by a stronger economy is also accelerating. Therefore, the high levels of volatility are attracting attention.

Last week, EUR/USD extended its previous upward trend, but was held back near 1.2. A EU report showed the  ZEW Indicator of Economic Sentiment for the Euro Area fell to 66.3, below market expectations, from 74 last month, as the third wave of pandemic weighed on future economic and market sentiment. The disappointing report, however, did not put pressure on the euro, which was boosted by a fall in the dollar, with the single currency briefly heading for resistance at 1.2 before failing to break through. Finally, the currency pair ended the week at 1.19823, up 0.68 percent.

Going forward, if EUR/USD stays below 1.2 for an extended period of time, then the risk of a pullback will increase. Separately, ECB will announce its interest rate decisions this week. According to Bloomberg, many economists think the ECB will start to slow the pace of its bond purchases in July and may stop by March next year. The ECB's president, Christine Lagarde, has previously stressed the dangers of withdrawing monetary or fiscal support too early, but many of her fellow officials worry that pumping too much money into the financial system could undermine financial stability. All in all, the signal released by the ECB is worthy of attention.