Australian economy faces unprecedented setbacks. Where will the AUD go from here? 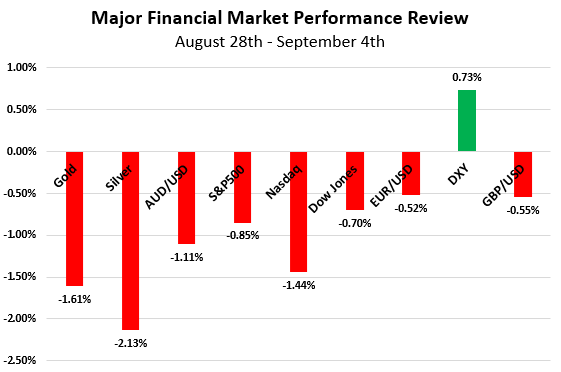 Last week's non-farm payrolls data were positive as expected and captured the attention of global markets. America added 1.37 million jobs in August, and the unemployment rate fell to a single-digit 8.4% for the first time since the COVID-19 pandemic broke out. But the positive data did little to save the U.S. stock market, which had plunged on the eve of the non-farm data release. All three major U.S. stock indices, especially the NASDAQ, slumped after the release continuously. By the end of last week, the NASDAQ closed at 11458.1, the S&P 500 at 3455.06 and the Dow at 28292.73, down 1.44%, 0.85%and 0.7%, respectively.

In addition, the long-stalled U.S. stimulus package finally took a new turn last week. The U.S. Treasury Secretary Steven Mnuchin says a bipartisan deal has been reached on a new Coronavirus relief package and school funding. In an interview last week, the Fed chairman reiterated the importance of low long-term interest rates and said the non-farm data would be a main gauge in the long run. The greenback fell below 92 early last week following dovish comments from the Fed's vice chairman. Then came the PMI readings on U.S. manufacturing and services, at 56.0% and 56.9% in August respectively, both beating expectations and better than the previous month. This helped push the dollar higher. The subsequent release of non-farm data accelerated the U.S. Dollar Index's rally back above 93, but this momentum could not be sustained, and it fell below 93 again. Even so, the dollar was the best performing currency of last week. It achieved four consecutive gains and closed at 92.974 by the end of the week, up 0.73%.

This week's performance will determine whether the dollar will break its five-month slump. Initial jobless claims fell to 881,000 last week, but some believe a different methodology has led to such a big improvement, while the real number is still more than 1 million. As a result, U.S. jobless claims will remain the focus of the market next week.

With Australia's economy reeling, the Australian dollar remains in doubt

Last week, the RBA's monetary policy and interest rate decisions came as expected. It kept its interest rates and three-year yields at 0.25% and said it would consider further monetary measures to support the economic recovery. In addition, the RBA will expand its lending facilities to banks, enabling Australia’s banks to borrow additional money at lower interest rate. Some economists said this could signal further easing is on the way. The Australian dollar briefly topped 0.74 against the U.S. dollar two days earlier last week, but the Australian GDP report sent it sharply into reverse. Australia's GDP fell by 7% in the second quarter, making it the worst recession in 29 years. The Australian dollar briefly fell below 0.73 against the U.S. dollar after the figure was released. Meanwhile, last week Australia reported a small but slightly weaker than expected increase in the monthly retail sales rate. Finally, the currency was down 1.11% on the week, closing at 0.7284.  See AUD/USD real-time chart below:

Australia's trade balance data showed a windfall for the country as a strong recovery in the Chinese economy pushed commodity prices higher, despite deteriorating relations with China. High demand for the precious metal has led to a surge in Australian gold exports. Whether China will implement more stringent tariff policies or trade sanctions against Australia will be a key factor for the Australian dollar this week. The currency, as a barometer of risk appetite, is at risk due to the current sharp rise in the panic index. And the U.S. dollar has been gripped by bearish sentiment, so this could provide an upside opportunity for the Aussie.

Europe's economic recovery is weakening, and the euro is heading for a bumpy ride

Last week, the EU released the unemployment rate and retail sales data that suggest the recovery is weakening. Unemployment in the Eurozone edged up to 7.9% in July, up from 7.2% in March and the highest level on record, according to EU unemployment data. European retail sales figures were equally gloomy, falling short of expectations and sharply lower than in June. The ECB expressed concern about the rising euro and said it might respond with monetary policy to it. The euro plummeted against the dollar after the comments, falling below $1.18 from a nearly two-year high of $1.2 and continuing its slide until the end of last week. As of last week, it dropped by 0.52% to 1.18389 against the dollar.

ECB chief economist Philip Lane warned last week that complacency could exacerbate low inflation and lower expectations for price growth, making it more difficult for the ECB to meet its targets, and some economists took his comments as a hint that the central bank was ready to expand its stimulus program further. Next week's announcement of EU GDP, interest rates and fiscal and monetary policy is therefore of particular importance and worth watching.

Gold and silver have had their ups and downs in the past week, leaving investors on edge. Comments by the central bank’s Vice Chairman Larry Clarida that the Fed is committed to not raising interest rates just because the unemployment rate is falling helped push gold above $1,990 an ounce, but then a slew of positive U.S. economic data sent gold and silver prices lower. What's more, Thursday's plunge in U.S. stocks sent VIX up 26%, but that didn't lift the prices of gold and silver. Instead, they suffered heavy selling. As a result, gold prices closed down to $1,922 an ounce, and silver fell from $28.9 an ounce to around $26. On Friday, the yellow-colored metal fell sharply after the non-farm data was released, briefly dropping below the $1,920 mark to as low as near $1916. By the end of last week, gold and silver were down 1.61% and 2.13%, respectively, at $1,932.8 and $26.896 an ounce.

For the future trend of gold and silver, more central banks are likely to follow the Fed's lead and adopt quantitative easing since the last Jackson Hole symposium, so this may be good news for them. Besides, the decline in U.S. Treasury yields will encourage safe-haven investors to increase their holdings of gold. All in all, gold and silver should remain supported over the long term as the global economy recovers slowly, while short-term volatility could drive some speculators out of the market.

What will the GBP respond to the economic recession?

Sterling hit a near eight-month high of 1.34 to the dollar last week but has since been pushed lower by dovish comments from the Bank of England's deputy governor that the UK economy could suffer more than expected and could step up the pace of quantitative easing significantly if needed. Bank of England policymaker Michael Saunders added that the British economy was in such a deep recession that QE was necessary and there was headroom to do materially more QE. By the end of last week, the pound tumbled by 0.55% against the dollar to $1.3176.

Additionally, British inflation was likely to turn negative in the future and consumption had bounced back faster but investment remained weak, according to Bank of England Governor Andrew Bailey. A survey by Reuters signals a rapid rise in unemployment in August as a result of the pandemic. This is bound to add to the woes of the British economy and the Brexit negotiations have brought great uncertainty to it. Last week, the EU's chief Brexit negotiator issued its sternest warning yet, accusing Britain of failing to engage constructively in negotiations over the future of their relationship. Meanwhile, a recent report by JPMorgan suggests a chance of over 30% that the UK and the EU will conclude a trade agreement. Thus, sterling's trend will continue to be dominated by the UK's economic recovery and the progress of Brexit negotiations.

Last One With recent unfavorable news,is gold and silver deep in trouble?
Next One Brexit on the edge, GBP suffers from downward pressure!
Latest Release
Popular Reading