Oil prices rise strongly, but investors need to be wary of a pullback

Abstract: As the global economic outlook is expected to gradually improve, investors hold a positive attitude for the recovery of the oil market. OPEC+ 's emphasis on the "rebalancing of supply and demand" and several weeks of sharp declines in U.S. crude inventories contributed to higher oil prices. However, with the emergence of short-term risks in the oil market, will the price of crude oil face a correction?

Crude has been one of the brightest trends of late, with U.S. crude and Brent crude rising for several days after trading in tight ranges for more than a week. U.S. crude traded at $58 a barrel, while Brent crude broke through $60 a barrel, both rising in a parabolic fashion to their highest levels in almost a year. Crude remained strong, and the market was increasingly bullish on oil prices. U.S. crude and Brent crude were thus pushed higher due to the OPEC+ JMMC's repeated emphasis on "balance between supply and demand" and strict compliance with the production cut agreement, as well as the sharp decline in U.S. crude oil inventories recorded in recent weeks, at such a time when global crude oil supply showed a significant downward trend. However, short-term risks could lead to increased volatility in oil prices that are already high. So, what are the other factors for the current oil market? Will oil prices continue to rise?

Last month, the International Monetary Fund (IMF) said in its World Economic Outlook that it expected the world economy to grow 5.5% this year, up 0.3 percentage points from its October forecast. Global GDP was projected to grow by 4.2% by 2022, as shown below: 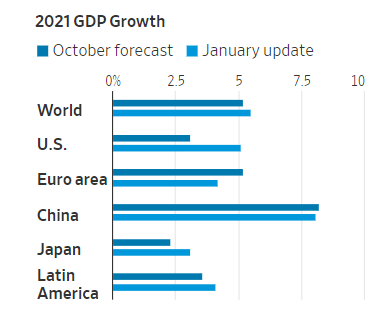 In addition, multiple central banks have maintained their previous large-scale quantitative easing to further support the global economic recovery. Meanwhile, Joe Biden's efforts to push through a $1.9 trillion economic rescue plan since taking office have fueled a surge in risk sentiment and the prices of risk assets. Take the U.S. stock market, for example. Since February, 2021, the three U.S. stock indexes have set new records, which has been one of the factors supporting the high price of crude oil. Investors are also more optimistic about the oil market's ability to shake off the global economic blockade and about future oil demand, as the pace of vaccination in the U.S. and Europe picks up and regional progress against the COVID-19 has been made.

Despite government restrictions on travel during the Chinese New Year, China, the world's largest crude importer, has again flooded the oil market to buy so much crude that the number of ships at its ports jumped to 127, the highest level in nearly six months, according to Bloomberg. It has previously bought large quantities of crude oil at very low prices to support domestic demand when crude prices fell to freezing. However, the rise in crude prices and a buying frenzy in the spot market have once again pushed the oil market into backwardation, where nearby contracts are higher than forward ones, indicating tight supplies.

U.S. API and EIA crude inventories have recorded significant declines since the end of December, as shown below: 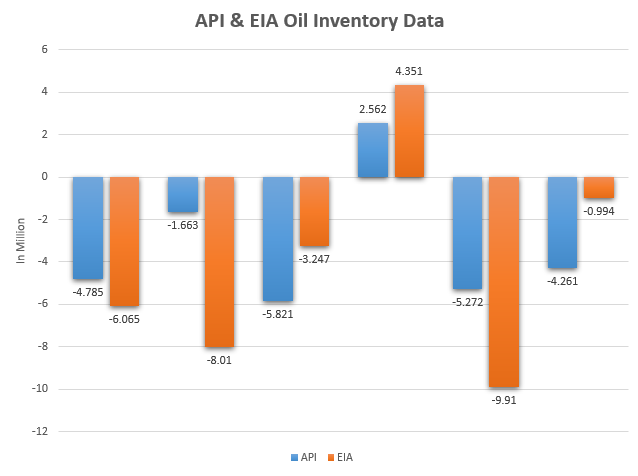 On the OPEC+ side, it was decided at last year's OPEC+ meeting that a small increase of 500,000 b/d would take place in January this year, and Saudi Arabia volunteered to cut output by another 1m b/d. The high implementation rate showed OPEC+ 's determination to restore oil prices. In addition, OPEC's overall compliance rate has reached an unprecedented 99% since the cut went into effect last May. This is also helping to support oil prices.

What are the short-term risks to the oil market?

1. Although OPEC+ cuts have been implemented by 99%, the reductions by its Allies have not been the same. Since May, 2020, more than half of OPEC members have, on average, excess capacity. Saudi Arabia has cut the most, while Russia is the biggest surplus producer. Such an uneven cut put the OPEC+ meeting next month in the spotlight, with oil market once again likely to be affected by tensions among OPEC+ members.

2. Despite the strong rise in crude oil prices, near-term demand remains under pressure. With inadequate supplies of the vaccine and the high rate at which it mutates, it seems likely to take longer to achieve universal immunization. The sharp rise in the price of crude oil seems to be an optimistic outlook on the future oil market and a temporary decision to tighten supply. As a result, volatility in the oil market may be on the way as high prices diverge from immediate market factors.

Crude oil prices are technically positive amid renewed confidence in the global economic recovery and a stream of good fundamental news for oil markets. Since 2021, there have been two rallies in U.S. crude. The first was a four-day rally supported by the 47.08 level on January 4. Then, U.S. crude went into the second multi-day rally after a narrow range for nearly a week, as shown below: 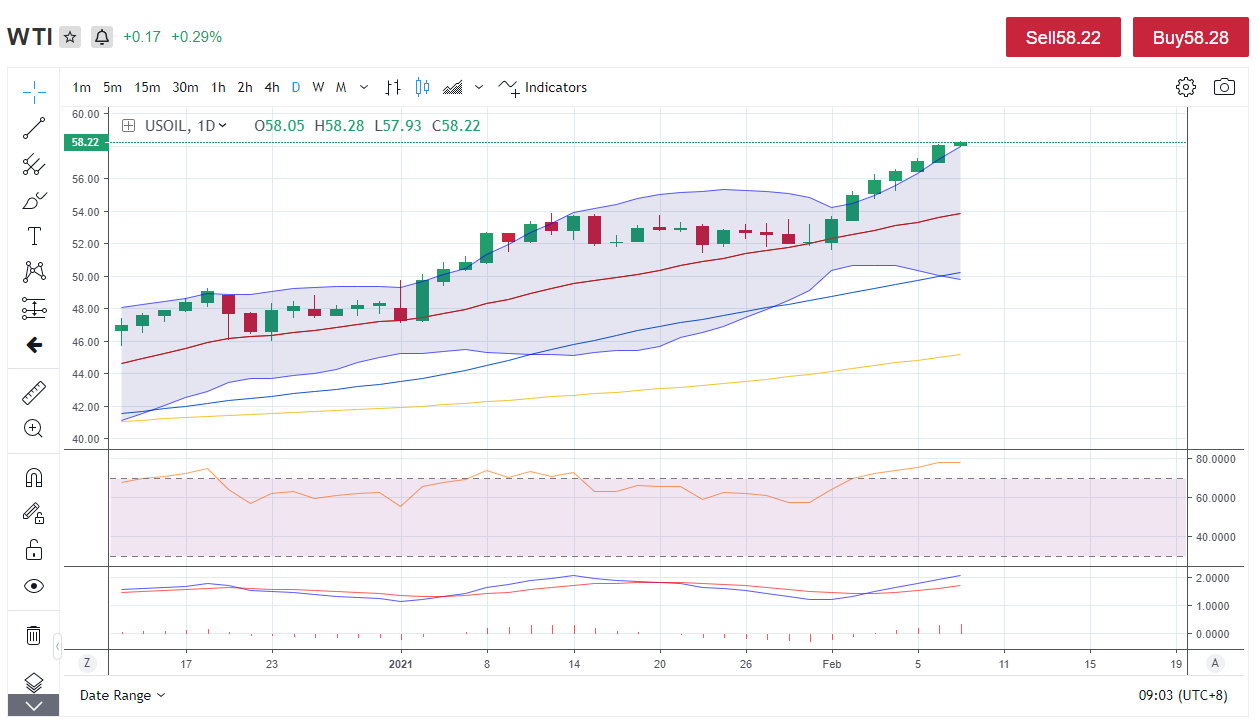 On the Bollinger Bands, U.S. crude price broke through the upper bands since February 2, indicating a strong momentum. But it is worth noting that crude oil has been overbought several times in the past two months due to the increasing activity of the oil bulls. The relative strength index (RSI) is now above 78 and U.S. crude is again overbought. This may indicate: 1. Crude oil is strongly bullish, and the heat in the oil market is unabated. 2. Overbought position may presage some profit-taking for bulls, followed by a pullback.

In summary, while global economic data has been improving, parts of the world remain locked down and near-term oil demand remains under pressure. Additionally, some OPEC countries' strict production cut and the imbalance in the scale of production cuts within OPEC will bring uncertain risks to the crude oil market. Therefore, crude oil recovery is in sight, but investors should be wary of a correction from high oil prices due to the short-term overbought market.

Last One Crude Oil Investing: How To Day Trade Crude Oil With CFD (2020)
Next One With commodities in high demand, will copper's bullish trend continue?
Latest Release
Popular Reading