Abstract: February's non-farm payrolls data challenges the market sentiment! With the huge increase in the number of vaccinated people and the reopening of the economy, the improvement in the employment of the United States has come to the market's attention. U.S. economic aid was set to expire, so Biden's $1.9 trillion stimulus package was in the works. With positive future expectations, It is worth paying attention to what impact the non-farm payrolls data will have on gold and U.S. stocks.

U.S. nonfarm payrolls rose by just 49,000 last month, below market expectations, but thanks to a sharp drop in the labour force participation rate, the unemployment rate fell from 6.7% to 6.3%, as shown below: 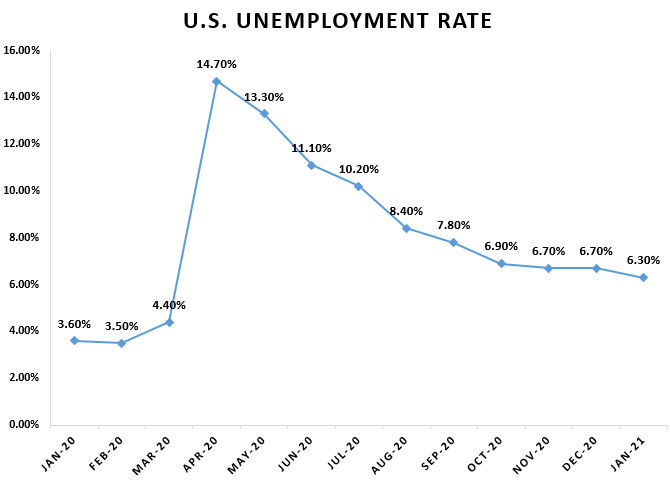 In terms of employment, the hospitality industry continues to be one of the hardest hit by state government measures to shut down hotels, bars and restaurants or restrict congregations to prevent further spread of the COVID-19. The retail sector also lost nearly 38,000 jobs last month, after posting a big gain in December, 2020 due to the holiday shopping season, as shown below: 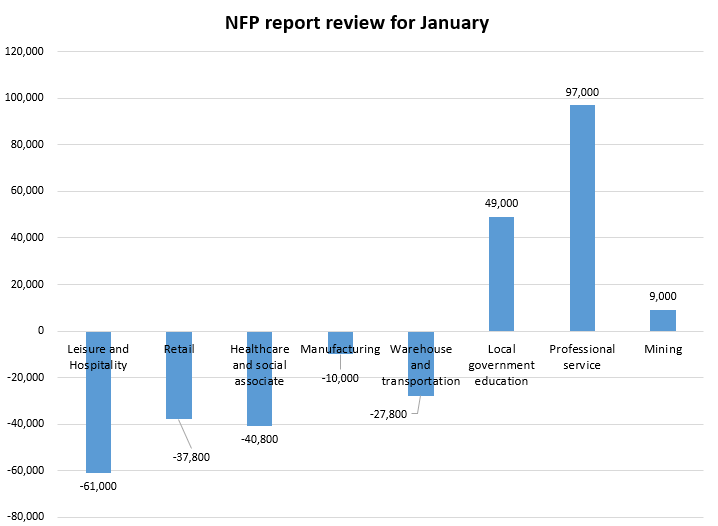 While January's non-farm payrolls data is an improvement from those in December, 2020, they  still were nearly 9.9 million fewer jobs than what they were before the outbreak. This shows that the U.S. labor market is still facing huge challenges. Then, will the acceleration of vaccination and the gradual improvement of the economy lead to a significant improvement in employment in February?

Vaccination offers hope for a full economic and job recovery

As of March 1, about 25.47 million people in the United States, or 7.7% of the population, had received two doses of COVID-19 vaccine. More than 50 million people, or 15.3%, have received one dose of vaccine. Although the U.S. government only provides vaccines for people over 65 and front-line workers, Joe Biden's goal of delivering 100 million doses within 100 days, set after taking office, is being met at an accelerating pace.

So far, the federal government has delivered 96.4 million doses of vaccine to state governments, according to the New York Times. With vaccine production capacity on the rise, Joe Biden recently said the United States will have enough COVID-19 vaccine for all American adults by the end of May, two months earlier than previously expected. If the current rate of vaccination continues, nearly all Americans will be vaccinated by early in the second half of the year. Not only that, but last week the FDA has given the greenlight to Johnson & Johnson's single-shot COVID-19 vaccine, making it the third vaccine available in the United States. Needless to say, the government's vaccination efforts have renewed confidence in the control of the pandemic, and suggest that the U.S. may see a gradual increase in employment in the future.

New claims for jobless benefits edged down from more than 800,000 to near 700,000 in February, the lowest level since November, suggesting the job market is returning to growth, as shown below: 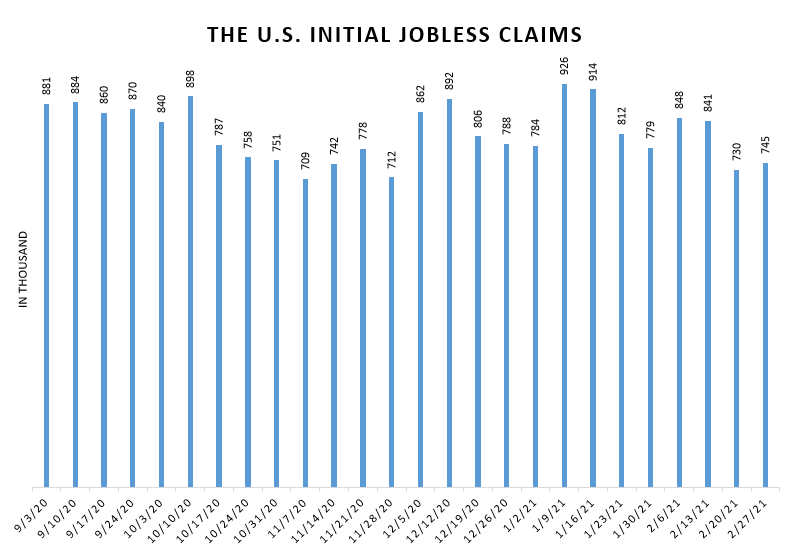 Still, extreme snowstorms in the south-central U.S. in February, which caused temporary job losses due to power outages in some areas, could affect claims in the short term. However, the number of job openings at the end of January was higher than it was at the same time last year, suggesting that a new round of stimulus measures enacted last month has added some dynamism to the job market, according to US job site Indeed. (Source from: WSJ)

The House of Representatives recently passed Joe Biden's $1.9 trillion economic stimulus package and it now heads to the Senate for a vote, where raising the minimum wage to $15 an hour has been a point of disagreement between the two parties. As the U.S. government's $900 billion stimulus package made a significant contribution to the recovery, this month's retail sales figures, for example, were up 5.3% in January from the previous month, while manufacturing output has almost returned to pre-pandemic levels. But unemployment benefits included in the stimulus package are set to expire on March 14, leaving little time for the House and Senate to debate and reach an agreement on direct cash payments to Americans and increases in jobless benefits included in the new package.

What impact will the non-farm payrolls data have on financial markets?

1. Gold market. The gold market was in crisis after a sharp rise in U.S. Treasury yields. And the recent retreat in Treasury yields has not stopped the downward trend in gold prices, suggesting that the bears have not retreated and the bulls have been subdued. Indeed, gold investors' reaction to the gradual improvement in the global economy and the surge in Treasury yields has far outweighed expectations of increased demand for safe-haven assets due to pressures on inflation. With the economy recovery and decreasing jobless claims, the non-farm payrolls data may improve a little, so gold may remain weak.

2. The U.S. stock market. The market's focus shifted from concerns about rising bond yields to optimism about Joe Biden's massive stimulus bill, helping U.S. stocks rebound from earlier losses. It's worth noting that although the U.S. stock market is strong, the fear of inflation persists, which undoubtedly makes the U.S. stock market more volatile. The release of the non-farm payrolls data may have some short-term impact on the U.S. stock market, but its medium - to long-term performance depends on whether investors are optimistic enough about the U.S. employment outlook.