Gold price analysis: Gold fluctuates violently as COVID vaccine is on the way！

Abstract: Financial markets have been jittery recently. As the U.S. election campaign draws to a close, there has been another burst of big news in vaccine research and development. At this juncture, the gold market may face more drastic fluctuations. The question is, will the imminent arrival of a vaccine really force the bulls to say goodbye to gold? Let's find out.

The recent market focus has shifted rapidly from the U.S. election to the COVID-19 vaccine. Pfizer said trials of its COVID-19 vaccine, developed in collaboration with BioNTech, a German biotech company, suggest the shots may be 90% effective at preventing COVID-19. As expected, global risk assets soared after the news, with the S&P 500 and the Dow breaking record highs, while technology stocks, which have benefited from the COVID-19 pandemic, fell short, leading the NASDAQ to retreat. At the same time, the safe-haven gold was sold off as risk assets skyrocketed, and pieces of positive news on the vaccine are sure to make it more volatile. Therefore, gold bulls are starting to worry that the bull market has run its course.

Is the vaccine really coming?

The fact that the vaccine may be 90% effective was surely the most fundamental reason for the rally in risky assets and the plunge in gold, enough to convince the market that this is the key to a return to normal life. Anthony Fauci, the director of the National Institute of Allergy and Infectious Disease, said the figure could have significant implications for COVID-19 vaccine development. And what does 90% really mean? If true, that would mean nine out of 10 COVID-19 cases could be immunized with the vaccine. In fact, however, Pfizer's future data on vaccine development should be of more concern, because 90% is just what Pfizer found in its initial results on November 8, the day of the trial, and does not consider testing for severe cases. But generally, to get a vaccine approved, tests on a wide population are required, and besides, several rare side effects often occur two to three months after vaccination. Even if Pfizer pulls through to get its vaccine approved, many issues remain to be resolved in terms of storage technology and production. A vaccine, for example, can survive only at extremely low temperatures, making it exceedingly demanding to transport. So Pfizer's data - 90% effective - is cause for celebration, but vaccination is still a long way off. And the market sentiment in now entanglement of two extremes -- emotional and rational, intensifying the volatility in the gold market.

The number of new infections worldwide is rising faster than vaccines can be developed!

The United States has reported the world's largest numbers of new infections in individual days. As of this month, the total has reached nearly 10 million, and will increase further after the U.S. election due to both celebrations and protests. Except for the United States, the pandemic prevention and control in Europe is not optimistic, either, but Europe has begun to impose a strict economic blockade. Governments are being forced by the growing number of new infections, despite the positive news on vaccine development, to restrict people's economic activities in the short term, and vaccine production could be weighed on in the future as cases rise. Moreover, central banks will not change their plans to pump liquidity into the markets as the pace of economic recovery slows again. As a result, gold, mired in volatility, is likely to get some upside support.

Is a stimulus package closer after the election?

Despite Trump's refusal to accept Biden's victory and take the validity of the vote to court, it may still be difficult to reverse the result that Biden would be the 46th President. The news was not only reported by major U.S. media outlets, but also officially announced by Trump's media ally Fox News on its website. Biden's victory may have a positive impact on the trend of gold. On the one hand, the Democratic Party has been pushing for a bigger bailout package, the dollar could fall and gold could see a rally as liquidity increases. On the other hand, Mr Biden's long-advocated corporate tax could add to the jitters on Wall Street and give gold an upside. But until then, the gold market will remain volatile. See live XAUUSD chart below:

What will move the trend of gold in the future?

1. In the short term, gold's performance depends on whether vaccine makers continue to report positive data, and if that happens, there's no doubt the gold market will be in volatility again. In the long run, gold will be constrained by the availability, capacity, storage and transport of the vaccine.

2. Biden is likely to adopt a relatively stable foreign political and economic policy after taking office, and this may not be good for the gold trend since geopolitical tensions and trade frictions are one of the major drivers of gold's rise.

3. If vaccine development works as expected, central banks will slow down their quantitative easing, so the dollar may rise and the downside risk to gold will increase.

To be sure, the gold market was plunged into a frenzy of panic after Pfizer's vaccine news. As a result, gold fell by more than 4.5% on November 9 from a high of $1,965.36 to $1,850.39 an ounce, giving up all the gains it had made during the previous election week. Fortunately, it rebounded at $1,850, indicating that the key support level at the late September low of $1,849.2 had not been breached, as shown below: 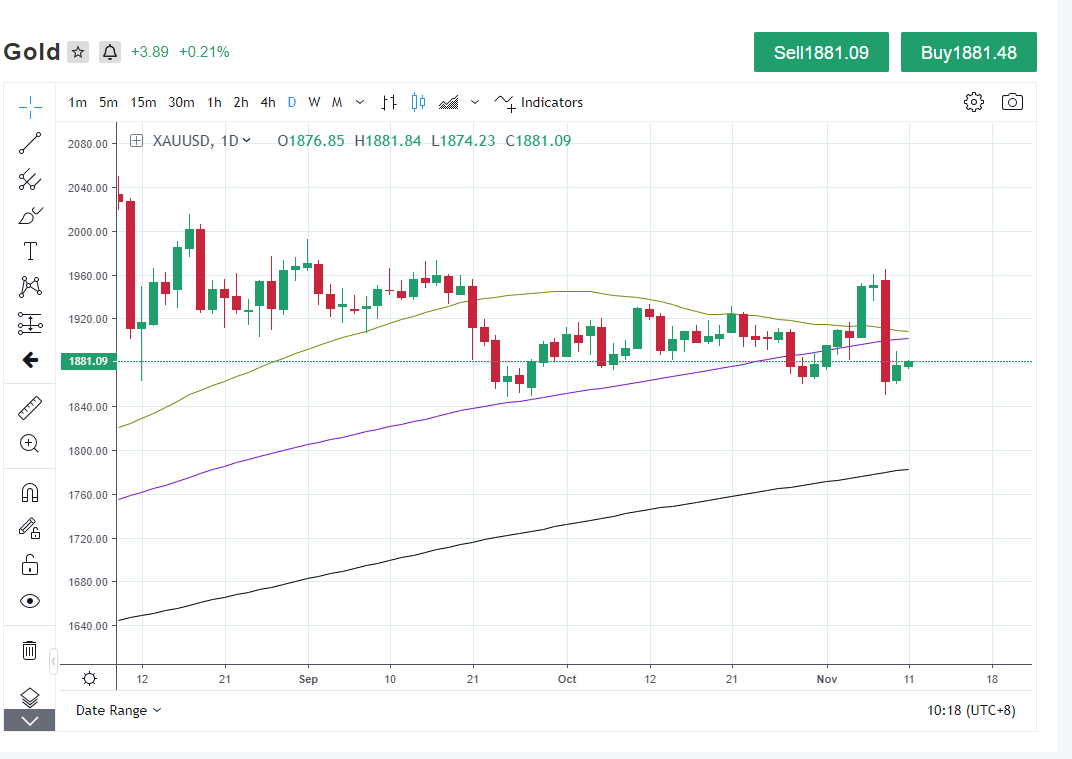 A pullback in gold at its key support level could mean that investors calmed after the positive vaccine news and may not have stopped them from remaining bullish. The support level investors really need to watch for, however, is the 200-day moving average around $1,783, which if breached would further depress bullish sentiment and more downside might open up.

All in all, despite the breakthrough in vaccine development, it is conservatively estimated that if the development goes well, it will take at least three to six months for the vaccine to keep flowing in the market. Furthermore, the increasing number of new infections and the re-blockade of the economies have forced central banks to continue their current policies of quantitative easing. But it is worth noting that wild swings in the gold market may increase as the disclosure of good news from medical companies that use the same approach as Pfizer to develop a COVID-19 vaccine could once again lead to fierce competition between bulls and bears. Therefore, investors who have trading opportunities in volatile markets should always be alert to such scenario changes.

Last One How To Trade Gold CFDs in 2020? Gold Trading With CFD
Next One NFP is coming! Will Gold stage a big reversal？"
Latest Release
Popular Reading