Interest in Bitcoin Spikes During COVID-19 - Is BTC Still a Good Investment?

Some analysts believe that Bitcoin investing is an important asset for an investment portfolio and that it can provide security during economic recessions. The COVID-19 incident has brought on the worst recession in recent history and the first for Bitcoin, leaving many analysts wondering: Is Bitcoin a good investment during difficult economic times?

Bitcoin is a decentralized digital currency that operates without a central banking authority, allowing users to send coins to each other on a peer-to-peer network without the need for intermediaries.

Investment in BTC is conducted through authorized exchanges through transfers from traditional banks, allowing users to use the digital currency as a store of value.

Interest in Bitcoin has spiked tremendously in recent years. Since its start as a relatively obscure digital currency in 2008, it peaked in 2017 at over $19,000 per coin, prompting some analysts to question its inherent value in an investment portfolio.

Interest has increased even more with the recent COVID-19 issue that crashed stock markets and resulted in lockdowns causing massive unemployment. The price of Bitcoin fluctuated a great deal during this time prompting some analysts to question its value as a “safe haven investment”.

Investments are referred to as “safe havens” when they are expected to either retain their value or increase in value during times of economic turbulence. They are desired by investors that wish to limit their risk and avoid losses when markets take a dive, however they are not all equal.

Some safe haven investments perform well during market downturns while others maintain their price or increase. For that reason, research is required by all investors prior to purchasing these assets in order to evaluate the risks involved.

In other words, the best safe haven investments go up in value when the rest of the market goes down. This demonstrates an increase in investor interest in the asset during recessions and depressions.

The most popular safe haven investments include some precious metals, U.S. Treasury Bills, and “blue chip” or “defensive” stocks (like utilities). It is useful to evaluate how other safe haven assets behave in order to see if Bitcoin can operate in a similar fashion during times of economic distress.

Gold has been considered a store of value for thousands of years and cannot be printed like money. It is also desired because its value is not impacted by interest decisions made by central banks.

Bitcoin, on the other hand, is a relatively new form of currency and has no physical value, therefore there is not much of a comparison because these assets are inherently different.

Treasury bills are debt securities backed by the United States government that are ultimately secured by the taxes collected from U.S. citizens. They are considered to be risk-free because the principal invested by the holder is paid back by the government when the bill reaches maturity. They are very popular with investors during times of economic turmoil due to their security.

Investing in BTC is very different because it is not backed by any government or central banking authority. Its value is purely arbitrary and based upon its perceived value. If its value drops to zero there is no centralized authority backing it that can offer security to investors.

Defensive stocks are very popular with risk-averse investors and can include shares of companies in utilities, healthcare, biotechnology, banking and consumer goods. Investors are drawn to these stocks because of the perceived idea that consumers will always require electricity and water in addition to buying items like food, health products, and housing supplies no matter how the economy is performing.

Defensive stocks are backed by company assets and rely on company performance. Bitcoin, on the other hand, is not attached to any company and has no inherent value other than its perceived market value.

Many analysts and fans of Bitcoin favour its use due to centralized banking practices, believing that Bitcoin is a safe investment when the U.S. Federal Reserve prints U.S. dollars in excess. Many analysts believe this to be the current case because the U.S. federal reserve (along with many other central banks in the world) are printing money to combat the economic fallout from institutionalized lockdowns.

Despite this idea, the U.S. dollar has actually risen in value during this time, invalidating the theory that Bitcoin investing somehow protects investors against the falling value of the U.S. Dollar.

If a safe haven investment can be described as one that (a) has inherent value (like gold), (b) is guaranteed by a governing body (like U.S. Treasury Bills) and/or (c) is backed up by company assets and inelastic demand (like defensive stocks), then it can be confidently concluded that Bitcoin is not a safe haven investment.

When compared to other safe-haven investments during the COVID-19 issue, market data has shown that it did not move in a similar fashion to other investments.

Items like high-quality bonds and gold have risen when compared to investing in BTC however when compared generally to stocks it outperformed by a substantial margin. It should be noted, however, that this comparison was performed with all stocks (rather than just defensive stocks) and that the general market for shares is far larger than Bitcoin, making the comparison somewhat unequal.

Given the analysis provided above, it can be said with some degree of confidence that BTC does not behave as a safe-haven asset and that there are better investments available for hedging against portfolio losses in times of economic downturn.

How BTC Performed During COVID-19

Despite its failure to increase in value, interest in Bitcoin grew immensely during COVID-19, with demand growing in certain countries.

According to some sources, Bitcoin peer-to-peer trading volume peaked to record levels in Chile, Argentina, Morocco and Venezuela with additional reports suggesting that some cryptocurrency exchanges experienced peaks in traffic in the past few weeks.

This evidence suggests that more people are trading cryptocurrency in general (not just Bitcoin) and reports of increased hiring on major exchanges like Kraken and Coinbase confirm increased investor interest.

Like most investments, the price of Bitcoin crashed in March only to bounce back to levels before the crash. As of this writing, the price is approaching $9,000 per coin, however it bears mentioning that its price is extremely volatile. The price of BTC swings by the hundreds in the course of a day, making it a severely unstable investment. 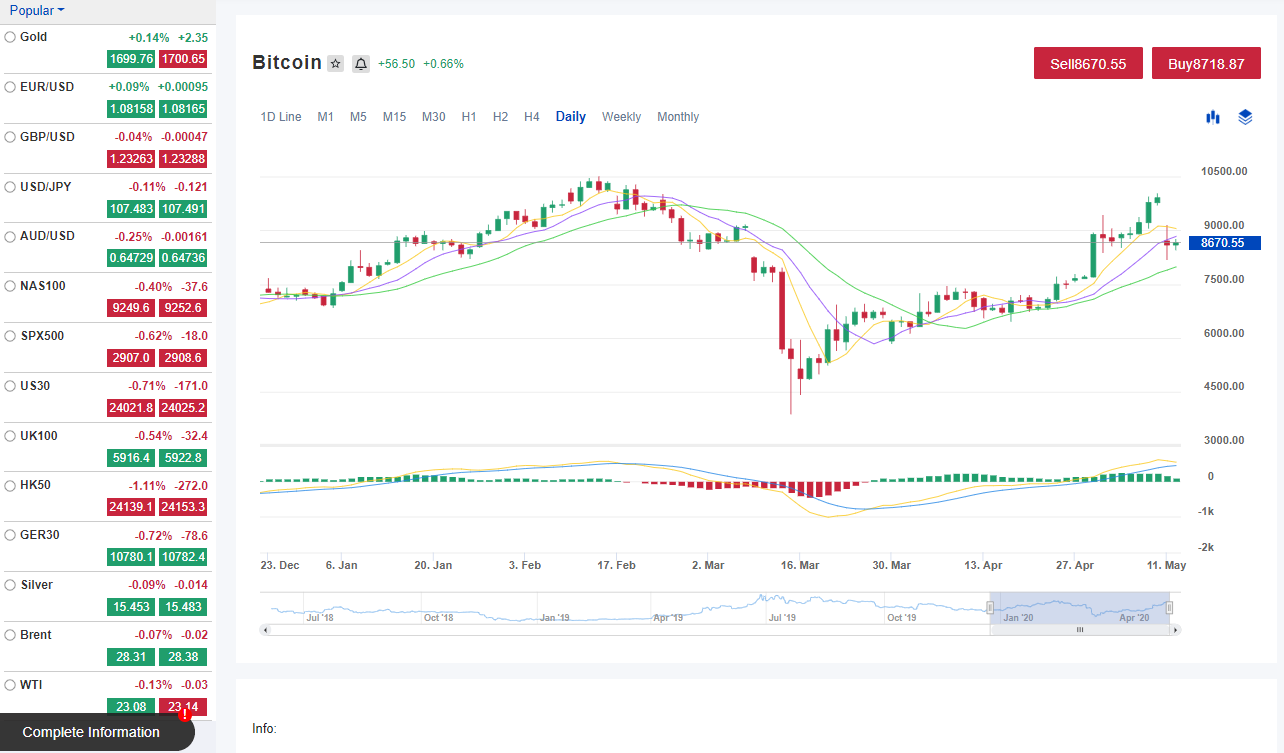 What the Experts Are Saying

Many financial experts recommend investing in BTC and the addition of other cryptocurrencies to investment portfolios, despite there not being much inherent value to these currencies when compared to safe haven investments.

A report by JP Morgan, for example, suggests that “the crypto market continues to mature, and cryptocurrency trading participation by institutional investors is now significant.” The prediction that followed concluded that bonds may underperform over the next few years and that yen and gold are part of a better strategy that might also include cryptocurrencies.

Among other analysts vouching for the purchase of Bitcoin is Virgin Galactic chairman Chamath Palihapitiya, who makes a case for the price of BTC reaching $1M per coin. It bears mentioning that Palihapitiya purchased the coin back in 2013 when the price was around $80 per coin and claims that he owned around 5% of the entire Bitcoin monetary base at some point.

How to Invest In Bitcoin

Despite the extreme volatility and fluctuations Bitcoin offers, some people choose to invest in this extremely risky investment instrument. There are several ways to do so, including:

1. Purchasing Bitcoin from an exchange

Bitcoin can be purchased easily on exchanges and paid for in a variety of ways that can include credit cards, debit cards, wire transfers, or exchanges with other cryptocurrencies.

Finding a reputable exchange is the first step, and a reliable directory can be found on the official Bitcoin website.

CFDs and futures are financial derivatives that allow an investor to trade on the value of the asset without owning the asset, allowing them to make a profit or take a loss depending on the value change of the underlying asset. Available in a wide range of investment instruments (like Bitcoin), CFDs give traders the opportunity to profit on either direction the asset price goes.

Many traders prefer CFDs rather than purchasing BTC because it allows them to speculate on price movements without owning the asset - unlike a straight BTC purchase that only profits when the value increases.

Going “short” on Bitcoin is the position taken by the trader when they believe the price will fall. The opposite position - referred to as “going long” - is taken when the trader believes that the price will increase. CFDs are sold over the counter as a contract, and the profits or losses are realized after the position is closed.

Leveraged trading gives traders the ability to conduct large trades through the use of credit provided by the broker. It allows traders to take large positions and magnify their profits when the trades provide a favourable outcome.

Accordingly, leveraged trading can magnify the losses and drain the trader’s capital, along with any credit provided by the broker.

For example, a leverage of 1:200 means that the trader can speculate up to 200 times the value of what is put down in cash. This may result in spectacular profits, however can also go the other way if the trade moves in an unfavorable position.

Bitcoin CFDs have advantages and disadvantages like all investments, including:

As mentioned above, the use of leverage can make CFDs very attractive for investors and magnify both profits and losses. It is always advised to never trade more than what can be risked to lose.

CFDs are sold over the counter through brokers and are not subject to some trading markets that prohibit shorting. Since the trader does not own the underlying asset, CFDs can be shorted at any time.

Some brokers require a minimum capital outlay to trade on their platform or even place restrictions on the number of trades an investor can make during the day. Since CFDs are sold by brokers, they are not subject to such restrictions and most brokers have no deposit requirements and allow a small amount to be traded - sometimes as low as a single share.

CFDs are best suited to experienced traders as the prices can move fast and require close monitoring. Traders that use margin need to be especially careful to maintain margin levels and avoid involuntary closing of their positions.

As mentioned above, many Bitcoin CFD traders lose money. As with all investments, it is very important to research the instrument carefully and try a demo account prior to commencing actual trading.

COVID-19 created mass financial panic throughout the world, prompting many analysts and investors to question if Bitcoin was a safe investment during times of economic crises.

Safe haven investments either keep or increase in value during economic panics, and Bitcoin did not demonstrate this behavior as the price fluctuated with a high degree of volatility. Since CFD investment allows traders to speculate on both upward and downward movements, many traders prefer this option for BTC investing.

The content presented above, whether from a third party or not, is considered as general advice only.&nbsp; This article does not contain and should not be construed as containing investment advice, investment recommendations, an offer of or solicitation for any transactions in financial instruments. Mitrade does not represent that the information provided here is accurate, current or complete. Mitrade is not a financial advisor and all services are provided on an execution only basis. Before making any investment decisions, you should seek advice from independent financial advisors to ensure you understand the risks.