Abstract: Oil prices climbed steadily since the balance between demand and supply grew optimistic. Gold suffered setback in its climb on strong economic data. RBA continued QE and the AUD fell. Inflation rose fast and EUR/USD fell from its highs. Non-farm payrolls data came in below expectations, but the U.S. stocks react calmly. 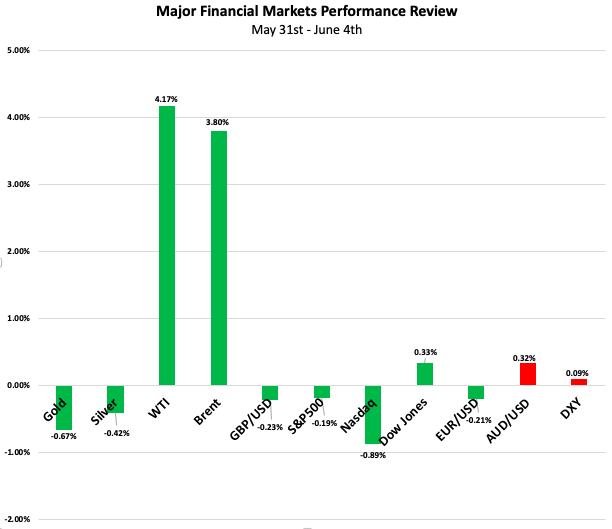 Last week, oil prices extended the rally to their highest level in more than two years due to OPEC+'s optimistic expectations for the global oil supply and demand balance and the pending U.S.-Iran nuclear deal. On the one hand, several OPEC+ officials said crude oil demand has improved significantly, and OPEC+ members agreed to add about 450,000 bpd to previously planned output starting in July. At the same time, Saudi Arabia will continue to ease its earlier 1 million bpd production cut. On the other hand, talks between the U.S. and Iran on resuming the 2015 nuclear deal have been temporarily postponed. Iranian officials indicated that Iran is unlikely to reach a final agreement with the U.S. in this round of negotiations, which has somewhat eased market concerns over increased crude supply from Iran. In addition, crude oil inventory data also boosted crude oil prices. API and EIA recorded big drops of 5.36 million barrels and 5.1 million barrels respectively, much better than market expectations, clearly reflecting that crude oil demand is gradually recovering. As of last week's close, U.S. crude and Brent crude were at $69.38/barrel and $71.6/barrel, up 4.17% and 3.80% for the week. See live WTI crude price below:

Going forward, crude oil prices may continue to be supported by strong demand in the U.S., Europe and China, as well as soaring commodity prices due to stronger inflation, but investors still need to be wary of the rising COVID-19 infection rate in India that could hamper the recovery in crude oil demand, as well as the blow to commodity markets caused by comments that central banks would tighten their quantitative easing (QE).

The dollar pulled up strongly, while gold suffered a sharp setback

At the start of last week, gold hovered around $1,900 an ounce on expectations that the Federal Reserve (Fed) would not tighten its QE any time soon and as investors weighed comments from Fed officials for potential clues about tapering stimulus. Later, gold took a sharp hit, falling more than 2% at one point, its biggest intraday drop since February, on the back of a surge in U.S. jobs and record economic data. But weaker-than-expected non-farm payrolls data helped gold to pull up strongly. At last week's close, gold reported $1889.9 an ounce, down 0.67% for the week. Remarkably, the Fed has begun planning to wind down the portfolio of the Secondary Corporate Credit Facility through its previous emergency lending facility, which appears to be sending a signal to taper QE. Moreover, Philadelphia Fed President Patrick Harker said it would be appropriate to "slowly and cautiously withdraw" from bond purchases at an appropriate time. As a result, the comments on tightening QE were volatile for the gold market, while persistently strong inflation is good for gold's appeal. See live gold price chart below:

On the dollar index, the week started as a weak one, but the greenback rebounded strongly to 90.5 after ADP payrolls posted their biggest gain in nearly a year and the services PMI rose to a record high. Finally, the U.S. dollar index ended the week at 90.134, up 0.09%. As the U.S. reported continuous strong economic and employment data, expectations increased that the Fed will tighten its loose monetary policy, supporting the dollar in the short term. But inflation will force the dollar weaker in the long term.

New wave of the COVID-19 pandemic hammered the Australian dollar

Last week, the RBA left its cash rate and three-year yield target unchanged at 0.1% and was poised to decide on an extension of its yield target and quantitative easing programme. RBA governor Philip Lowe said inflation and wage pressures had been subdued, while a strong recovery was reported in the economy and employment data. AUD/USD fell on the release of the rate decision. On top of that, GDP data released last week showed that the Australian economy actually grew by 1.8% in the three months to March, beating market expectations. Nevertheless, the resurgence of the virus in Melbourne, Australia's second largest city, put parts of the country back under lockdown, pushing AUD/USD down to 0.76455, the lowest level since mid-April. As of last week's close, AUD/USD reported 0.7737, up 0.32% a week. This week, Australian Consumer Price Index (CPI) will be released, and it will be interesting to see if the data can provide further guidance as prices continued to rise due to the strong recovery of the Australian economy.

The euro surged and then retreated on strong economic data

Last week, Eurozone CPI data showed a year-on-year rise of 2% in inflation, the first time since October 2018 that headline inflation has been above the ECB's target of just under 2% and the highest increase in more than two years. The core CPI rose by 0.9% from a year earlier, compared with the previous data of 0.7%, as energy and unprocessed food prices rose sharply. In addition, Eurozone business activity surged in May as vaccinations accelerated and business restrictions eased. The IHS Markit composite purchasing managers' index (PMI) jumped to 57.1 in May from 53.8 in April, its highest level since February 2018. While these economic data showed strong signs of economic recovery in the Eurozone, ECB chief Christine Lagarde said the central bank will support the Eurozone "well into" its recovery from a pandemic-induced double dip recession. As inflation fears gripped the market, EUR/USD fell from a high of 1.225 to trade as low as 1.21042 and the currency pair closed the week at 1.2164, down 0.21%. Eurozone GDP is due to be released this week, after the European Commission raised its forecast for the European economy this year from 3.8% to 4.3%, and it will be interesting to see if the data provide further improvement.

Last week, stocks pulled back from their highs as the latest strong economic data in the U.S. continued fears that the Fed would raise interest rates too soon. Manufacturing and services PMI came in at 61.2 and 64 respectively, both record highs. However, the manufacturing PMI showed a backlog of orders due to supply and labor shortages that struggled to keep up with consumer demand, hampering the recovery. In addition, comments by U.S. President Joe Biden that he would change the minimum corporate tax rate to 15% helped U.S. stocks rebound from their lows. But the market wiped out earlier gains as fears of an early Fed rate rise came after ADP reported that private sector employment added nearly one million jobs in May. Subsequently, most information technology stocks rose broadly after U.S. non-farm payrolls recorded 559,000 jobs, below market expectations. At last week's close, the S&P 500 and NASDAQ fell by 0.19% and 0.89% to 4,192.85 and 13,614.51 respectively, while the Dow gained 0.33% to 34,577.04. See S&P500 chart below:

As stocks have traded in a narrow range for nearly a month, investors are watching closely for any signals that the Fed may start tapering its asset purchases. The U.S. CPI will released this week, after the previous data registered a 4.2% surge, the fastest pace in 12 years, and sparked a sell-off in Wall Street. If the data is strong, then the U.S. stock market may fall into turmoil.