US Dollar returns strongly, safe-haven gold is forced to give way?

Abstract: US dollar has rebounded while U.S. stocks continue their slide. Are prospects for an oil recovery dimming, with oil supplies on the rise? Non-farm payrolls data are expected to intensify bullion market turmoil. Since British re-imposed economic blockade, GBP shows weakness. Severe outbreak of COVID-19 in Europe may continue to have the euro under pressure! 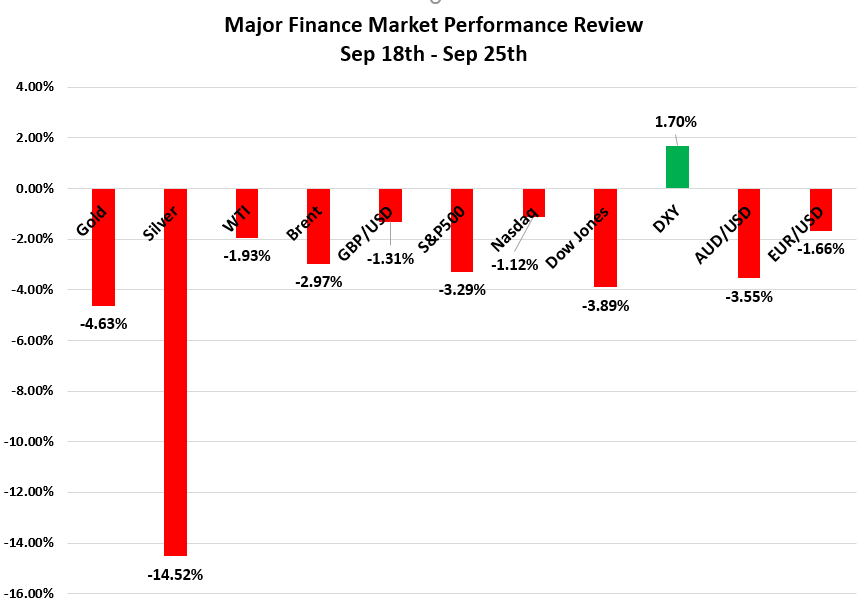 The U.S. dollar was the biggest winner in financial markets last week. The U.S. Dollar Index broke above 94, with increased risk aversion undoubtedly the biggest driver. Meanwhile, last week's focus remained on a two-day congressional testimony by Federal Reserve Chairman Jerome Powell, who reiterated the Fed’s commitment to do whatever it takes to stimulate the economy and said the economy badly needs a new stimulus package. But he's prevarication on Capitol Hill over whether to conduct a new fiscal rescue plan increased market pessimism, sending the dollar index higher and U.S. stocks lower. And the recent prolonged range-bound trend of gold and some disappointing economic data have shifted safe-haven asset investment into the dollar. House Democrats' $2.4 trillion proposal for a new coronavirus relief package, which includes unemployment benefits, direct subsidies, small-business loans and airline aid, is up for debate and could weigh on the dollar if it comes to a vote this week. By the end of last week, the dollar index was up 1.70% at 94.577.

Last week, U.S. stock markets were in turmoil. On the one hand, the three major U.S. stock indexes underperformed, weighed down by large U.S. technology stocks. On the other hand, the battle for a vacancy on Chief Justice of the Supreme Court Supreme Court is adding to the uncertainty of the U.S. election, which in turn has worsened market sentiment. Separately, last week's Markit PMI for manufacturing and services fell from previous readings and were worse than expected, providing further evidence of the bumpy road to recovery. By last week's close, the S&P 500, Dow Jones and Nasdaq were down 3.29%, 3.89% and 1.12% at 3246.59, 26815.44 and 10672.27, respectively. See Nasdaq100 real-time chart below:

Also, it will be interesting to see what happens after this week's release of GDP and non-farm payrolls data, where the unemployment rate last reported was 8.4%, the biggest improvement since the outbreak of COVID-19.

Last week, the oil market reversed its previous recovery trend into trouble again. API data diverged from EIA. The former posted a surprise increase in crude inventories of 691,000 barrels, while the latter reported a decline of 1.6 million barrels, as well as a decline of 4 million barrels in the gasoline sector, compared with an increase of 400,000 barrels the previous week. The EIA data reversed the negative API impact of the previous day, with U.S. crude above $40 a barrel and Brent above $42, before both fell back and remained in range-bound trend. By the end of last week, U.S. crude and Brent crude fell 1.93% and 2.97% to close at $40.09 and $41.78, respectively.

With significant downside risks to crude oil, investors should pay attention to the following:

1. The second wave of the pandemic in Europe will again restrict economic activities, and thus the demand for crude oil will worsen.

2. The resumption of Libyan crude supplies will add to the current oil market.

3. Oil traders reported a sharp rise in Iraqi exports next month, which could signal an increase in its oil exports.

Therefore, with such increasing supply, the trend of oil prices is not optimistic.

Gold bulls are in trouble. Has gold lost its momentum?

Last week, gold bulls fled the market. Gold fell below the important $1,860 /oz level, which means further downside for the precious metal. While the current macro environment is favorable for its upward trend, the U.S. dollar, another safe haven, is favored this time around. New U.S. jobless claims for last week totaled 870,000. The reading came in above the consensus economist estimate of 840,000 and marked an increase from 860,000 of the previous week. As a result, the loss of momentum in the U.S. economic recovery could hamper the dollar's ascent and make gold a favorite. By the end of last week, gold was down 4.63% at $1,860 an ounce.See gold real-time price chart below:

In addition, the current political turmoil, particularly whether the outcome of the U.S. election will be disputed, and whether President Donald Trump will peacefully hand over power, is likely to increase demand for safe-haven assets. All these issues may support gold in the long term. In this week, the first presidential debate for the 2020 election will be held, as well as the non-farm payrolls data and ADP employment data will be released, may set off a bloodier gold and silver market, while investors should be on the alert for.

The British domestic and foreign troubles make the GBP's trend not optimistic.

Weakness in most non-US currencies was highlighted last week by the strength of the dollar. GBP was one of the worst currencies, hitting its lowest level since the end of July. In addition to the impact of the dollar, another important factor in the pound's move was British Prime Minister Boris Johnson's re-imposition of a curfew on reception locations to contain the spread of the virus. The GBP fell by 6.4% from its high of $1.3483 this month to $1.2723 last week. It later rebounded slightly after Rishi Sunak, the UK chancellor of the exchequer, announced a new job support scheme. The plan will top up workers' wages covering up to two-thirds of their hours, giving medium-sized enterprises who face depressed demand the option of keeping employees in a job on shorter hours rather than making them redundant. By the end of last week, GBP/USD was down 1.31% at 1.2745.

Last week’s manufacturing PMI came at 54.3 and services PMI at 55.1, both below previous readings, and the latter the lowest in nearly three months. This illustrates the scale of the challenges faced by economic recovery. And the British government's hardline attitude towards exiting the European Union makes the market extremely worried about the trend of GBP. This week, the UK GDP data will be released and may pose a risk to the GBP trend, after the figure contracted by 20.4% in the second quarter, a record low.

Eurozone PMI released last week showed the region's economic recovery stalled in September. In September, the Services PMI slid to 47.6, while the Manufacturing PMI rose to 53.7, signaling the services sector back into contraction. In addition, a worsening pandemic and a surge in new cases in the Eurozone have constrained economic activity, depressing risk sentiment. These setbacks to Europe's economic recovery kept the euro in the doldrums, leaving it at $1.1630 by the end of last week, down 1.66% on the week.

As for the Brexit negotiations, representatives from the European Union's negotiating partners said that they opposed the British Prime Minister's violation of the International Law, but that it would not hinder their efforts to strike a deal. Brexit negotiations continued this week, but with just over two weeks to go before the October 15 deadline for a deal, and some officials have warned that the talks could stretch into November or even December. The Eurozone's CPI to be released this week will be of interest after the latest economic bulletin from the European Central Bank last week showed that core inflation in the region would remain subdued for the next two years.

Last One With recent unfavorable news,is gold and silver deep in trouble?
Next One Countdown to Brexit, downside risk for GBP has intensified?
Latest Release
Popular Reading