Abstract: It's hard to break Brexit deadlock, and the GBP dropped. As the U.S. election approaches, the turmoil in the U.S. stock market intensifies. Could gold find a new lease of life as the U.S. Dollar Index loses ground? Oil prices are heading into a cliff, and the outlook for the oil market is not optimistic. Will the euro's strength continue amid continuously increasing COVID-19 infections in Europe? 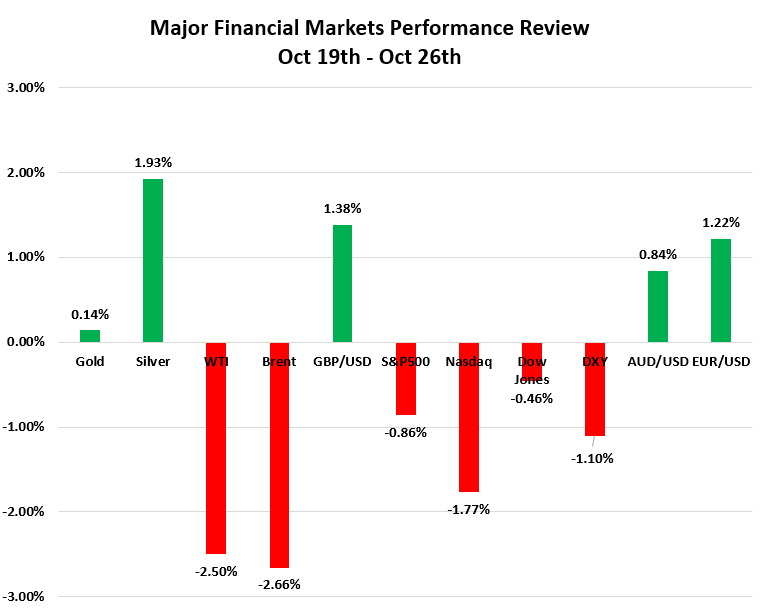 The pound rose against the dollar for the third day in a row at the start of last week and broke through 1.3 on Wednesday. Contributors to the sharp rise included: First, the resumption of Brexit talks by the EU and the UK; Second, positive UK economic data, including the UK inflation rate of 0.5% in September, significantly higher than the previous reading of 0.2% and expectations of 0.4%, and the PPI, which rebounded to 1.1%, beating expectations of -0.9%; And third, the dollar's short-term weakness. But starting Thursday, GBP gave up nearly half of its previous gains as the dollar rallied and the U.K. government imposed a strict economic blockade. Also, there was positive news from UK retail sales, which rose by 4.7% in September, well above expectations of 3.7%, while Friday's preliminary PMI readings on the UK's manufacturing and services sectors were mixed. PMI for the manufacturing industry came in at 53.3 in October, beating expectations, whereas PMI for the services sector registered at 52.3, well below expectations. Such data capped GBP's rally against the dollar, sending it back below the 1.3100 mark. At the close of last Friday, GBP/USD rose 1.38% to 1.3040. See real-time GBP/USD price chart below:

As for the Brexit negotiations, time is running out to strike a deal with the EU before the end of the year, although Britain signed a free trade agreement with Japan on Friday, the first such major post-Brexit deal. It comes after British Prime Minister Boris Johnson expressed a negative view of the Brexit negotiations, saying they would end unless the EU showed more flexibility. Whether the two sides can reach an agreement through concessions, however, remains deeply questionable. In addition, the renewed blockade of the British economy forced the British government to implement new economic assistance measures, and the liquidity that it released into the market undoubtedly weighed on the pound. As a result, uncertainty about GBP will increase.

Turmoil in the U.S. stock markets and uncertainty over the stimulus package

In addition to the stimulus package, last week saw good news on jobless claims. The U.S. recorded 787,000 initial claims, sharply below expectations of 860,000. Its economy continued to grow across the country as it recovered from the coronavirus pandemic, but not by much, according to Beige Book from the Federal Reserve. Separately, spooked by the political turmoil in the U.S., last week's warning by US officials that Iran and Russia were trying to interfere in the election by spreading false information after Hunter Biden’s email controversy has heightened political risk on the U.S. stock market. With third-quarter GDP data due this week, it will be interesting to see if it matches economists' expectations that the U.S. economy grew at a 30% pace in the past quarter.

Dollar index remains weak, while gold is probably on track for another peak

Last week, the dollar index was losing ground. Dollar sell orders surged after the White House said it expected a deal on the stimulus package to be reached within 48 hours. That led to a three-day slide in the dollar index last week, briefly falling below 93. Then, it rallied to near 93 as positive employment data and political turmoil over the final election campaign prompted investors to choose the greenback instead of gold as a haven. As of last week, the dollar index dropped by 1.1% to 92.746. As mentioned earlier, gold moves in the opposite to the dollar. The metal, which had set a positive record for the third consecutive day in the first three days of last week, broke through the $1,930 / oz barrier before briefly retreating to below $1,900 / oz. At Friday's close, it traded at 1901.17, up 0.14%.

Going forward, the dollar is still not optimistic. In addition to the expanded quantitative easing signaled by central banks, the U.S. political risk and economic recovery will be key to dollar prices. And in the extreme negative correlation with gold, the dollar may become the dominant factor in the gold market.

Last week, the crude oil market fell into another violent convulsion. After breaking above $41.87 and $43.28 respectively on Tuesday, U.S. crude and Brent crude tumbled by more than 4% to $39.81 and $41.48 on the next day. A big reason for the sharp drop is that API and EIA crude inventory data released last week fell short of previous readings and expectations. The API recorded an increase of 584,000 b/d, while the EIA recorded a less than expected decrease of 1,010,000 b/d. Meanwhile, U.S. gasoline inventory data showed the highest change since the week of June 5, and inventory at Cushing, Oklahoma, was up for five consecutive weeks. Last week, U.S. crude was more volatile than Brent crude and showed the key resistance level at $42 an ounce to keep U.S. oil from rising. Shortly afterwards, both rebounded sharply, after Putin said Russia is open to delaying planned OPEC+ output hike. U.S. crude and Brent crude ended the week at 39.72 and 41.66, down 2.5% and 2.66%, respectively.

Going forward, oil investors should focus on the following risks:

1. An increase in oil supply as shale oil production recovers;

2. Risk aversion that may intensify as the election approaches;

3. Further blocking measures in Europe and the potential threat that OPEC could start oil supplies as planned from January next year, which will add to the gloom in the oil market.

Will the euro remain strong as the virus re-hits Europe?

Last week, the euro turned to weak against the dollar. ECB chief Christine Lagarde said virus resurgence is a clear risk to the economy, in a sign that policy makers are gearing up for more monetary stimulus. The euro surged to a key resistance level of 1.188 against the dollar after the comments, its highest in nearly a month. And it could be more popular since social bonds issued by the EU are highly sought after central banks and official institutions. But fears of a worsening virus and a rebounding dollar, on the other hand, limited the euro's gains. As of last week, the euro closed at $1.1859, up 1.22%. European nations saw a sharp increase in confirmed cases, forcing several major economies to implement strict curfews. Not only that, the Robert Koch Institute said in a statement last Thursday that the spread of COVID-19 is out of control and that it has listed Ireland, Poland, Switzerland and the UK as risk areas for the spread of COVID-19. There is no doubt that this casts a shadow over the European economy and the euro. Investors should be watching this week for more information on the progress of Europe's economic recovery and the monetary policy when the Eurozone's interest rate decision and GDP data are released.

Last One With recent unfavorable news,is gold and silver deep in trouble?
Next One The strong rebound of USD, Gold suffered a heavy setback!
Latest Release
Popular Reading