Abstract: Rising risk aversion puts the Australian dollar under pressure. AUS200 index keeps rising as the RBA speaks in a dovish tone. U.S. stocks struggle as divergences over the new stimulus package resurface. Gold bulls and bears coexist, and short - term volatility may intensify in the gold market. Could a V-shaped recovery in oil prices be under threat as demand concerns mount? Europe's economic crisis could resurface, but the ECB says it has adequate capital. 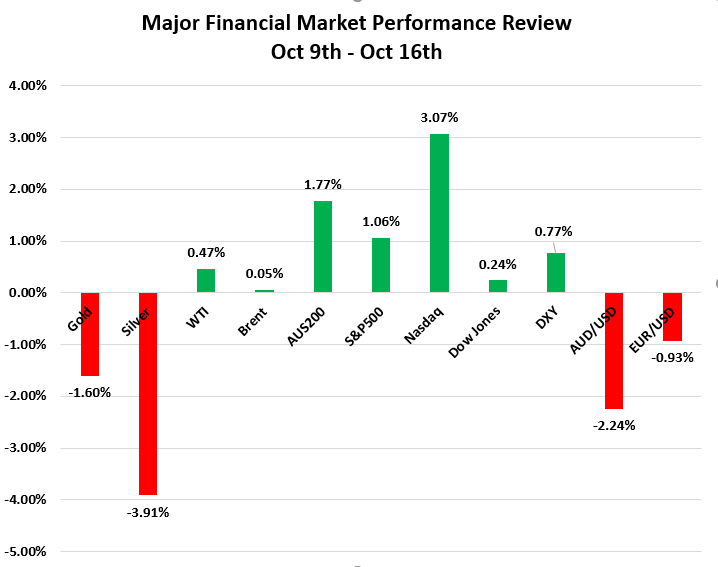 Last week, Australia's unemployment rate ticked up to 6.9% in September from 6.8% in the previous month. But it was lower than economists' median estimate of 7%. The Australian dollar fell slightly against the U.S. dollar after the data. Because of the closure of Victoria, the Australian economic recovery, which is mainly driven by the improvement in other areas, has been affected. Separately, RBA Chairman Philip Lowe said existing policy measures could not be expected to bring inflation rates back to 2.5% quickly and that interest rates could be cut to 0.1% from 0.25%. The Australian dollar depreciated sharply to 0.70562 against the U.S. dollar after the comments. In addition, rising risk aversion also added to pressure on the Australian dollar. At the close of last Friday, AUD fell by 2.24% at 0.70757. See real-time AUD/USD price chart below:

While the RBA's dovish comments sent AUD lower, the AUS200 index crept higher, and had climbed to its highest level in seven months last week. It closed at 6210.3, up 1.77% on the week.  See real-time AUS200 price chart:

In addition, Australian authorities are checking with the Chinese government over a report by the Australian media that the Chinese government has asked its companies to stop importing coal from Australia, raising concerns about further deterioration in relations between the two countries. This week's release of RBA minutes and retail sales data will give investors more insight into RBA officials' views on current monetary policy and the progress of Australia's economic recovery. As a result, the Australian dollar and stocks are also likely to be volatile.

Are U.S. stocks heading back into correction after stimulus package hits roadblock?

Last week, U.S. stocks faced the risk of a short-term correction. U.S. stocks were up and down as negotiations for the new stimulus package faltered. U.S. Treasury Secretary Steven Terner Mnuchin said last Wednesday that the negotiations remained far apart and that reaching an agreement before the election would be difficult. The news sent all three U.S. stock indices down from near record highs. Meanwhile, new jobless claims rose to 898,000 last week, the highest level since August 22. The data added to worries about the U.S. economy, sending three U.S. stock indexes into extended declines. However, U.S. President Donald Trump pared losses on the three stock indices on Thursday after repeating his message that "a stimulus bill is likely to come before the election" and he aggreed to have a bigger stimulus package. On Friday, U.S. retail sales data were released to see a 1.9% month-over-month increase in September, beating expectations and giving stocks a fresh boost. At last Friday's close, the S&P 500, Nasdaq and Dow were up 1.06%, 3.07% and 0.24%, respectively, at 3483.34, 11713.87 and 28494.2.

In addition, the Hunter Biden email controversy and two test positive for COVID-19 in Kamala Harris's campaign have added to the uncertainty over the outcome of the U.S. election. It is worth noting that last week's market gloom was also caused by the suspension of phase III trials, which had been going well, by Johnson & Johnson and Eli Lilly, so investors were sceptical that any vaccine would be developed quickly.

This week, U.S.PMI for manufacturing and services from IHS Markit provide investors with a better gauge of the progress of the U.S. economic recovery, and it will be clear whether claims for jobless benefits will fall sharply. In the meantime, however, the uneven recovery has added to investors' concerns as the earnings season begins this week. In the future, volatility in the U.S. stock market will continue to increase due to political and economic uncertainty.

The recent negative correlation between gold and the U.S. dollar has become ever closer. Gold had previously broken above $1,930 an ounce, but fell below $1,900 early last week and briefly hit a low of $1,882 as little progress on the U.S. stimulus bill pushed the U.S. Dollar Index to a large extent last week, weighing on the metal. Gold, however, edged back above $1,900 because investors worried that renewed lockdown measures for a second wave of the COVID-19 crisis would stifle the economic recovery and U.S. President Donald Trump sounded upbeat about a deal on a stimulus package. By the close of last Friday, gold fell by 1.6% at 1898.59. See real-time gold price chart:

Despite last week's volatility, gold prices are likely to find long-term support. On the one hand, due to the economic blockade caused by the second wave of the pandemic in Europe and the United States, central banks had to face the possibility of intensifying “quantitative easing”. On the other hand, the uncertain outcomes of the U.S. election and Brexit negotiations may increase risk aversion. Therefore, even gold trading is in chaos currently, gold is still likely to look bullish.

In terms of the dollar, the release of U.S. economic data has had far less impact on the greenback than the news on the stimulus bill, which is now being delayed to make the dollar on a short-term buying spree. By the end of last Friday, the U.S. Dollar Index was up 0.77% at 93.777. The dollar is likely to remain weak as recent U.S. economic data, while continuing to improve, have not yet reflected the negative impact by the second wave of the pandemic and the lack of financial assistance.

Crude oil demand is not optimistic due to the second virus attack.

Crude oil prices began the week with a weak recovery. US Crude and Brent Crude plunged to $39.07 / Barrel and $41.38 / Barrel on Monday as oil production in Norway stalled, Hurricane Delta made landfall and oil production has been allowed to resume at Libya's Sharara oil field. Subsequently, the international Monetary Fund adjusted global economic growth from -5.2% to -4.4% in 2020, and the UAE energy minister's optimistic outlook for the crude oil market helped the two indexes rebound. But the good times did not last long. OPEC+ 's announcement that further easing of production cuts will be implemented in January 2021 turned them from positive to negative territory. Adding to the gloom, OPEC's secretary-general said at a JTC meeting that the recovery in oil demand was less than expected, sending U.S. crude and Brent crude down about 4%. The EIA then reported a bigger-than-expected decline of 3.818 million barrels in crude inventories, giving a small boost to their prices. At the close of last Friday, U.S. crude and Brent crude were trading at $40.74 a barrel and $42.80 a barrel, up 0.47% and 0.05%. In addition, the world's three largest energy agencies released their energy reports, in which the forecasts for future oil demand were largely unchanged, as shown below:

1. The resume of Libyan crude oil production, resulting in an increase in oil supply, which puts pressure on oil prices.

2. More aggressive restrictions of major European economies, which could further undermine fragile economies and the recovery in oil demand.

A second wave of COVID-19 is hitting the EU economy, ECB is dovish as expected

Last week, the euro was in a tailspin against the dollar. Currently, there are over 7.4 million cases of infection in Europe, resulting in 21,478 deaths and an alarming increase in the number of hospital admissions. Europe is again facing a more serious economic blockade measures. The euro's slide against the dollar was more than enough to reflect the market's concerns. Separately, Christine Lagarde, President of the ECB, said last week that the central bank was ready to take substantial stimulus measures amid a surge in new cases. At the close of last Friday, the euro was trading at $1.17158, down 0.93% for the week.

In terms of Brexit, despite the softening in the UK's attitude towards the process of leaving the EU, British Prime Minister Boris Johnson said he had concluded that the Brexit negotiations were "over" and that they should prepare to leave the EU without a deal. So far, with fisheries being a key sticking point in the Brexit negotiations, EU leaders agreed to extend trade talks with Britain for several weeks at an EU summit last week. In the future, the trend of the euro will continue to depend on the development of the pandemic and Brexit. This week, Eurozone PMI data are due to be released, with previous readings showing the service sector is still contracting, and it is doubtful that this will be reversed, given the COVID-19 crisis.