Countdown to Brexit, downside risk for GBP has intensified?

Abstract: Brexit deal talks are in 'final sprint' and may move the British pound. U.S. stocks gain momentum as markets look for the new stimulus package. Since Hurricane Delta is back over the Gulf of Mexico, will oil prices continue to surge this week? the Australian dollar is expected to go upwards after risk sentiment rebounded. Will gold and silver, which have seen many ups and downs, will be strong in the week? 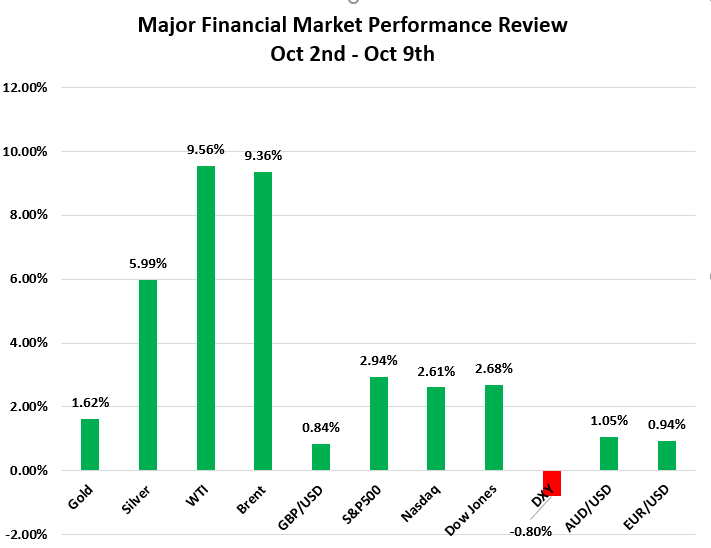 Last week, Britain's GDP figures reflected a slowing economic recovery. It rose by 2.1% in August, less than the 4.6% expected. Dean Turner, economist at UBS Global Wealth Management, said activity in the UK had weakened in September, based on recent surveys. The UK government has imposed stricter local restrictions on economic activity, raising concerns that the recovery may not last into the final quarter of the year. Meanwhile, a slowing economic recovery is likely to prompt the Bank of England to increase its bond-buying program at its November meeting.

In addition, negotiations to leave the European Union, due to expire on October 15, remain deadlocked. While both sides have expressed a willingness to work toward a consensus, they have shown no signs of backing down. Last week, the British government said it would leave negotiations with the EU if a Brexit deal was not reached by October 15, and was preparing to leave the EU's single market and customs union on December 31. The EU hit back, saying it would not give in to pressure. As a result, the pound has been trading above the 1.29 mark since losing ground on Tuesday after briefly breaking 1.3 in the Brexit talks. Then, it breached 1.3 again on Friday, and closed at 1.3046, up 0.84% on the week.  See real-time GBP/USD price chart as below:

Britain's worrying unemployment will resurface this week when the unemployment rate is published. In addition to Brexit, the US election will become another dominant factor in the trend of GBP as it involves how the new American leader will treat the relationship between Britain and the US in the future.

U.S. stocks continue to gain momentum as the stimulus package looks set to be reached

News about President Donald Trump and the new U.S. stimulus package came to the forefront of global markets last week and helped shape recent U.S. stock market movements. From the start of Mr Trump's three-night hospital stay, when he tested positive for coronavirus, to his return to the White House, it charted the process by which U.S. stocks have recovered hope from the gloom. After leaving the hospital last Tuesday, Trump rejected the new stimulus proposal from Democrats and ordered his representatives to stop negotiations on fiscal stimulus until after the election. As a result, the American stock market turned down by the rise, and market panic intensified. Then the three indices rallied for three days in retaliation after Trump reversed his remarks hours later and said he was willing to sign the new stimulus package as soon as possible when polls suggest that Joe Biden has a sustained lead over Trump to go until the U.S. election. At the close, the S&P 500, Nasdaq and Dow were up 2.94%, 2.61% and 2.68% for the week at 3346.83, 11364.6 and 28425.51, respectively. See real-time S&P 500 chart as below:

Separately, the ISM Services PMI for September came in at 57.8%, up from 56.9% in August and beating expectations, suggesting the economy is still slowly improving. But last week's Minutes of Fed meeting showed how the U.S. economy follows the prevention and control of COVID-19 and highlighted how dependent the U.S. recovery is on the pending stimulus package. America's inflation rate is due to be released this week, after a previous reading of 1.3%. Fed policymakers, meanwhile, don't expect the 2% inflation target to be met until 2023 or 2024. U.S. retail sales data are also due this week and are expected to show another improvement. In the short run, the U.S. stock market seems to be dominated by outside news and sentiment, mainly news on the election and the new stimulus package, while in the long run, U.S. stocks are likely to keep rising supported by inflation targets.

Last week, the crude oil market was very bright. Oil prices not only reversed their decline, but rose for four straight days. U.S. crude and Brent crude plunged below $37 a barrel and $39 a barrel after news broke that President Trump was infected with the new Coronavirus. However, they achieved a sharp rebound last week. At last Friday's close, U.S. crude and Brent crude rose by 9.56 % and 9.36% to close at $40.55 and $42.78, respectively. See real-time WTI price chart as below:

What factors have contributed to the rally?

1. An improvement in Trump's condition has offset the negative impact of API crude stocks, which recorded a 951,000 barrel increase last week.

2. while the EIA recorded a 500,000 barrel increase in crude oil inventories, gasoline stocks fell by 1.4 million barrels, nearly double their previous decline, reflecting an increase in U.S. economic activity and providing a bullish signal for the market.

3. The possibility of an agreement on the new stimulus package has increased, and risk sentiment has intensified.

4.  a strike by workers in the Norwegian oil sector could soon wipe out nearly one-quarter of the country's petroleum output.

5. Hurricane Delta forced operators to shut-in almost 92% of crude output in the Gulf of Mexico.

Moreover, a marked shift in OPEC's forecast for global oil demand showed that the demand is expected to surpass pre-pandemic levels by 2022 and to grow steadily until the end of 2030, after which it will level off. Saudi Aramco, a Saudi Arabian multinational petroleum and natural gas company, said demand for crude oil will continue to grow in the long term, driven by population growth and economic growth, adding that it is ready to increase production capacity.

The Joint Technical Committee (JTC) of OPEC and allies (OPEC+) will hold its next meeting on Oct.15, when the producers' attitudes towards supply/demand and the "cheating countries" will be particularly important. Long-term risks remain in the crude oil market, because the second wave of the COVID-19 forced some parts of the world economy to be re-blockades, while demand for crude oil may be depressed as countries pay more attention to global warming, thus promoting the use of clean energy.

May the Aussie dollar get another boost from positive Australian economic data?

Australia's fiscal and monetary policy was announced last week. The Reserve Bank of Australia said it decided to maintain the targets for the cash rate and the yield on 3-year Australian government bonds of 25 basis points and stressed it would keep monetary policy loose to support employment. The AUD/USD pair briefly regained the 0.7200 mark before retreating to around 0.71 on the news. Shortly after the announcement, the Treasurer of Australia delivered a fiscal deficit of USD $153 billion between 2020 and 2021, equivalent to 11.6% of Australia's GDP. This amount of money is being used to revive the virus-hit Australian economy and to create jobs for the hundreds of thousands of people who have lost their jobs as a result of the economic blockade. On Tuesday, AUD fell sharply against USD and then rose for the third straight day. At last Friday’s close, the AUD/USD pair rose 1.05% to trade at 0.72626.

The Australian housing, on the other hand, offers good news. The value of owner-occupied home loans issued was up a seasonally adjusted 13.6% on month in August, better than the previous reading of 10.7%. Home investment loans, meanwhile, rose 9.3% in August, up from the previous reading of 3.5%. It can be seen that the Australian economic recovery is proceeding steadily. The country's unemployment rate, reported to have stood at 6.8% in August, will be revealed this week. Will it fall sharply in September as the economy of Victoria has restarted after the second wave of the virus?

U.S. dollar could be in a significant decline, whilst gold is expected to rise steadily.

Gold had a wild week. As risk aversion intensified at the start of last week, the metal briefly traded near $1,920 an ounce, but fell to $1,874 after losing the $1,900 mark on Trump's expression of scrapping the stimulus package. It then bounced back to $1,930 an ounce as renewed hopes for the package prompted investors to increase their holdings of inflation-proof gold. At last Friday's close, gold was up 1.62% at 1,929.4. See real-time gold price chart as below:

Silver was more volatile than gold over the past week. It fell 6% to below $22 an ounce from above $24 on Tuesday before rising for three days and topping $25 on Friday. The metal closed at 25.116, up 5.99% for the week. See real-time silver price chart as below:

What factors will move gold and silver prices?

1. As the second wave of the COVID-19 pandemic comes and the pace of economic recovery slows down, the central banks will expand fiscal stimulus, leading to higher inflation rates and accordingly more upside of gold.

2. Political risks from the U.S. election will continue to move in parallel with gold. Support for Democratic candidate Joe Biden has been rising, because the market sees him as likely to bring more stimulus if he is elected.

3. With more market liquidity likely to come, the U.S. dollar has fallen sharply and gold is likely to regain investors' favor.

Thus, gold and silver remain bullish in the long term and may become volatile in the short term.

Last One With recent unfavorable news,is gold and silver deep in trouble?
Next One RBA is expected to cut rate, AUD and AU index's reaction varies
Latest Release
Popular Reading