The surge in risk sentiment, brings positive outlook to AUD?

Abstract: Can the Australian dollar rise above the resistance amid rising concerns about Australia-China relations? U.S. stocks recorded the new high on post Thanksgiving Day. Falling gold prices have sparked fears among gold bulls. What is behind the buoyant crude oil market? While Europe's economy treads on thin ice, the euro has taken a different tack. 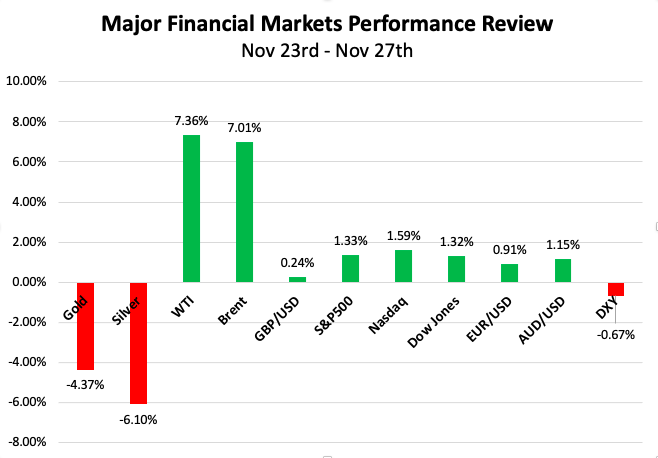 Post Contents [hide]
AUD is profiting from the risk sentiment

The Aussie dollar got off to a bad start last week as the U.S. dollar rebounded, but it also gained support as positive news about the vaccine development and and a clearer US election result boosted the risk-taking mood. In addition, the Aussie dollar's rise was also boosted by better COVID-19 prevention and control in Australia than in Europe and the United States. It had briefly approached 0.74 last week, hitting its highest level since early September. At Friday's close, the Aussie was trading at 0.7386, up 1.15%. See AUD/USD live chart below:

Despite the current increase in bullish sentiment towards the Australian dollar, concerns remain about Australia's increasingly tense relationship with its largest trading partner, China. While Australian Prime Minister Scott Morrison took a positive turn on his country's relations with China, saying he wanted a "mutually beneficial" relationship, China made a lukewarm response and was set to impose anti-dumping duties of more than 100% on Australian wine. Additionally,  a "deeply troubling" standoff involving Australia's coal, blocked from Chinese ports for months, has not made much headway.

This week, the RBA's decision on interest rates and Australia's GDP are due to be released, after it has slashed its official cash rate to 0.1% as it desperately tries to prop up an Australian economy that has been smashed by the Coronavirus crisis. Although no change in interest rates is expected this time, the RBA's attitude to the Australian dollar is particularly important, which could send the currency into a tailspin. Trade Now>>

1. Good news came from the high-profile development of the Astrazeneca vaccine, which boosted optimism because the vaccine is easier to store and cheaper.

3. The White House agreed to begin a transition of power with Biden, lessening the political risk.

Wall Street even busted through its latest milestone Tuesday, when the Dow Jones Industrial Average topped 30,000 for the first time. In addition, minutes from last week's Fed meeting show that Fed officials intend to increase easing on the bond-buying front, but differ on exactly how. Regarding the economic outlook, the Fed believed the U.S. economic recovery remains on track, although the pace of improvement in the labor market is slowing. Last week's report on initial jobless claims did bear that out, showing 778,000 new claims, the first two-week gain since July. The new wave of COVID-19 crisis in the United States has taken a toll on the labor market. Investors should watch with caution this week, when the ADP and non-farm payrolls data will provide important guidance on current U.S. employment conditions.

Could the after-market turn the corner after gold long positions were encircled?

At the start of last week, fresh good news from the vaccine sector sent gold bulls into another funk. On Monday, gold broke below a key support level of $1,850 an ounce, further opening the downside for the metal. It took another beating and went into negative mode, at one point plunging to $1,800 an ounce, its lowest level since July, after Mr Trump then agreed to a transition with Mr Biden, putting an end to post-election political risk. The metal then edged higher with 1,800 support on the release of disappointing U.S. jobless claims. But it finally fell below 1800 on Friday and as low as 1774. It ended the week at 1787.5, down 4.37%. On top of that, last week's sell-off in gold ETFs, which played a big role in gold's August climb to record highs, resumed, according to Bloomberg. Looking ahead, gold's appeal to investors is unlikely to disappear in the short term considering an environment in which central banks around the world are trying to stimulate inflation, despite the current downward trend.

Last week's outperformance in crude oil sent bulls into a frenzy. So far, oil prices have risen for four straight weeks, making the bearish voices muted. It hit new highs last week. U.S. crude and Brent crude surged above $46 and $49 a barrel, respectively, in the first three days of the week, their highest levels since the market plunged in March.

The contributors to the surge are:

1. Positive news from the vaccine sector has made investors more risk-taking.

2. EIA crude oil inventory data was much better than expected, adding to the oil market.

However, the oils gave up some of their gains as some OPEC members were divided over future plans, arguing that their political and economic conditions should be taken into account before slowing production. By the end of last week, U.S. crude and Brent crude were at 45.54 and 48.24, up 7.36% and 7.01% respectively for the week.

OPEC's Allies had discussed extending production cuts for three to six months but had not reached an agreement. Investors should watch with caution ahead of this week's OPEC+ meeting, where members will take a final vote on whether to cut output. Trade Now>>

More articles: Could oil prices hit a ceiling with a lack of fundamental support?

Europe's economy in trouble, but the euro climbed higher

The dollar's weakness last week sent the euro choppy higher, and despite a steady stream of negative economic data, the euro has not been seriously hampered. The PMI for the Eurozone's manufacturing sector fell to 53.6 from 54.8, the lowest in three months but above expectations of 53.1. And the services PMI declined to 41.3 from 46.9, the lowest in nearly six months and below expectations of 42.5. Such contraction amply illustrated the impact of the European economic blockade on its economy, but the euro appeared to shrug off the data. By the end of last week, the euro was trading at $1.1963, up 0.91% on the week.

Separately, ECB minutes released last week showed broad support among ECB officials for the Governing Council to set a new economic rescue policy on Dec. 10, and ECB is widely predicted to increase and extend its 1.35 trillion-euro ($1.6 trillion) pandemic bond-buying program and provide more long-term funding to banks. The Brexit negotiations that were interrupted due to the pandemic have resumed, and investors should pay careful attention to its progress. This week, the Eurozone's CPI and retail sales figures are due to be released, which are likely to have a negative impact on the euro to some extent due to market expectations that the Eurozone economy may slip back into recession in the fourth quarter.

Last One With recent unfavorable news,is gold and silver deep in trouble?
Next One OPEC+ postponed its planned production increase: Oil prices were buoyed and fluctuated
Latest Release
Popular Reading