Abstract: The stimulus package is in a tug of war, causing the U.S. stock market to hit a roadblock. A pullback in investment capital could mean a decline in gold. Risk sentiment rises, and oil prices increase slightly. The Brexit deal is in flux and the pound stands at a fork in the road. With record highs just around the corner, is the Bitcoin market back on its feet? 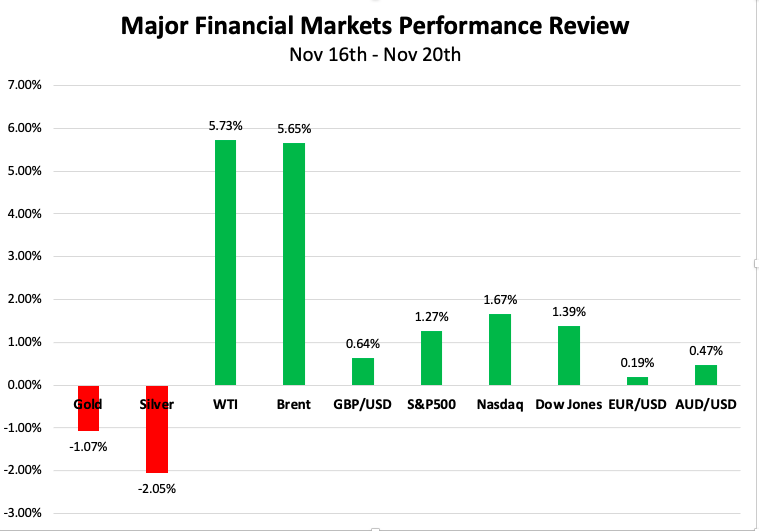 The last week has been marked by setbacks for U.S. shares. Earlier that week, vaccine maker Moderna announced that its vaccine is 94.5 percent effective, better than Pfizer had previously reported. The three major U.S. stock indexes subsequently soared, with the Dow in particular attempting to hit an all-time high of 30,000. Then the turmoil began after the release of October's retail sales data, which showed a rise in new infections and a drop in household income sent retail sales just up 0.3%, less than economists' expectations for a 0.5% increase. Separately, weekly initial jobless claims for state unemployment benefits rose to 742,000, higher than the previous reading and expected. While the worsening pandemic and weak economic data make a new stimulus package seem imminent, there was less positive news about the package than expected. This is because the two sides' positions on the scale of stimulus are far apart. Senate Republican leader Mitch McConnell, the current congressional negotiator, called the House's trillion-dollar bill a mockery, arguing that the stimulus should be around $500 billion. At last week's close, the S&P 500, Nasdaq and Dow rose 1.27%, 1.67% and 1.39% to 3,581.87, 1,1904.71 and 29483.23, respectively. See real-time Dow Jones index chart below:

This week, Markit manufacturing and services PMI, due to be released, are all the more noteworthy because of last week's weak retail sales data. In addition, investors will get a better sense of whether the U.S. economic recovery is really weakening when annualized GDP figures are released this week.

Gold lost ground last week. Following the announcement of Moderna’s breakthrough in vaccine development, the metal plunged $30 to a low near 1864. But it briefly traded above $1,880 as a global surge in the number of new cases and lockdown measures in more parts of the world revived risk aversion. Then Pfizer inc. updated data on phase III clinical trials of its vaccine, saying it was 95 percent effective, sending gold into a slump on Thursday. In addition, gold ETFs have been sold off for five consecutive days, according to Bloomberg, and the price has been in a downward sloping range since hitting a record high of $2,075.47 an ounce in August. Thus, the downward trend of gold is obvious. It ended the week with four straight losses at 1869.1, down 1.07% on the week. See XAUUSD live chart below:

Even so, Goldman Sachs remains a long-term bullish bet on gold. The bank holds a $2,300-per-ounce price target for the precious metal, implying a 20% rally from current levels over the next 12 months, with the metal continuing to consolidate in the short term.

There are three reasons to support Goldman's bullish position:

2. The dollar's downward trend will continue through 2021, which could help support gold prices.

3. Retail demand for gold in emerging markets continues to recover.

Hence, while the long-term trend of gold may be supported by these factors, investors should pay more attention to its short-term volatility. Trade Now>>

Positive signals from OPEC+. Will it bring a silver lining for oil prices?

The crude oil market got off to a good start last week with a piece of good news on vaccine development. U.S. crude and Brent crude rose above $42 and $44 a barrel, respectively, reversing earlier declines. Last week's API and EIA crude stocks data, which showed an increase of 4.17 million BPD and 800,000 BPD, respectively, sent their prices lower on Tuesday, especially driven by the sharp increase in API stocks. And positive developments on vaccines and a meeting of OPEC's ministerial monitoring committee offset the impact of the slight increase in EIA crude inventories, with U.S. crude and Brent crude trading higher again. At last week's close, U.S. crude traded at $42.42 a barrel and Brent at $45.08, up 5.73% and 5.65%, respectively.

At the OPEC+ ministerial meeting, ministers discussed extending current production cuts of 7.7 million barrels from Jan. 1 for three to six months, but said a final decision would be made by the end of this month. And while the progress in vaccine development has eased some of the pressure on OPEC, it won't be until the second half of next year that there will be a significant boost to crude demand. In the short term, the oil market remains under pressure from a broad economic blockade in Europe and the United States, a surge in North American production after the hurricane season and the restarting of production in some OPEC producers. But oil bulls still have hope ahead of meetings of OPEC and its allies on November 30 and December 1, where they are expected to discuss output policy again. So it remains doubtful whether crude prices will rebound. Trade Now>>

GBP started the week strong, buoyed by a weaker dollar and upbeat news on Brexit talks. It was further supported by the release of the UK CPI, which rose 0.7% in October from a year earlier, compared with expectations of 0.6%. Then it broke through 1.33 against the dollar. However, the pound turned from positive to negative as the dollar strengthened on Thursday and news of an abrupt halt to Brexit talks was announced. At Friday's close, GBP/USD traded at 1.3282, up 0.64%.

Brexit talks got off to a good start last week, but then the EU's chief negotiator Michel Barnier said that the UK and the EU had temporarily suspended talks after one of their negotiators tested positive for COVID-19. But to reach an agreement as soon as possible, the two sides would continue to negotiate via video conference. In addition, a trade deal between Britain and the EU could be announced on Monday, according to the Telegraph. But it is worth noting that the much-anticipated deal is once again full of uncertainty as EU leaders on Friday urged preparations for a no-deal exit. The pound's volatility was exacerbated by comments from people close to the Brexit negotiations that ranged from pessimism to optimism. Investors should watch with caution this week for more upside opportunities for GBP if a deal goes as expected.

The last week has been particularly good for Bitcoin, with five straight days of gains, especially since the Bitcoin price broke through the $18,000 mark last Wednesday and is trying to approach its December 2017 high near $20,000. In the past few months, many big companies have turned to Bitcoin. In October, Paypal announced a new service that will allow its customers to buy and sell and hold some major cryptocurrencies in their Paypal wallets. Square, another listed payment company in America, bought $50m in September, the equivalent of 4,700 Bitcoins, making it one of the biggest investors in Bitcoin among mainstream companies. Bullish sentiment towards Bitcoin has been fueled by increased investment intentions and improved adoption. On top of that, recent weakness in gold and the dollar has prompted some investors to take Bitcoin as a haven.

Some big investors, however, are pessimistic about Bitcoin's future. Last week, Bridgewater Ray Dalio said in a Twitter post that Bitcoin may not be a good store of wealth because of its great volatility. And if Bitcoin succeeds and poses a threat to countries, governments could declare digital currencies illegal. As a result, the market's view of bitcoin has been mixed. However, it should be noted that if the price of Bitcoin breaks through the historical high, there will be more possibility to rise. But investors should also be wary of the risk of volatility in the Bitcoin market. See real-time BTC/USD chart below:

Last One With recent unfavorable news,is gold and silver deep in trouble?
Next One The surge in risk sentiment, brings positive outlook to AUD?
Latest Release
Popular Reading