Oil Uptrend is observed. What drove the oil price to go up?

Abstract: Good news on vaccines ignited a rally in the oil market. U.S. stocks rose and then fell on renewed worries about the stimulus package. Safe-haven assets were sold, and so was gold. Uncertainty over the outcome of the Brexit negotiations has sent the GBP up and down. The virus continues its onslaught, casting a shadow over Europe's economy. 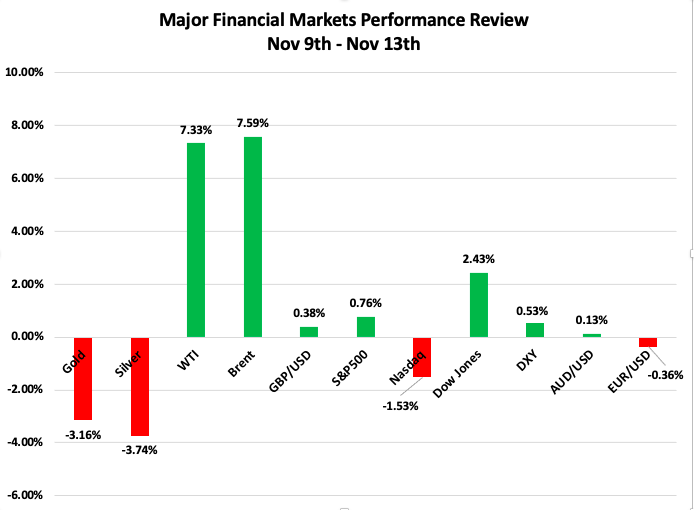 The oil market got off to a good start last week. U.S. crude and Brent crude rose more than 16% above $43 a barrel and $45 a barrel for the third day in a row after Pfizer revealed that its vaccine is 90% effective. In addition, API data released last week recorded a draw of 5.147 million barrels, and such a larger-than-expected decline in crude inventories also contributed to the sharp rally of oil prices. As a result, the blockbuster news has also rekindled hopes among some investors for a recovery in the oil market. However, a concern is whether they can sustain the upward trend. Last week's energy outlook reports by OPEC, the EIA and the International Energy Agency seemed to intensify that concern as the three energy agencies each lowered their 2020 crude oil demand growth projections, as shown below:

Chief culprits for the lower projections are as follows:

First, the COVID-19 pandemic in Europe and the United States is raging again, and the resulting economic blockade will inevitably lead to a decline in crude oil demand.

Second, crude oil production capacity has been restored in some regions including Libya, which boosted oil production to more than 1 million barrels a day.

Third, the introduction of COVID-19 vaccine next year may not significantly increase crude oil demand.

Moreover, EIA crude inventory data released last week recorded a rise of 4.277 million barrels, sharply higher than expected. All helped the crude oil market to turn from three days of gains into losses. At last Friday's close, U.S. crude traded at $40.12 a barrel and Brent crude at $42.67 a barrel, up 7.33% and 7.59% for the week. Going forward, they are likely to slip back into the narrow range they have been trading in for a long time.

U.S. stocks turned from gains to losses after another setback in the stimulus package

Last week saw a bright spot for US stocks. The end of the U.S. election and good news on the coronavirus vaccine helped push three major U.S. stock indexes to new highs, especially the S&P 500 and Dow Jones, while some technology stocks, which had benefited from the virus-hit economy, took a beating. The three major U.S. stock indices subsequently swung from gains to losses on fears of a worsening virus in the United States and increased uncertainty over the outcome of a massive economic stimulus bill. The number of new infections in the United States reached a record 144,000 a day last week, and the number of people in the nation's intensive care units reached the highest level since May 5. On the other hand, Trump announced that he had halted talks between his team and Democrats on the new stimulus package and referred them to Senate Majority Leader Mitch McConnell, who had tried to push for a smaller stimulus bill, while recent comments from McConnell and Democrats indicated that the two parties remain divided over the package. In addition, Fed Chair Jerome Powell said last week that the U.S. economy is still on track for recovery, but risks are increasing and that a vaccine is not a direct panacea for economic problems. At the end of last week, the S&P 500 rose by 0.76% to 3537.01, Nasdaq fell by 1.53% to 11709.59, and Dow closed at 29080.17, up 2.43%. See real-time DJIA Index chart below:

Beyond that, the final results of the election are not yet in, but the “blue wave” that markets have speculated was no longer there, and a Democratic and Republican Congress could be a positive influence on U.S. stocks. New U.S. claims for jobless benefits last week fell to 709,000, the lowest level since March. When U.S. retail sales data are released this week, it will be interesting to see if the regional economic blockade is a drag on retail sales growth. Trade now>>

Will the coming vaccine doom gold?

Gold, the haven asset, took a beating last week. There is no doubt that the vaccine breakthrough made life difficult for gold bulls. The metal plunged by more than 10% to $1,850 an ounce on Monday. It then rebounded slightly from support at 1850 and remained in a tight range as the market digested the vaccine news. However, gold investors seem to be sitting on the sidelines. The sharp rise in U.S. Treasury bond yields was also an important factor in forcing gold down. At Friday's close, gold was down 3.16% for the week at 1889.40. See real-time XAUUSD chart below:

Against a basket of currencies, the dollar reversed its slide in the election week last week, largely due to the plunge in gold and the stalled negotiations over America's stimulus and relief package which have some investors turning their attention to the dollar. At Friday's close, the U.S. dollar index was at 92.721, up 0.53% for the week. It should be noted that the U.S. Consumer Price Index (CPI) released last week showed consumer prices were unchanged in October, less than the moderate increase expected, and inflation will not be high as the virus spreads, so the dollar prices will remain bumpy.

More articles: Gold fluctuates violently as COVID vaccine is on the way！

Last week's Brexit negotiations and the dollar prices were important factors in the rise and fall of the pound. The pound rose slightly at the start of last week on renewed Brexit talks before extending its gains to 1.3313, its highest level in nearly two months.

The rise was prompted by ：

(1) the rejection by UK House of Lords of controversial parts of the Internal Market Bill, which had angered the European Union;

(2) Comments from UK's Chancellor of the Exchequer Rishi Sunak that significant progress has been made in trade talks; and

(3) Reduction in the negative risk that the Bank of England will introduce negative interest rates in 2021, thanks to the positive vaccine news.

But that didn't last long. Sterling fell against the dollar on Wednesday. On top of that, UK unemployment and GDP figures released last week were mixed. The unemployment rate rose to 4.8% in October from 4.5% in September as the COVID-19 continued to hit the UK job market. The headline GDP figures for the third quarter showed the UK economy grew 15.5%, gradually rebounding from a sharp decline. But the substantial improvement did not have a significant impact on sterling to reverse its downward trend. By the end of last Friday, GBP/USD was traded at 1.3198, up 0.38% on the week.

More about the recovery could be delivered by UK retail sales and CPI data, which will be released this week. On the Brexit side, “Familiar differences remain in EU trade talks on level playing field and fisheries,” British Prime Minister Boris Johnson’s spokesman said on Friday. And The spokesman further noted that Britain and the EU are likely to miss their mid-November deadline to clinch a post-Brexit trade, and that negotiations will resume in Brussels next week when EU leaders will converge for summit.

As the virus continues to spread, Europe's economy is still in crisis

The euro, which had previously been buoyed by the dollar's sharp fall, performed differently last week. It was trading at $1.1832, down 0.36% at Friday's close. The lackluster performance was primarily the result of heightened concerns about the European economy as the region was locked in a strict economic blockade. ECB President Christine Lagarde said last week the emergency bond-buying program and targeted long-term refinancing operations remain the main tools to provide further support for the Eurozone economy. She also warned that, while the latest vaccine news looked encouraging, the accelerating spread of the virus and tightening restrictions could threaten Europe's economy. There was, of course, some good news from Europe, where delegates agreed on a 1.8 trillion-euro ($2 trillion) budget and stimulus accord, but the deal still needs to be approved by the European Parliament. Madis Muller, a member of the ECB Governing Council, said the ECB should put ultra-cheap loans at the heart of its next stimulus package in December. In the future, the decisive role for Europe's economic recovery will still be whether COVID-19 can be effectively controlled and whether ECB can adjust its economic policies in time to respond to changes in the economic environment. This week's summit of EU leaders and the G20 will give more guidance on the economy and how to control the virus.