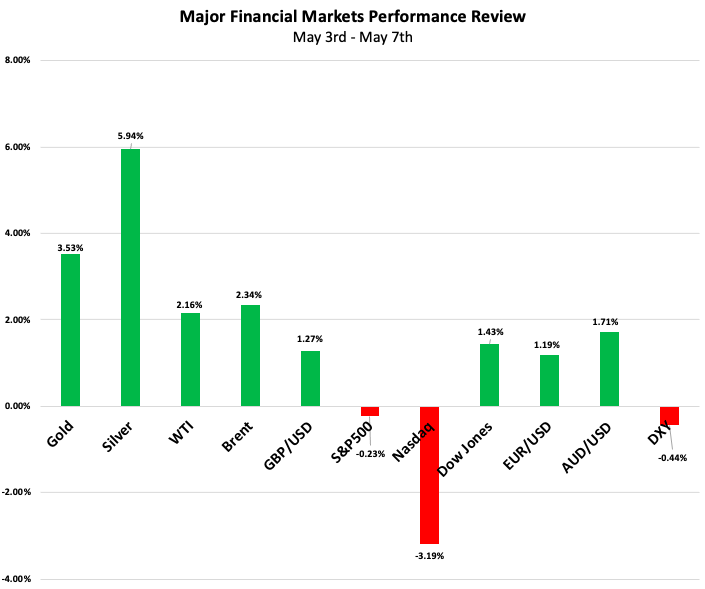 Last week, oil prices wobbled upward. Crude oil prices rose as the U.S. further loosened COVID-19 restrictions and the EU proposed opening its borders to vaccinated tourists. On top of that, U.S. API and EIA crude inventories recorded declines of 7.7 million barrels and 7.99 million barrels, much better than expected. U.S. crude and Brent crude rose to $66.73 per barrel and $69.92 per barrel after the data were released, the biggest increases since January. Still, worsening conditions for the COVID-19 pandemic in India, the world's third largest oil consumer, and an announcement by Japanese Prime Minister Shinzo Abe that the state of emergency due to the pandemic in Japan will be extended until May 31 sent oil prices falling back. At the close of last week, U.S. crude and Brent crude traded at $64.83 per barrel and $68.2 per barrel, up 2.16% and 2.34%, respectively. See WTI Oil Live Chart Below:

Crude oil prices could be sharply higher on the back of a more positive outlook on future oil demand as vaccination speeds up in some parts of the world. While the surge in global COVID-19 infections has raised doubts about the forecast for oil demand, the long-term outlook looks optimistic due to higher inflation expectations and a global economic recovery.

US dollar weakened whereas gold broke $1,800 per ounce

Gold jumped more than $30 to $1,798 an ounce early last week on inflation fears and weaker-than-expected U.S. economic data. But then came U.S. Treasury Secretary Janet Yellen, who conceded that interest rates may have to rise to keep a lid on the burgeoning growth of the U.S. economy brought on in part by trillions of dollars in government stimulus spending. Financial markets briefly wobbled after the comments, with gold heading as high as $1799 before a sudden, short-term plunge. Subsequently, the metal managed to break through the key $1800 resistance level and briefly stood above $1843, as Treasury yields continued to fall and the U.S. dollar tumbled. Gold ended the week at $1,831.12 an ounce and saw a weekly gain of 3.53%.  See gold price live chart below:

The U.S. Dollar Index (DXY), on the other hand, gave up some of the gains it had made on the positive U.S. GDP data earlier, briefly falling below 91. But the brief spike in Treasury yields helped push the DXY up to 91.398 before it suffered another setback on the disappointing non-farm payrolls data. Finally, the DXY ended the week at 90.896, down 0.44%. In the short term, the DXY may continue to come under pressure as the Fed continued its quantitative easing and the European economies played catch-up. But in the longer term, the dollar may be supported by expectations that the Fed will announce a slowdown in the pace of bond purchases in the fourth quarter as the U.S. economy recovers strongly.

Last week, the RBA upgraded its economic outlook and stressed that despite the strong recovery in economic activity, the recent CPI data confirmed that inflation pressures remain subdued, so the RBA was prepared to undertake further government bond purchases to help meet its goals of full employment and inflation. In the interest rate decision, the RBA kept its cash rate and three-year yield target unchanged at 0.10% and said the RBA’s Board would decide on a third tranche of quantitative easing and its bond-buying program at its July 6 meeting. AUD/USD fell sharply after the rate decision, briefly below 0.77. At the week's close, the AUD rose 1.71% to 0.78433 against the USD. And the Australian dollar, despite a recent run of weakness, is likely to remain bullish as global commodity prices, particularly iron ore prices, have surged. Additionally, RBA governor Philip Lowe had said the one area likely causing a headache is the property market as housing has surged by 7.8% over the past year in response to record low borrowing costs, government assistance and a lack of supply. Therefore, investors should pay attention to the HIA's New Home Sales report on Australia, which will be released this week.

At the start of the week, the three major U.S. stock indexes continued to fall from their previous record highs as soaring global commodity prices revived fears about inflation. Fed chair Jerome Powell reiterated that the U.S. economic recovery was "making real progress", but that the central bank was not considering cutting back on the asset purchases that have helped the economy recover from the pandemic. Investors have also been reassured by some Fed officials who said inflation is still under control. In terms of U.S. economic data, last week's PMI for manufacturing and services came in at 60.7 and 62.7 respectively, significantly lower than expected. Not only that, U.S. companies created only 266,000 jobs in April. But the U.S. stocks continued to record high. At last week's close, the S&P 500, Nasdaq and Dow were at 4,201.62, 13,632.84 and 34,548.53, respectively, down 0.23%, 3.19% and 1.43% for the week. See S&P500 chart below:

U.S. CPI and retail sales data are due out this week. Considering rising commodity prices, April’s CPI could reignite inflation fears and thereby lead to another bout of volatility in the U.S. stock market, after rising 2.6% in March from a year earlier, the biggest increase since 2018 helped by a strong economic recovery.

The BoE announced its interest rate decision and monetary policy last week. The central bank held interest rates at 0.1% and announced it would slow the pace of its weekly asset purchases to £3.4bn from its current £4.4bn, but stressed it would not fully reverse its stimulus programme. Meanwhile, it raised its forecast for British economic growth in 2021 to 7.25% from its previous forecast of 5.0%. Sterling fell more than 30 points against the dollar shortly after the decision was announced, but quickly recovered. Finally, the pound finished the week at 1.3989 against the dollar, up 1.27%. Separately, the PMI for British manufacturing released last week rose to 60.7 in April from 58.9 in March, the highest level since July 1994. This is certainly a positive signal for the UK's strong growth in the second quarter. Going forward, sterling is likely to be supported by accelerated vaccination in the UK, which will help the government fully open up the economy by June. This week, UK GDP figures will be released and are worth watching after Goldman Sachs raised its forecast for the UK economy in 2021 and predicted that the UK economy could grow faster than America.

Last One With recent unfavorable news,is gold and silver deep in trouble?
Next One U.S. stocks suffered a slump due to shocking CPI figures
Latest Release
Popular Reading