Will Gold be Stabilizing at 1,700 as Bulls Counterattack ? 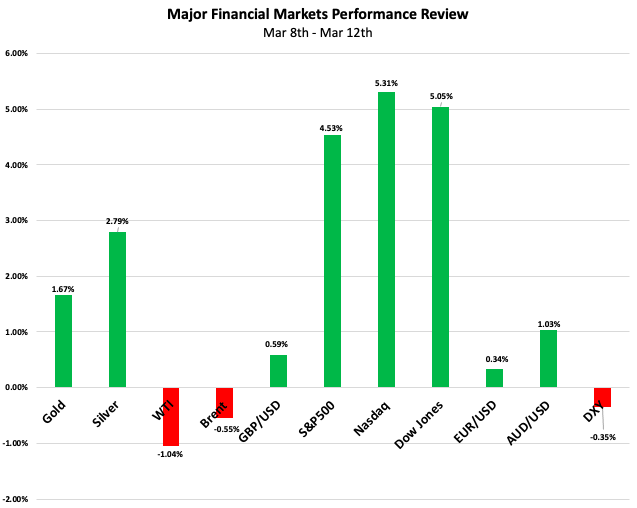 Last week, gold prices bottomed out, but they rebounded at 1676 and went on a 3-day winning streak after the bulls got some respite as steady demand for U.S. 3 - and 10-year Treasury bonds pushed yields back down. At last week's close, gold traded at $1726.96, up 1.67% for the week. See Gold Live Chart Below:

However, appetite for gold was waning, suggested by the fact that the SPDR Gold Trust (GLD), the world's largest gold ETF, has experienced sustained net capital outflows over the past few weeks. Despite the short-term rebound, gold could hit its mid-year lows as a gradual improvement in the global economy may keep prices weak. Separately, the U.S. Dollar Index briefly broke 92.5 last week, its highest level since late November, and then fell from its high as U.S. bond yields descended. At last week's close, it traded at 91.663, down 0.35% for the week. Going forward, the continued rise of U.S. inflation expectations may lead to the continued increase of U.S. bond yields, so the dollar, which has been talked down, may be boosted in the short term, although Joe Biden's "flood irrigation type of easing" becomes a resistance to the dollar's strength.

Volatility of crude oil intensified last week. Oil markets received a big shock early the week on news of an attack on a Saudi oil port that did not affect Saudi production, with U.S. crude and Brent crude hitting around $69 and $71 a barrel before falling back. Afterwards, both continued to fall as the dollar's strength offset gains from higher inflation in the crude oil market. In addition, last week saw an interlude in crude oil. Prices fell sharply because remarks by Russian Deputy Prime Minister Alexander Novak that Russia itself managed to increase output by 890,000 b/d from last May's level were wrongly quoted as the country would recover output by 890, 000 b/d since May 2021. This showed the power of OPEC+ members to announce an increase in oil prices. On the crude inventory front, API and EIA data recorded another increase of 12.792 MMbbl and 13.798 MMbbl last week, but continued sharp declines in gasoline and distillates were a positive sign for a recovery in crude oil demand. At last week's close, U.S. crude and Brent crude were at $65.57 and $69.17, respectively, down 1.04% and 0.55% for the week. However, there will be more volatility as oil prices gradually rise since all the positive news have seemingly been digested by oil prices.

Despite the strong rally in the Nasdaq, the market's unabated bearishness may signal a shift in strategy among U.S. stock investors, driven by economic cycles and stronger inflation expectations. On the economic front, the country’s CPI came in at 0.4, in line with market expectations, but inflation will pick up in the coming months as the stimulus package is implemented, national income is rising and businesses are reopening as a result of accelerated vaccination.

This week, U.S. retail sales figures will be released with high expectations, following a sharp improvement in the previous reading. Also, the Fed will release its monetary policy statement and interest rate decision, with comments on the current inflation and Treasury yields, so investors should pay attention to it.

The euro rose after the ECB increased its bond purchases

The euro fell early in the week against the dollar. Previously, Eurozone bond yields have risen sharply since the U.S. announced a massive stimulus package, heightening fears that Europe's economic recovery will be hampered by higher borrowing costs for government-funded companies in the future. Last week, EUR/USD subsequently turned higher as the dollar weakened and the ECB increased its bond-buying programme. The current pair then went higher to near 1.2 at one point after the market's fears were eased for now by the ECB's decision not to expand its 1.85 trillion euro ($2.2 trillion) emergency stimulus programme, but to increase its bond purchases in the next quarter. At last week's close, the euro traded at 1.19516 against the dollar, up 0.34% for the week.

In another piece of good news, the European Union approved the COVID-19 vaccine from Johnson & Johnson. However, the euro remained weak as Europe's economic recovery lagged behind that of the U.S. and U.K. Therefore, investors may pay attention to this week's European Union finance ministers' meeting, when members will give their views on the economic situation in Europe.

The Australian dollar bottomed out as risk-on sentiment rose

Last week, RBA governor Philip Lowe ruled out a rate rise any time soon, reiterating rates were unlikely to rise until at least 2024. Afterwards, the benchmark three-year bond yield fell as low a 0.087% as it briefly dipped below the RBA's 0.1% target for the first time this year. Nevertheless, AUD/USD remained an unchanged trend as US dollar fell. And the implementation of the stimulus package at the appointed time, which led to higher risk-on sentiment, was also an important factor in boosting it. By the end of the week, AUD/USD rose by 1.03% to 0.77569.

Last week's news that consumer inflation expectations rose 4.1% in March, beating expectations, suggested a strong economic recovery was under way. This week, the minutes of the RBA meeting and employment data will be released. The former includes a view on the inflation outlook, which is particularly important and could affect the Aussie, while the latter reflects the noteworthy Australian unemployment rate, which was at a high level of 6.4% in the previous data.