USD continued to fall, is gold waiting for a breakthrough?

Abstract: While the U.S. Dollar Index continued to decline, gold's upward trend hit a snag. The stimulus package fueled the rally in U.S. stocks. The EURO is rising, but will the ECB turn a blind eye? The pound was expected to move higher after the Brexit deal was finalized. Oil prices faced heavy headwinds after optimistic news was digested. 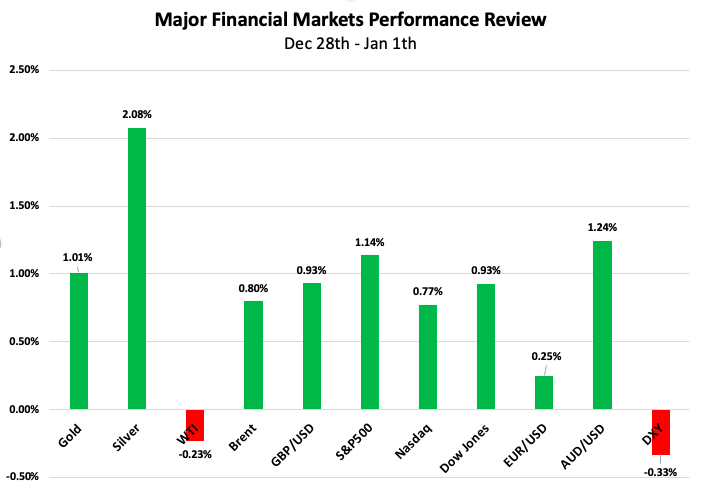 Post Contents [hide]
When will gold break through 1900 as the dollar continues to weaken?

Last week gold rallied to 1900, but still failed. At first, the metal broke above the $1,900 resistance and even its 100-day moving average last Monday after Trump signed into law a $2.3 trillion pandemic aid and spending package. But it quickly fell back and remained in a range between 1870 and 1885 as the package also provided a bit of a lift to risk asset markets. By last week’s close, gold was up 1.01% on the week at 1897.9. Against the dollar, the U.S. Dollar Index fell as low as 89.53, its lowest level since April 2018, on the back of the pandemic aid and spending package, and it declined by 0.33% to 89.923 at the close of last Friday.

Although the decline was somewhat weakened by the continuous deterioration of the COVID-19 pandemic and the mutation of the virus, cautious optimism on the COVID-19 fiscal stimulus package and positive vaccine news in the U.S. as well as the UK's approval of the Brexit deal has weighed on the dollar. Gold, by contrast, has regained ground in recent weeks, climbing from multi-month lows in late November, on the back of a badly needed coronavirus rescue package passed by the Congress and a weakening dollar. Considering the expectations of inflation and a weaker dollar, gold could gain some upside momentum.

U.S. stocks hit another record high after the passage of the stimulus package

Risk sentiment was boosted last week by the enactment of a stimulus package after five months of negotiations, sending U.S. stocks to another record high. However, the stocks fell sharply after Republicans rejected president Donald Trump's plan to increase the direct payment in the relief package to $2000. Three indexes rallied strongly as investors appeared to bet on more fiscal stimulus in the future, despite last week's discovery of the British strain in Colorado. At last week's close, the S&P 500, Nasdaq and Dow were up 1.14%, 0.77% and 0.93%, respectively, at 3732.04, 12870 and 30409.56.

U.S. manufacturing and services PMI data are due this week, and it will be interesting to see whether the pace of recovery is as strong as it was before the COVID-19 worsened.This week's headline non-farm payrolls data will also reflect America's employment. Meanwhile, a runoff election for the U.S. Senate is approaching, and the two parties are running neck-and-neck. The outcome is critical to the implementation of economic policy under Mr. Biden, so investors should pay attention to it.

Last week, the euro broke above 1.23 against the dollar for the first time since April 2018. Its rally was driven by:

1. The continuing decline of the dollar.

2. The EU and China have made a breakthrough on a comprehensive bilateral investment agreement. 3. The formal signing of the Brexit agreement reduces the uncertainty.

By the end of last week, the euro was trading at $1.22138, up 0.25 percent on the week. Although an EU-China trade agreement is imminent, it appears to have a negative impact on EU-US relations. Especially after Mr. Biden takes office, his attitude to international relations and the policies he will adopt remain unclear, which could become a worry for the EU. It is worth noting that a strengthening euro will hamper the ECB's expected inflation target, so the central bank may take steps to weaken the euro, which could weigh on the currency. With Eurozone CPI and retail sales data set to be released this week, a worsening virus and economic blockade may keep the Eurozone's recovery weak and stalled, so the economic problems may pose some downside risks to the euro.

After the Brexit deal was signed, the pound broke 1.36

Last week, the pound rallied last week after a trade deal between Britain and Europe was formally signed and the dollar continued to weaken. Despite the market's earlier apathy towards the Brexit deal, it has bolstered investor confidence in the pound. In addition, last week's approval by the UK drug regulator of an Oxford-Astrazeneca vaccine has been one of the key factors in pound's strength. At last week's close, GBP/USD was at 1.3674, up 0.93% for the week.

Although the Brexit deal has been implemented, the fair competition, fishing and sovereignty issues are far from perfect, which undoubtedly lays the groundwork for the trend of pound. Add to that the fact that the virus has strained the health care system in Britain, and Prime Minister Boris Johnson imposed tougher restrictions on much of the country and last week warned of a third lockdown. This could act as a headwind for pound gains. Therefore，investors should be wary of the volatility these factors bring.

At the start of last week, U.S. crude and Brent crude rose as high as $48.94 and $52 a barrel respectively on the positive impact of the stimulus package, attempting to hit all-time highs since oil prices plunged in April. However, the spread of the virus around the world and the mutation of the virus caused both oil prices to fall from their highs. Crude inventories reported by the API and the EIA recorded a big drop of 4.875 million barrels and 6.065 million barrels respectively, beating market expectations and driving crude prices sharply higher. At the close of last week, U.S. crude and Brent were trading at $48.18 and $51.7 a barrel, down 0.23% and 0.8%, respectively.

In addition, last week the Saudi Cabinet reviewed Saudi-Russia government committee meeting results, stressing its commitment to the cooperation pact among oil-producing countries and supporting the OPEC+ statement to maintain stability in the world oil market. Looking at the recent movements in the oil market, the short and long positions have been played out between optimism over continued vaccination and pessimism over the deteriorating virus. OPEC+'s plan to gradually increase output has weighed on crude prices, despite an increasingly tight economic blockade and continued lackluster demand for crude. Therefore, the trend of the crude oil may continue to maintain volatile.