Bitcoin has been resurrected and its aftermarket is expected to rise

Abstract: Wall Street revived Bitcoin after its pullback. Will the U.S. stocks continue to rise as Joe Biden is about to take office? Gold is caught in a bind as economic expectations are positive. Crude oil rose strongly, but worries remain in the aftermarket! Negative interest rates are being re-questioned, and consequently pound rises! 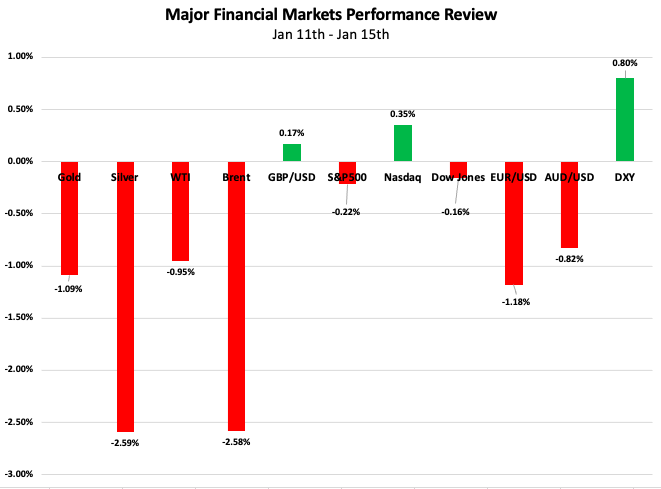 Post Contents [hide]
Could Bitcoin return to bull market after it dodged a bullet?

Last week saw a sharp pullback in the Bitcoin market. After hitting an all-time high of $42,000, the price of Bitcoin fell for three days in a row to $30,100 at one point, a drop of more than 25%. Needless to say, the crash has sparked fears among investors of a repeat of the Bitcoin bubble that burst in 2017. This fear seems to be justified by the fact that a look at the Bitcoin market in 2017 shows that the price of Bitcoin has fallen for 5 days in a row after hitting an all-time high, and now it looks like it's going to play out the same story. But unlike in 2017, this time Bitcoin has bounced back more strongly after a sharp fall, making traders more willing to buy. After the pullback, it broke through $40,000 again on Thursday and has since fluctuated below that level. Thus, the $40,000 level has become an important resistance level for Bitcoin. On top of that, Macro Opportunities Fund investor Scott Minered, who has said Bitcoin should rise above $400,000, re-expressed last week that Bitcoin's parabolic rise is unsustainable in the near term and it's time to take some money off the table. But there are always some investors who believe the Bitcoin market will become more mature as institutional investors turn to it. As a result, the 2017 slump may not be repeated for a while.

Last week, U.S. crude and Brent crude had another good week, topping $53.9 and $57.4 a barrel at one point, their highest levels since February last year. The main reasons for the surge include:

3. Expectations of a large-scale U.S. economic aid have been an important factor driving up commodity prices.

On top of that, a combination of Saudi Arabia's voluntary production cuts and vaccine distribution has continued the positive sentiment in the oil market. At last week's close, U.S. crude and Brent crude were at $52.11 and $54.8, respectively, down 0.95% and 2.58% for the week.

Last week's EIA/OPEC Energy Outlook gave a positive signal on demand, with EIA and OPEC forecasting that global consumption of petroleum and liquid fuels will increase 5.6 million and 5.9 million barrels per day (b/d) in 2021. However, the risks in the crude oil market remain significant:

1. OPEC+ group’s compliance with the oil production cuts fell to 75 percent in December 2020, one of the lowest levels since the pact was enacted in May 2020, according to market sources.

2. Extreme economic blockades in parts of the world and the continued discovery of mutated viruses have put pressure on demand for crude oil. Therefore, despite the almost linear rise in crude oil prices, there are still significant risks, and investors need to be alert to the risk of increased volatility.

The dollar index rebounded gradually, while gold market is struggling

Last week, gold remained in a tight range after a sharp fall, indicating a wait-and-see attitude among gold traders. And the sharp fall in U.S. bond yields did not give the gold market a boost. That may be due to the tug of war between support for gold from Biden's massive stimulus package and optimism about the global economy that is weighing on bullion bulls, pushing investors from the positive to the sidelines. In addition, the massive stimulus means the U.S. government will issue more bonds, and the oversupply of bonds will push Treasury yields higher, so gold could again be caught in a dilemma. At last week's close, the metal was at 1,827.64, down 1.09% for the week.  See gold live-chart below:

The dollar index rebounded to 90.7 last Monday on the back of higher Treasury yields. But the dollar's recovery was stymied later by strong demand for $38 billion in new 10-year Treasury notes, which pushed yields lower. Yields continued to fall and Biden released a $1.9 trillion economic recovery plan was made public, but the market was already pricing in it because most of its details had been disclosed in advance of Biden's release. As a result, the dollar index did not show dramatic fluctuations, holding steady at the 90 level. By the end of the week, the dollar index was at 90.784, up 0.8% for the week. Fundamentally, the bearish factors for the dollar index are still there. Last week, Fed officials said the central bank won't raise interest rates unless they see troubling signs of inflation. The massive stimulus package after Biden takes office may hit the dollar in the long run. Thus, the upside of the dollar remains difficult.

Will the larger-scale economic stimulus bring the U.S. stock back to its peak?

The U.S. stock's upward march stalled last week. Mr Biden took over the White House after the U.S. political landscape was once again in turmoil, with the House of Representatives voting to impeach Mr Trump for a second time, fuelling panic on the U.S. stock market. And the rise in U.S. bond yields have also become an important factor under pressure on the US stock market. As of last week's close, the S&P 500, Nasdaq and Dow were at 3795.54, 13112.64 and 30991.52, respectively. For the week, the S&P 500 and Dow were down 0.22% and 0.16%, respectively, while the Nasdaq was up 0.35%. See S&P 500 live-chart below:

On the U.S. economy front, the core CPI released last week showed that the weak job market and continued weak demand kept inflation in check. The report also noted that inflation remains well below the Fed's target. And the Fed made it clear last week that it won't raise interest rates anytime soon and isn't tapering its bond purchases. What's more, the U.S. job market continues to take a beating, when the COVID-19 pandemic is wreaking havoc in America. The number of Americans filing new claims for jobless benefits rose to 965,000 last week, the biggest increase since last March. At the same time, hiring has shown signs of slowing as a result of the restrictions imposed by the pandemic. Although vaccine distribution has begun and the massive financial aid has been announced, the uncontrollable virus could threaten the prospects of America's economic recovery. It will be interesting to see how the markets react to Biden's inauguration this week. With the economy and employment in the doldrums, investors should also focus on whether Congress makes any progress on the massive stimulus package.

The pound fluctuated upward last week. Bank of England (BoE) Governor Andrew Bailey said last Tuesday there were "lots of issues" with cutting interest rates below zero, surely dashing expectations of such a move. Investors had expected the BoE to introduce negative interest rates as early as May, so they also appeared to have pare back their bets that the bank would cut rates below zero in the coming months after Mr Bailey's comments. As a result, sterling briefly rose to 1.37 against the dollar last week, its best level in nearly two and a half years. At last week's close, sterling traded at 1.3586, up 0.17%. In addition, strong vaccination performance in the UK, ahead of other major developed countries, also kept the market bullish on sterling. Meanwhile, analysts at Credit Suisse pointed out that sterling is actually still undervalued against the dollar relative to its fair value. As long as the UK economy recovers strongly as expected, sterling will strengthen further. Still, investors need to keep an eye on the potential for sterling to be hit by a stronger dollar, the impact of the pandemic and the legacy of Brexit. This week, UK CPI and retail sales figures are due to be released, and with the UK under a tight economic embargo, the data may be gloomy.

Last One With recent unfavorable news,is gold and silver deep in trouble?
Next One U.S. stocks rallied after Joe Biden moved to the White House
Latest Release
Popular Reading