Risk-taking Mood Soars: will the downward trend continue for gold?

Abstract: Economic data showed positive and made it difficult to reverse gold's decline. As the energy crisis deepened, oil prices stumbled on the way up. U.S. bond yields soared, and will U.S. stocks be blocked on the upside? GBP/USD break above 1.4 as the economic outlook brightened. AUD is likely to shake off bearish trend after jobs data beat expectations. 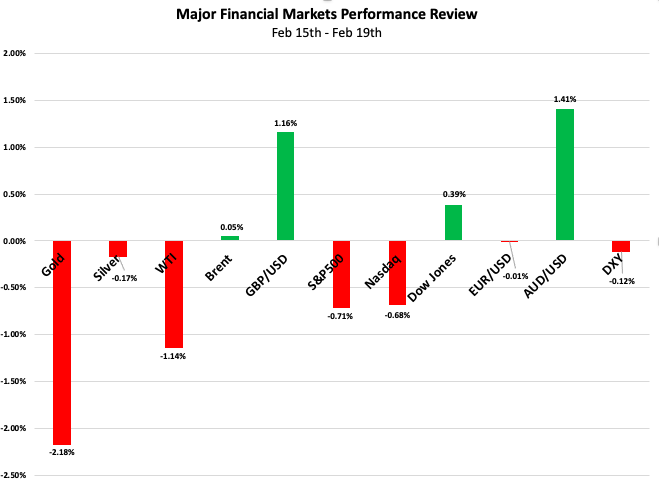 Gold continued its slide last week, briefly breaching 1,770, its lowest level in nearly two and a half months. The reasons for the decline include:

1. Gold has been hurt by a flood of capital into risk assets as a result of improving risk-on sentiment.

2. The global economy is recovering steadily, and consequently the demand for safe haven assets has weakened.

3. The sharp rise in Treasury yields has strengthened the safe-haven dollar and made gold less attractive.

Going forward, the gold market may remain weak. On the one hand, as the large-scale stimulus package has boosted reflation expectations, Treasury yields have moved higher and become a major headwind for gold. On the other hand, for the market as a whole, demand for gold is likely to remain weak. At last week's close, gold was at 1783.35, down 2.18% for the week. See live gold price chart below:

On the dollar, the U.S. Treasury bond yields rose on the back of the better-than-expected U.S. retail sales data, prompting the U.S. Dollar Index (DXY) to rise above 91 before falling back. At last week's close, DXY was at 90.34, down 0.12% for the week. Looking ahead, the Fed may maintain its quantitative easing, which will undoubtedly weigh on the dollar in the long term, although the strengthening of Treasury yields has supported the dollar in the short term.

Crude oil prices soared last week. US crude and Brent crude rose sharply due to a cold wave in the United States, briefly breaking the US $60 / BBL and US $62 / BBL, the highest levels since January last year. In addition, the cold wave caused API and EIA crude inventories to drop 5.8 million barrels and 7.3 million barrels, respectively, sending crude prices higher, with U.S. crude trading at $62 / BBL and Brent at $65 / BBL. However, oil prices did not benefit much from the cold wave that keeps U.S. refineries closed for another week, cutting into crude supplies. Instead, they fell sharply because Saudi Arabia planned to boost production when prices recover. At the end of last week, U.S. crude and Brent crude were trading at $58.93 / BBL and $62.67 / BBL, respectively, with U.S. crude down 1.14% and Brent up 0.05% for the week. See live WTI oil price chart below:

More recently, JPMorgan Chase and Goldman Sachs have been bullish on crude, boosting the bullish sentiment. In addition, an improved vaccination rate in the United States, the world's largest economy, and a decline in cases and hospitalizations of COVID-19 have been key factors supporting the upward trend in crude oil prices. Going forward, other factors such as a global economic recovery on track and effective containment of the pandemic will support oil prices in the long term. But in the short term, the fact that OPEC+ may gradually ease production cuts due to high prices could weigh on oil prices.

U.S. stocks were down on disappointing jobs data

In terms of economic data, last week's U.S. retail sales data rose 5.3% in January, well above market expectations of 1.2% and the highest reading in nearly seven months. Many see this as a direct sign of the need to expand the stimulus package, since the $600 direct payment for every individual has made a significant contribution to the U.S. economy. As for the larger $1.9 trillion economic stimulus package, House Democrats said they were finalizing its details and were preparing for a vote on the final bill by the end of the week.

This week, US GDP figures will be released, which grew by 4% in the fourth quarter of last year but it was still below market expectations of 4.3%. It will be interesting to see if the figures can be improved after the U.S. full-year GDP fell by 3.5% in 2020, the worst performance since World War II.

GBP hit its highest level against the dollar in nearly three years last week. In Britain, inflation unexpectedly rose to 0.7%, moving closer to the BoE's 2% target. Meanwhile, the BoE said inflation would rise this year, helped by higher energy prices and the expiration in April of a sales tax cut for the hospitality sector. Moreover, thanks to the introduction of vaccination programmes, businesses are about to reopen, consumer confidence is improving and the economy is likely to recover quickly. But last week BoE policymaker Michael Saunders said there were risks to the recovery and the jobs market, and some members said they would add negative interest rates to their toolkit from August. But GBP broke above 1.4 against the dollar for the first time since 2018 as the UK's rapid vaccination progress offset market uncertainty over the negative interest rates. By the end of the week, GBP/USD was at $1.4008, up 1.16% on the week. This week, UK unemployment figures are due to be released, following a five-year high of 5% in the three months to November. The data will give a guide to how the UK jobs recovery is faring.

Last week, AUD/USD traded in a tight range after surging higher and falling back. Minutes of the RBA monetary policy meetings showed the economy would need "very significant" monetary support to meet its employment and inflation targets, and said that despite a V-shaped recovery, an exit from quantitative easing was not currently under consideration. AUD/USD briefly approached a monthly high of 0.7805 after the minutes were released and then fell. It subsequently edged higher after the Australian unemployment rate fell to 6.4% from 6.6% in January, slightly better than market expectations of 6.5%. By the end of the week, AUD/USD was at 0.78676, up 1.41% for the week. While macro market sentiment and higher commodity prices have helped buoy the Australian dollar, it is worth noting that the Australian government's employment subsidy program will end at the end of March, and how businesses and households will respond to the impact of a tightening monetary policy will be an uncertain factor for the economy recovery. So investors should keep an eye on the Australian dollar.