Abstract: The Australian dollar has hit a two-year high as the economy is recovering. The Fed decision and the stimulus package cheered U.S. stocks. The U.S. dollar continued to weaken, while gold and Bitcoin rose rapidly. Oil prices were buoyant, while demand remains a concern. The pound may be in turmoil as Brexit hit another snags. 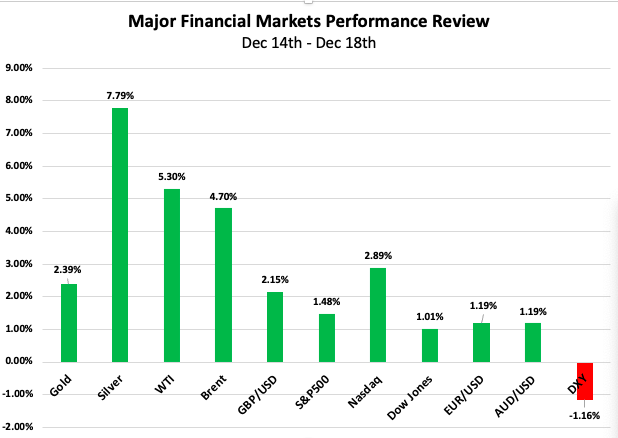 A slew of economic data released last week pointed to the strong recovery of Australia economy. In November, PMI for Australia's manufacturing and services sectors were 56 and 57.4 respectively, both higher than previous readings and showing significant expansion. Last week's unemployment figures confirmed that the pandemic has been contained and that large-scale monetary and fiscal policies have worked in the country. The unemployment rate stood at 6.8 percent in November, down from 7% in October. In spite of the recent deterioration in relations between Australia and China, economic data from China last week - its total retail sales of consumer goods increased by 5% year-on-year, 0.7 percentage point faster than that of the previous month - provided some fuel for the Australian dollar's rise. All the above positive news and a weaker dollar paved the way for the Australian dollar to rise. At last week’s close, AUD/USD traded at 0.7623, up 1.19%. See AUD/USD live chart below:

Besides, commodity prices are likely to rise due to the upswing in risk-on sentiment and the expectations of higher inflation could. Helped by this, the Australian dollar's rise may continue. But the continued deterioration of relations between Australia and China may lead to greater volatility in the Australian dollar in the short term. Investors should keep an eye on this week's Australian retail sales data and trade book data as they can learn more about the state of Australia's economic recovery and the impact of Australia-China relations on the economy.

U.S. stocks hit another high as markets bet on the stimulus package

Early last week, U.S. stocks opened higher as the US green lighted Pfizer's vaccine. Later, the soaring number of virus infections and uncertainty over the stimulus package sent U.S. stocks sharply lower. Since then, negotiations on the stimulus package accelerated in an effort to avert a government shutdown, with the House and Senate leaders indicating progress, and congressional negotiators saying they are closing in on a $900 billion COVID-19 economic relief package. In addition, good news has been coming in about the vaccine development. The FDA says Pfizer vaccine vials, for example, hold extra doses, and will expand supply. As a result, optimism about the stimulus package and the good vaccine news have sent the stock market into a state of euphoria. At last week's close, the S&P 500, Nasdaq and Dow were up 1.48%, 2.89% and 1.01%, respectively, for the week at 3722.48, 12764.74 and 30303.37. See Nasdaq100 live chart below:

Despite the soaring market, the employment in the United States continues to deteriorate. The number of Americans applying for unemployment benefits rose to 885,000 in the week to December 12, the highest weekly total in past three months. U.S. retail sales fell by 1.1% in November, the second straight monthly decline, according to data released last week. To be sure, the combination of rising unemployment and weak economic data is further evidence that the pace of recovery is slowing. However, last week's "dovish" sound of the Fed continuing to strongly support the recovery more or less offset the market's concerns about the economy. This week, U.S. GDP data will be released, and it will be interesting to see if the U.S. economy is seriously affected by the worsening of the pandemic.

The price of crude oil broke its usual rollercoaster ride last week and climbed firmly. The American Petroleum Institute (API) crude stocks rose 19.93 million barrels last week, and while the U.S. Energy Information Administration (EIA) reported a drop of 3.1 million barrels, still below market expectations for a 3.5 million barrel decline. The weaker-than-expected inventory data did not stop crude prices from rising as confidence about a recovery in future demand for crude oil returned with the approval of Pfizer's vaccine by drug regulators. U.S. crude and Brent crude rose for the fifth straight week to close at $49.03 and $52.3, respectively, up 5.3% and 4.7% for the week. Despite the strong rally in oil prices, the world's three largest oil agencies - the International Energy Agency, the EIA and OPEC - all downgraded their outlook for global oil demand through 2021 in their latest monthly reports. Moreover, as challenges in vaccine supply and distribution surface, enthusiasm for crude oil, which had been boosted by large-scale vaccinations, may be ebbing, along with recent increases in crude oil inventories, also putting pressure on the upward path. As a result, the crude oil market could face short-term volatility as the vaccine will not be able to address the immediate COVID-19 outbreak any time soon. Investors should watch with caution.

The dollar resumed its decline, while gold and Bitcoin rose

Gold and Bitcoin was bustling with life last week as the dollar continued to tumble on the back of "dovish" comments from the Fed and the looming stimulus package. On top of that, the nine months of still inconclusive negotiations over Brexit have also been an important factor investors are turning to safe-haven gold. The Fed last week pledged that it would continue to buy at least $120 billion of debt a month until it sees “substantial progress” on reaching the Committee’s maximum employment and stable 2% inflation. Gold tumbled by $6 after the Fed's decision, but comments by Fed Chairman Jerome Powell helped push the metal higher, briefly pushing it above $1,860 an ounce. The U.S. Dollar Index slipped below 90 for the first time since April 2018, as the likelihood of a bipartisan deal on a new stimulus package increased. As the dollar fell against a basket of currencies, gold broke $1,900 an ounce. At last week's close, gold was trading at $1,881.4 an ounce, up 2.39% for the week.

Not only that, the so-called "digital gold" Bitcoin has blown past the $20,000 mark last week and briefly rose to $23,000. Last week's announcement that CME Group, the world's leading and most diverse derivatives marketplace, intended to launch Ether futures starting February 8, 2021 was one of the main reasons for Bitcoin's continued surge. The weakening dollar also prompted traders to increase their holdings of Bitcoin as a hedge against inflation. Going forward, as the unprecedented quantitative easing has created conditions for Bitcoin, its bullish sentiment has risen sharply, with strong price momentum, but investors still need to be alert to the risk of a sharp drop in its highs.

The pound has suffered a setback after the Brexit stalemate

The pound rallied last week on news of the Brexit negotiations. It hit a near two-year high above $1.36 against the dollar on positive signals from Brexit negotiations and continued quantitative easing by the Bank of England. The bank said it would maintain the size of its quantitative easing program at £895 billion, in line with market expectations. It also said the pound could fall if  EU-UK trade talks failed to reach a deal. Sterling's fall against the dollar on Friday confirmed this. On Friday, British and European leaders played down expectations of a deal, saying time was running out and that fishing was still the key to blocking a deal, sending the pound from rising to falling against the dollar. At last week’s close, GBP/USD was at 1.3515, up 2.15% for the week.

In addition, Britain's unemployment rate fell again as a result of the strict economic embargo. The figure stood at 4.9% between August and October, its highest level since 2016. In the future, if a Brexit deal is not reached, the UK economy will be hit hard and the downside risks to sterling may increase. No new deadline has been set for the negotiations, but the EU-UK Joint Committee agreed to implement the Withdrawal Agreement from January 1, 2021, which could mean December 31, 2020 as the final deadline for exiting the EU. Therefore, investors should continue to pay attention to the Brexit negotiations and accordingly adjust their investment strategies in a timely manner.

Last One With recent unfavorable news,is gold and silver deep in trouble?
Next One COVID-19 crisis escalated into another storm in the oil market
Latest Release
Popular Reading