■ Inflation pressures were rising and the euro slipped.
■ Can sterling regain support after the Fed's hawkish signal? 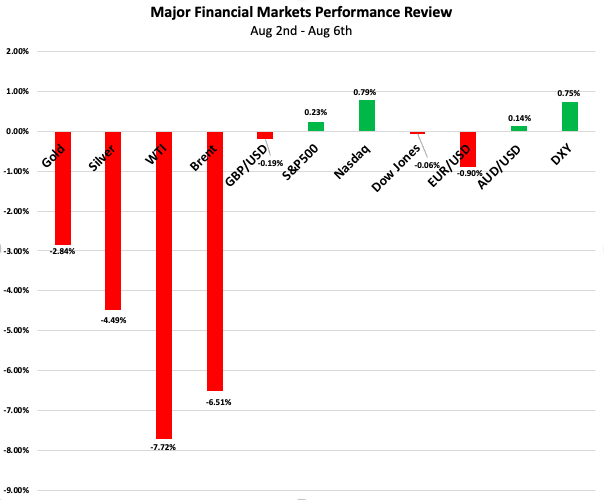 Crude oil prices fell again last week as the spreading of the Delta variant raised concerns about the outlook for oil demand. The United States, Britain and Israel accused Iran of carrying out a deadly drone attack on a tanker off the Coast of Oman in the Arabian Sea, but the worsening Delta variant offset its negative impact on oil markets. As one of the key factors behind the fall in crude prices, China's renewed travel restrictions amid a surge in new virus cases across much of Asia stoked fears that fuel demand in the world's largest crude importer could be hit. On top of that, API crude inventories fell by only 879,000 barrels in the week ended July 30, while EIA crude inventories unexpectedly rose by 3.626 million barrels, much lower than market expectations. After the data were released, U.S. crude and Brent crude slipped, ending last week at $67.97 / barrel and $70.27 / barrel respectively, down 7.72% and 6.51% in the week. See the U.S. crude price live chart below:

Going forward, uncertainties such as the Delta variant and negotiations between Iran and other major powers will dominate the short-term volatility of oil prices.

Gold remained in a narrow range as the market awaited U.S. non-farm payrolls data at the beginning of last week. But the weaker-than-expected U.S. PMI and ADP National Employment Report pushed gold back to its previous high of $1,830 an ounce. Afterwards, U.S. Treasury yields jumped and gold plunged by nearly $50 to $1,758 an ounce on comments from Fed Vice Chairman Richard Clarida that the Fed was on track to raise interest rates in 2023 and taper its bond purchases later this year, as well as on the strong non-farm payrolls data. At the close of last week, gold traded at $1762.2 an ounce, down 2.84% in the week. See gold price live chart below:

On the dollar front, it was a volatile week for the currency. The U.S. dollar index fell to 91.87 on the disappointing economic and employment data, but rebounded to above 92 after Fed officials sounded hawkish and upbeat about the economic outlook. At the close of last week, the U.S. dollar index was at 92.779, up 0.75% for the week. While the dollar had declined after the Fed's dovish stance at the policy meetings, it has been supported by a timeline for quantitative easing tightening that many Fed officials clarified recently. However, a short-term blow to the U.S. economic recovery from the virus and positive progress on the U.S. infrastructure bill could potentially weigh on the dollar.

U.S. stocks were volatile last week as continued declines in U.S. Treasury yields stoked concerns about the economic outlook. Moreover, the disappointing economic data seemed to reflect the roadblocks to the current recovery. July manufacturing PMI released last week slowed for the second month in a row to 59.1 as shortages of raw materials persisted. However, as the U.S. economy reopened, the services PMI hit another record high of 64.1. Separately, the impact of Delta variant on areas with low vaccination rates could limit the expansion of services, despite the relatively high vaccine effectiveness and vaccination rates in the country. Last week's non-farm payrolls data showed a jump of 943,000 jobs in July and a drop in the unemployment rate to 5.4%, which was much better than expected. As a result, U.S. stocks recorded high. Finally, the S&P 500 and NASDAQ ended the week at 4,429.1 and 14,895.12, up 0.23% and 0.79%, respectively, whilst the Dow Jones index fell by 0.06% to 35064.25. This week, the U.S. CPI for July will due out, after the previous reading rose by 5.4% from a year earlier, the biggest one-month increase since August 2008. While the Fed has repeatedly stressed that inflation is transitory, it expected higher inflation to last longer than expected. Therefore, considering the hawkish stance of many Fed officials, a sustained uptick in the data could lead to more volatility in U.S. stocks due to uncertainty about the monetary policy.

June's retail sales in the Eurozone released last week rose by 1.5% from the previous month and 5% from a year earlier, in line with market expectations. The euro hit an earlier high of $1.19 after the data. Eurozone's PMI also released in the week showed a rise to 60.2 in July from 59.5, the highest level since June 2006, as economic restrictions in the region were lifted and vaccinations accelerated. Still, factors such as supply chain bottlenecks and labor shortages could cause production costs to soar and keep Eurozone inflation rising in the short term. Previously, the euro dropped as expectations of a more hawkish stance from the ECB came after the European Union reported that Eurozone inflation exceeded the ECB's 2% target in July. At the close of last week, the euro was at $1.1761, down 0.9% on the week. In the past weeks, the highly contagious virus variant has led to a sharp rise in infections in many European countries, adding to uncertainty about the economic recovery and dampening market optimism. As a result, the euro is likely to be more volatile.

Sterling was briefly supported by the hawkish stance

Last week, the BOE released its interest rate and monetary policy statement. At the BOE meeting, the BOE reversed its previous dovish stance and signaled that it was concerned about current inflation. BOE Governor Andrew Bailey said they expected UK annual price growth to be higher than previously thought and hit a decade high of 4%, so "some modest tightening" would be needed to reach the bank's 2% target in the medium term. After the meeting, short-term sterling went up by nearly 40 points against the dollar. At the close of last week, GBP/USD traded at 1.3871, down 0.19% on the week. On top of that, UK’s manufacturing PMI fell to 60.4 in July from 63.9 as the worsening pandemic caused labor shortages and supply chain problems. But a survey of UK manufacturers showed that they remained upbeat about the outlook for the economy in July, with 63% forecasting a further rise in output next year. Britain's GDP will be released this week. In its monetary statement, the central bank estimated GDP growth at 5% in the second quarter, slightly higher than in its May report. Therefore, investors should watch whether the data improves as scheduled.