EUR rebounded from a dip as a strong economic recovery

Abstract: Could euro bulls regain momentum on a positive economic outlook? Gold rallied strongly, despite the signal that the Fed will scale back QE this year. Oil prices snapped a seven-day losing streak as pessimism vanished. U.S. stocks retreat from records amid political turmoil. Is Bitcoin's surge to the $50,000 mark a sign of strong upward momentum? 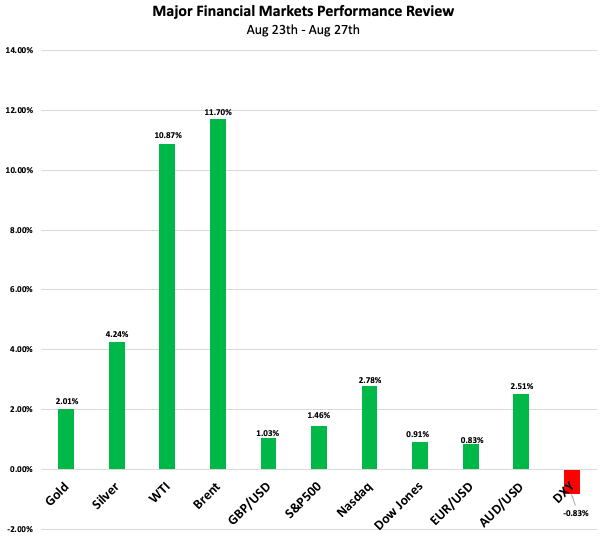 Last week, crude oil prices rebounded from a seven-day losing streak. On the one hand, investors' pessimistic outlook for oil demand changed as the spread of the virus in China, the world's largest crude oil importer, has been contained and Pfizer's vaccine gained full FDA approval. On the other hand, oil prices were pushed higher by a fire at a Mexican offshore oil platform that disrupted production and slashed output. On top of that, API and EIA crude oil inventory data recorded sharp declines of 1.622 million barrels and 2.979 million barrels, including a 2.2 million barrel slump in EIA gasoline inventories, suggesting continued demand for gasoline boosted the market sentiment despite the end of the summer travel season. After the data were released, U.S. crude and Brent crude settled above $68.51 a barrel and $72.4 a barrel, recovering almost all of their losses, and they closed the week at $68.65 a barrel and $72.56 a barrel respectively, up 10.87% and 11.70%. See Brent oil price live chart below:

The OPEC+ ministerial meeting will be held this week. After the White House urged OPEC to increase production to combat rising gasoline prices, the ministers' views on the outlook for supply/demand and the production increase will add to the price volatility.

Gold ranged for both bulls and bears as markets were divided over whether Fed Chair Jerome Powell would change his hawkish attitude towards the bond-buying taper timeline at Jackson Hole Economic Policy Symposium due to the spread of the virus. Nonetheless, the metal broke out of its previous sideways move early last week, vaulting over the $1,800 level and briefly topping $1,809 an ounce. As of last week's close, gold traded at $1,816.52 an ounce, up 2.01% for the week. See gold price live chart below:

On the other hand, improved risk appetite pushed the U.S. dollar index back from a nearly nine-month high of 93.7 as the approval of Pfizer's COVID-19 vaccine by the FDA could lead to a further acceleration in vaccination. But Dallas, St. Louis and Kansas Fed presidents urged swift action to slow the pace of asset purchases ahead of the annual Jackson Hole Economic Policy Symposium, together with political tensions in Afghanistan, supporting the U.S. dollar index back above 93. As of last week's close, the U.S. dollar index was 92.681, down 0.83% for the week. While Mr Powell made clear at the symposium that it would be appropriate to tighten quantitative easing this year, the lack of a clear timeline weighed on the dollar. Therefore, the dollar may be more volatile in the short term.

Bitcoin bounced back above the 50,000 mark

Despite selling off from an all-time high of $64,000 in April and briefly falling below $30,000, Bitcoin prices have risen steadily since mid-July and last week hit the $50,000 mark, their highest level in nearly three months. Among the main factors contributing to the strong rebound, Coinbase announced it would buy $500 million of cryptocurrencies on its balance sheet and allocate 10% of its quarterly profits to its cryptocurrency portfolio. Not only that, PayPal also said it would launch a service to buy, hold and sell digital currencies in the UK, marking an international expansion of the service since it was first launched in the US last October. Separately, the latest data from blockchain company Chainalysis showed a steady increase in purchases by accounts holding around $50 million or more worth of bitcoins since the end of June, according to CNBC, suggesting that the current rally in bitcoin prices has some large investors looking to add to their positions. While the growing adoption of cryptocurrencies and the return of large investors fueled trader enthusiasm, the multiple failures of bitcoin bulls to reach the $50,000 mark last week could dampen optimism in the short term.

Last week, ECB Vice President Luis de Guindos said the central bank was likely to raise its macroeconomic forecasts for the Eurozone again in September, despite the latest report of strong growth in the third quarter. ECB chief economist Philip Lane noted that the spreading Delta variant might have only a limited impact on the Eurozone economy, which remains on course for robust growth this year and next. On top of that, the Eurozone's manufacturing and services PMI came in slightly below market expectations at 61.5 and 59.7, suggesting a slowing pace of regional economic expansion. Nonetheless, the euro rallied strongly against the dollar last week, buoyed by optimism about the regional economy and a weaker dollar. As of last week's close, EUR/USD was at 1.17924, up 0.83% for the week. This week, the Eurozone CPI is due out, after a previous figure showed a 2.2 year-on-year increase in July, the fastest pace since October 2018 and above the ECB's 2% target. Therefore, investors should watch for whether this data can push a shift in the ECB's monetary policy stance.

Last week, the approval of the COVID-19 vaccine that helped expand vaccination coverage, coupled with support from the fiscal and monetary policies, lifted market sentiment and pushed U.S. stocks to new highs, despite the continued spreading of the virus in the United States. But stocks retreated as U.S. President Joe Biden vowed to avenge the deaths of Americans killed in  the deadly bomb attack at the Kabul airport, further raising tensions in Afghanistan. As of last week's close, the S&P 500, NASDAQ and Dow were at 4,470, 14,945.81 and 35,213.12 respectively, up 1.46%, 2.78% and 0.91% for the week. On the economic and employment front, the U.S. Department of Commerce revised GDP for the second quarter from 6.5% to 6.6%, indicating steadily economic growth amid the worsening of the virus. While the number of Americans filing new claims for jobless benefits rose slightly to 353,000 last week, it remained near the lowest level since the COVID-19 outbreak. This week, the U.S. non-farm data for August are due out, after the previous figure showed non-farm payrolls surged by 943,000 while the unemployment rate fell to 5.4%. If the data continue to improve, it would be a step closer to the Fed announcing the start of tapering. Hence, investors should pay attention to the data.