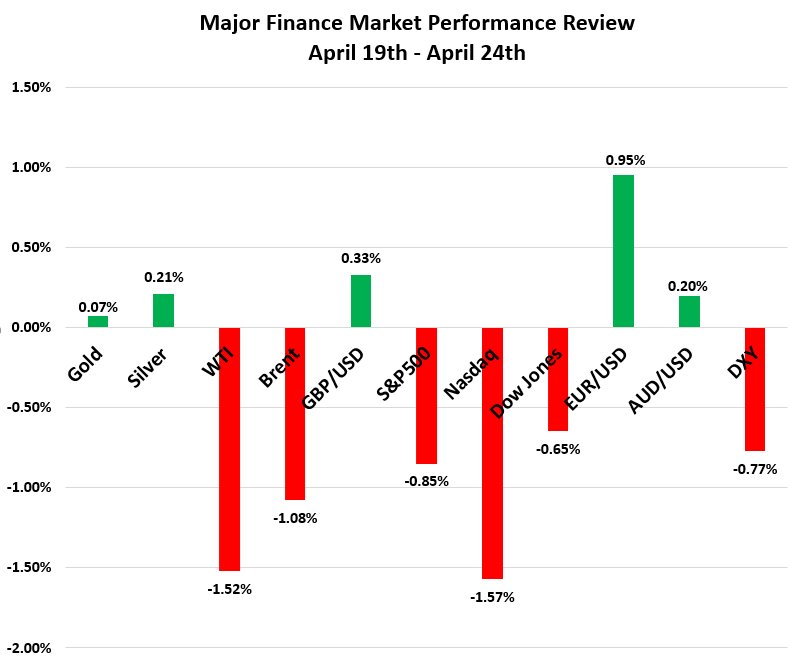 Last week, crude oil prices got wrapped up in a downward trend by the new wave of the COVID-19 pandemic in big oil consumers and an unexpected increase in U.S. crude inventories. The big consumer India, for example, has seen record numbers of new infections, making itself the third most affected country after the United States and Brazil. Japan's government declared a new state of emergency for several areas, including Tokyo, as new COVID-19 cases surge. The spread of the virus in these parts of the world has led to renewed investor concerns about demand for oil. Not only that, crude prices fell further after major progress in the talks between the U.S. and Iran. Then the VIX briefly rose more than 10% after the U.S. House of Representatives labeled OPEC a monopoly for cutting production and driving up crude prices, and thus the cartel could face lawsuits. U.S. API and EIA inventory data, on the other hand, recorded an unexpected surge of 436,000 barrels and 594,000 barrels last week, well below expectations. As a result, U.S. crude and Brent crude plummeted after the data and ended the week at $62.11 and $65.98, respectively, down 1.52% and 1.08%. See Brent oil live chart below:

This week, investors should keep an eye on whether OPEC+, which surprised the market at their last meeting by agreeing to gradually reduce record production cuts, will make any significant change at the upcoming ministerial meeting.

Gold extended gains last week to $1,797.7 an ounce, its highest level in nearly two months, as bond yields dropped and the dollar continued to depreciate. Demand for safe-haven assets was bolstered by news that China would increase gold imports and the onslaught of the COVID-19 virus in parts of the world, which dented hopes of a strong economic recovery. But as the dollar bottomed out, gold took a tumble, briefly falling below $1,780 an ounce, and closed the week at $1,777.1 an ounce, up 0.07%. Also, Treasury auctions are worth watching, with the metal's move likely to be closely tied to Treasury yields in the short term. See Gold live chart below:

The U.S. Dollar Index (DXY), on the other hand, continued its decline last week. While an earlier surge in Treasury yields triggered by inflation fears forced many hedge funds to capitulate on their short-dollar bets, the failure of strong U.S. economic data to push yields higher has undermined the most important factor supporting the dollar. As a result, the DXY fell below 91, its lowest level in nearly a month, and ended last week at 90.832, down 0.77%. From the technical analysis point of view, the DXY is currently in a clear downtrend and any rebound may depend on a break above 90.5.

At the start of the week, the bulls continued to charge as business reopened and the economic outlook improved, with sterling briefly trading above $1.4. But the pound had not benefited from continued dollar weakness as investor confidence increased amid a strong global economic recovery. Instead, it fell quickly, by 1.3% at one point, after breaking through the 1.4000 mark as India's record-breaking new COVID-19 cases and Japan's tightening of pandemic restrictions sparked a cautious mode among investors. At the week's close, sterling rose by 0.33% to 1.3876 against the dollar.

On top of that, UK employment data provided a pleasant surprise for the market. The unemployment rate unexpectedly fell from 5% to 4.9% in the three months between December 2020 and February 2021, although the UK was in an economic blockade until April, the data showed. Inflation edged up to 0.7% and core inflation rose to 1.1% in March, suggesting that commodity prices are heading up as the economy is recovering from the COVID-19 pandemic. The upbeat data, however, was not fully reflected by sterling, and GBP/USD bears have established dominance over bulls. But the pullback may prove temporary since the UK economic recovery is gaining strength.

U.S. stocks retreated from its all-time high last week. A surge in COVID-19 infections around the world has revived concerns about the continued negative economic impact of the pandemic, and the start of earnings season made investors more cautious. Although a number of companies have reported positive results, the market is skeptical about their ability to cope with the coming inflation. Later on the strength of inflation expectations, the S&P 500 rebounded strongly after a sharp fall, with raw-material, energy and financial sectors leading the charge. But U.S. stocks took a beating after President Joe Biden proposed nearly doubling the capital gains taxes for those earning more than $1 million a year. At last week's close, the S&P 500, Nasdaq and Dow traded at 4,134.98, 13,818.41 and 33,815.9, respectively, down 0.85%, 1.57% and 0.65%. See S&P500 live chart below:

On the economic front, the number of Americans filing new claims for jobless benefits fell to 547,000 last week, the lowest level in nearly 13 months, in a further sign that the labor market and the economy are experiencing strengthening recovery. Investors should look to the Fed's interest rate decision and monetary statement this week for any sign of a shift from its dovish stance where it believed it can deal with the inflation.

EUR/USD initially pulled strongly last week, successfully breaking above 1.2000, on the back of accelerated vaccination in Europe and a weaker dollar, before remaining in a tight range. In the week's decision, the ECB opted to leave its Pandemic Emergency Purchase Program or PEPP at €1.85tn ($2.23 trillion) and interest rates unchanged, as expected. ECB President Christine Lagarde also said the central bank saw signs that the economy was beginning to shake off the effects of the COVID-19 pandemic, but dismissed market suggestions that the ECB was considering winding down its PEPP. Instead, she made it clear that any phasing out of PEPP would be premature as of now. In addition, the ECB is pessimistic about near-term risks to the economy, arguing that upcoming economic data suggest that economic activity may contract again in the first quarter of this year, before returning to growth in the second. The euro did not move significantly against the dollar after the decision. By last week's close, the EUR/USD rose by 0.95% to 1.20965. This week, Eurozone GDP and CPI to be released do not seem to offer many surprises as much of the Eurozone remains tightly economic lockdowns, after March's significant improvement (1.3%) over the previous CPI reading.