Is the EU economy showing signs of recovery? Euro is rising rapidly!

Abstract: The euro rose with surprisingly positive economic data. Stocks notched another record, and is higher inflation temporary? U.S. bonds hit a rough patch, while gold flirted with a return over $1,750 an ounce! Economic expectations improved sharply and crude oil prices edged up. AUD has been lackluster as the central bank was criticized for failing in its duty. 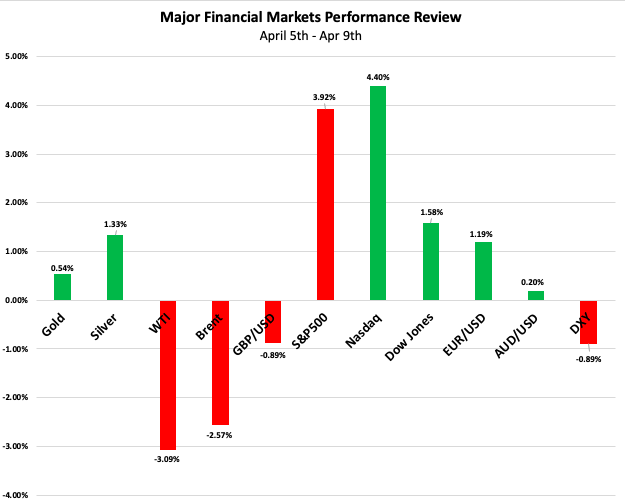 Last week, the euro rose strongly on the back of positive economic data from the Eurozone. The Eurozone's services PMI came in ahead of expectations, despite the renewed economic embargo imposed by some major European countries as a result of the third wave of the pandemic in Europe. And last week's data also showed that the business activity in the Eurozone manufacturing sector was expanding at a fast pace with the PMI rising to 53.2. The euro's rise was additionally supported by a sharp decline in the U.S. dollar as U.S. bond yields fell. As of last week's close, EUR/USD rose by 1.19% to 1.19008.  See EUR/USD Live Chart below:

However, the worsening of the pandemic, the slow pace of vaccination and the safety loophole of AstraZeneca vaccine have cast a shadow over the European economy, while the above economic data have shown signs of recovery. In addition, ECB minutes showed that many officials saw rising bond yields and premature tightening of financing conditions as detrimental to the economic recovery. And the ECB said that inflation in the Eurozone has risen to its highest level since the outbreak of the pandemic, but not because of rising prices. Eurozone CPI due out this week, reflecting market expectations for future European inflation will be worth watching, as earlier data, though improving, are still below the ECB's target.

U.S. stocks had another good week last week, as positive economic and employment data extended the market's bullish sentiment. The services PMI registered a record reading of 63.7 in March, up 8.4 percentage points from 55.3 for the previous month, another important factor supporting the rally of U.S. stocks. Then the S&P 500 index hit a record high while the 10-year US bond yield continued to decline, since the minutes from last week's Fed meeting contained few surprises, where Fed Chair Jerome Powell reiterated that the central bank has tools to curb inflationary pressures and inflation rise is a temporary trend. As of last week's close, the S&P 500, Nasdaq and Dow went up by 3.92%, 4.40% and 1.58%, respectively, to 4,128.8, 13,829.31 and 33,503.57. See S&P500 Live Chart below:

However, initial claims for jobless benefits rose by 16,000 from the previous week to 744,000, suggesting it may take longer for the economy to reach full employment, despite the strong recovery. This week, U.S. CPI and retail sales data will be released. The CPI inflation, which is projected to be 2.4% and seems to be well above the Fed's expectations, may make U.S. stocks more volatile. And investors will be watching to see if the U.S. retail sales data improves after it took a 3% nosedive in February, sharply below January's 4.7 percent gain, as harsh winter weather gripped several parts of the country.

Instead of weighing on gold, the strong economic data has pushed the metal slightly higher, suggesting that investors are gradually waking up to the inflation issue behind the strong recovery. Also, reeling U.S. Treasury yields and the resurgence of the pandemic in some areas contributed to the rally, pushing gold above 1,750 last week for the first time in more than a month. At last week's close, gold traded at $1744.2, up 0.54%. In the short term, if gold continues to break through the 1750 resistance level, there may still be room for a modest increase; But if it hovers around the resistance, its rally seems to have run its course. Separately, the U.S. dollar index (DXY) print a gap-down by about 1%, briefly to 92.4, last week due to lower U.S. bond yields. DXY closed last week at 92.182, down 0.89%. This decline following three straight weeks of gains appears to have come as no surprise to the market, and the dollar's future is likely to be dominated by swings in Treasury yields and the progress of the government's massive investment program.

Oil prices fell sharply at the start of last week, falling as much as 5%, as a result of a surge in COVID-19 new cases in major oil importers and continued blockades in large European economies such as Germany and France. But U.S. crude and Brent crude prices then rose strongly as positive economic data from China and the United States and the IMF's decision to raise its global growth forecast to 6% this year and 4.4% in 2022 boosted investors' confidence in the global economic recovery. On top of that, API and EIA data recorded a sharp drop of 2.618 million barrels and 3.522 million barrels respectively last week, further easing concerns about the oil supply and demand imbalance due to another wave of the virus. At the close of last week, U.S. crude and Brent crude traded at $59.36 and $62.98, down 3.09% and 2.57 %, respectively. And there may be upside opportunities ahead as wider vaccination coverage and a continuing recovery support higher prices, despite the impending increase in oil production by OPEC Allies and ongoing global blockages that have depressed prices.

The Australian dollar was mixed as the central bank continued QE

The Australian dollar rebounded strongly at the start of last week. The currency regained support after the RBA's decision to keep monetary policy on hold, including keeping the cash rate in line with market expectations at 0.1%, and China's services PMI beat expectations by a wide margin. However, the Australian Labor Party, currently the opposition in the country's parliament, called for a review of the RBA's goals and the shared responsibility for fiscal and monetary policy in response to the economic weakness that preceded last year's recession. And Jim Chalmers, the Shadow Treasurer who reviews the government's policies and practices, criticized the RBA and its failure to hit its inflation target in recent years. Then AUD/USD came under pressure and closed the week at 0.7621, up 0.20%. And the Australian dollar could suffer further volatility if the Australian employment data, which will be released this week after a fall from 6.3% to 5.8%,  may not be positive since Australia ended a pandemic wage subsidy scheme with official warnings by the Australian Finance Minister that up to 150,000 people could lose their jobs as a result.