Abstract: As political uncertainty wanes, the U.S. stocks notched another record. The gold market was on the ropes, although a large-scale stimulus package will come out. OPEC+ Meeting ended with surprise, and crude oil skyrocketed. Can Bitcoin continue to rise after it hit $40,000? While Eurozone economy mixed, EUR/USD hit a rough patch. 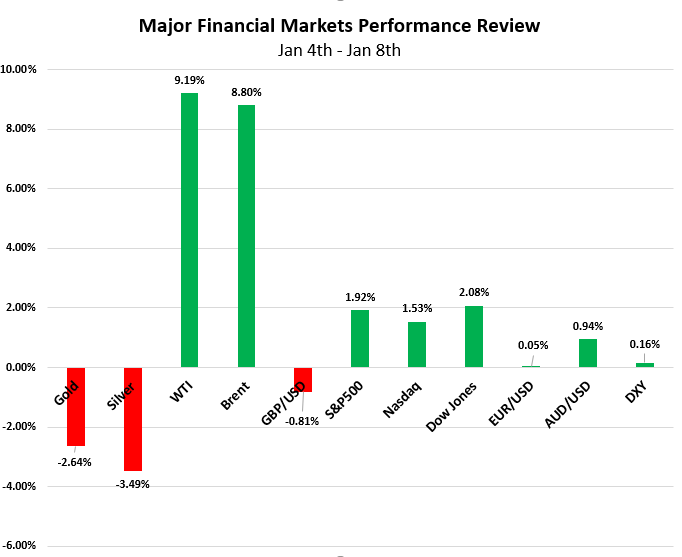 The U.S. political scene was briefly in turmoil last week, but the three major U.S. stock indices continued to hit new highs. The first trading day of 2021 got off to a bad start as investors fear of a worsening pandemic and Georgia's Senate runoff election fueled market panic. The subsequent Democratic majority win in the Senate and Trump's recognition of the new administration prompted further gains in the U.S. stocks. In addition, last week's PMI recorded expansion in U.S. manufacturing and services sectors amid a severe economic blockade, contributing to Wall Street's rally. Even though last week's first non-farm payrolls data for 2021 showed the U.S. lost 140,000 jobs in December, against economists' expectations for a gain of 50,000, the stock market seems to have shrugged off the fallout and be making history. At the end of last Friday, the S&P 500, Nasdaq and Dow Jones closed at 3803.79, 13067.3 and 31041.13, respectively, up 1.92%, 1.53% and 2.08% for the week. See S&P500 live-chart below:

Even so, the job market was still in bad shape, and the fundamentals of the U.S. economy failed to support such a strong stock market, but stock prices are a reflection of the future of the U.S. economy. Meanwhile, Biden will take office as expected and the Democrats will take control of the U.S. Congress with a majority in the Senate, making the market's expectation of larger-scale economic stimulus a reality, while the Federal Reserve's low interest rates and set inflation target may create a favorable macro environment for the U.S. stocks. This week, investors will see how the economic blockade has hit the U.S. economy with the release of U.S. consumer price index and retail sales data.

Despite the heavy hit, gold prices are still supported by the following fundamental factors:

1. As Democrats won the House and Senate, larger-scale economic stimulus could lead to further dollar weakness, giving gold some room to rise.

2. Falling real yields in the U.S. mean that inflation expectations will increase, thus making gold a safe haven for investors.

3. Large central banks may keep interest rates low for an extended period, adding to the harmonious background for the gold market.

Still, investors need to be wary of technical headwinds.

The OPEC+ meeting was a pleasant surprise, giving the oil market another boost

Last week was a joyous week for oil markets, with U.S. crude and Brent prices soaring above $51 and $55 per barrel, respectively. The reasons for the sharp rise include:

1. Saudi Arabia, a major oil producer, has voluntarily cut production. After last week's OPEC+ meeting, Saudi Arabia said it would voluntarily cut output by 1 million barrels a day over the next two months, sending both crude prices up more than 5%.

2. The oil market has benefited from the Democratic dominance of the U.S. House and Senate, which has raised expectations of a bigger stimulus bill under Joe Biden and pushed up prices for risk assets. 3. Last week's EIA crude oil inventory data showed an 8 million barrel drop in inventories in the last week of 2020, sending crude prices sharply higher.

While oil prices reacted quickly to the Saudi news, the markets seemed to ignore all bearish risks, it remains to be seen whether further cuts will have a lasting impact on supply in the context of rising new infections and emerging vaccination problems. Besides, the sharp drawdown in oil inventories due to increased holiday travel does not appear to fundamentally reverse the long-term weakness in oil demand, so investors should be aware of these market risks and beware of sharp oil prices pullback.

At the start of last week, the price of Bitcoin plunged 6,000 points to $27,678, the biggest drop since March. After the pullback, it re-enjoyed a strong rally, with the price sharply rebounding to $40,000, then plummeting again by 4,000 points before recovering moderately. It is worth mentioning that its market value has substantially exceeded $1 trillion. Sentiment in the Bitcoin market has certainly been boosted by new rules from U.S. regulators allowing banks to use less volatile digital currencies for payments, according to Bloomberg. Many see Bitcoin as a hedge against dollar weakness and accelerating inflation, on a par with gold. If that were to happen, it would be hard to gauge how far Bitcoin's price could rise in anticipation of continued dollar weakness. Still, there are plenty of voices in the market arguing that Bitcoin is nothing compared to gold. In any case, even if Bitcoin has no real value, it's not impossible that the momentum will continue if more and more investors see value in it.

EUR/USD surged and then retreated as the economic blockade intensified

The euro continued to be strong last week, with the single currency surging as high as 1.23495 against the dollar, breaking previous all-time highs. Then it fell sharply as the dollar strengthened. At last week's close, EUR/USD traded at $1.22193, up 0.05% for the week.

In addition, mixed economic data from the Eurozone underscored the thorny road to recovery in Europe. The PMI for the Eurozone's manufacturing sector came in at 55.2, suggesting continued expansion in the sector and largely offsetting a decline in the services sector. Economic sentiment in the Eurozone edged up to 90.4 points in December from 87.7 points in November, higher than expectations of 90.0 points, despite tighter economic blockade measures in Europe. The CPI, a measure of inflation, remained at minus 0.3 in December after the ECB increased monetary stimulus and extended emergency asset purchases until March 2022. The sharp rise in the euro was mainly driven by the recovery efforts of the ECB and the weakness of the dollar. However, the ECB has also stated that it will "maintain EUR/USD at 1.2", which may become an obstacle to the continued strengthening of the euro. Moreover, the increasingly severe economic conditions in the Eurozone will also limit the upward movement of the euro.

Last One With recent unfavorable news,is gold and silver deep in trouble?
Next One Bitcoin has been resurrected and its aftermarket is expected to rise
Latest Release
Popular Reading