Brexit on the edge, GBP suffers from downward pressure!

Abstract: The GBP may be at severe risk as Britain's Brexit negotiations with the EU have repeatedly snagged. When will the bull market appear while the stimulus package took a beating? The oil market is in crisis and oil prices are worrying. Opportunities for gold and silver reappear. Europe's economy is recovering and the euro is rising. 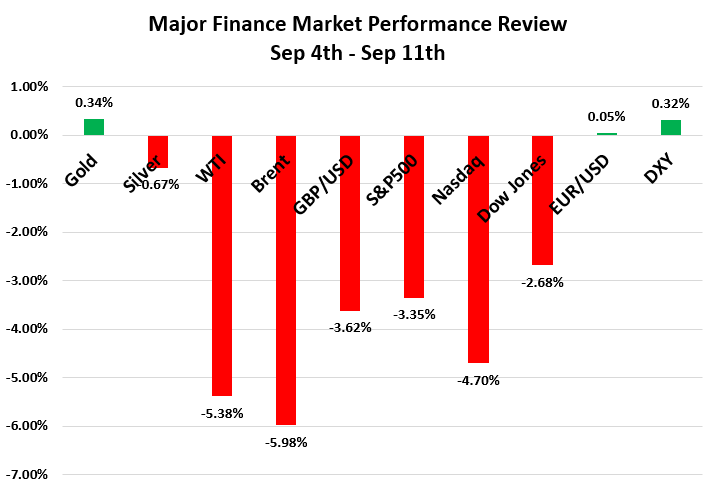 Post Contents [hide]
Brexit negotiations are in jeopardy and the GBP is worrying.

Last week's Brexit talks have been a key drag on GBP. British Prime Minister Boris Johnson sparked concern by saying he would rather end the negotiations than compromise on core terms. The British government has opted to press on with the Internal Market Bill that would grant itself powers to not consult the EU in state aid cases involving the trade of goods between Northern Ireland and British. This shock move could break international law, undermine a Brexit divorce deal it signed last year and thus draw strong complaints from the EU. It triggered such a strong market response that GBP was heavily sold early last week, sending it briefly below 1.3 against the dollar. The UK, disregarding the EU’s warnings that trade talks would be called off if it failed to withdraw the Bill, said the British Cabinet “would not be withdrawing” the new plans, causing market panic to intensify. GBP then plunged more than 200 points to as low as 1.2772, its biggest one-day fall since March. In addition, Britain has reached a free trade agreement with Japan, its first with a major economy since leaving the European Union earlier this year, which could boost confidence in a no-deal Brexit. The pound edged higher on the news. As of last week, GBP closed at 1.2796 against the U.S. dollar, down 3.62% for the week. See GBP/USD real-time price chart as below:

As for the UK economy, the reopening of pubs, restaurants and other businesses shut down by COVID-19 helped it grow by 6.6 % in July, the third consecutive month of growth, but still 11.7% below pre-pandemic levels. This week, the pound continues to be dominated by the progress of British’s Brexit negotiations with the EU, and how the UK deals with the Internal Market Bill will be a key part of its relationship with the EU and other big countries. Meanwhile, investors should pay attention to the Bank of England's forthcoming fiscal and monetary policy, which could deliver a double blow to GBP.

Will the bull market come of the U.S. stocks that are hanging in the balance as hoped?

The U.S. stock market had a rollercoaster week last week. The Labor Day holiday did little to ease investor sentiment. Instead, U.S. stocks extended a two-day losing streak and plunged again on the first day of trading last week. It was speculated that the "Nasdaq Whale", SoftBank, is to blame for U.S. stock bubble.  In past few months, Soft bank has been purchasing billions of dollars in stock options to bet on a rising stock market, so that the us stock market has been pushed higher. Besides, retail investors in the U.S. stock market are extremely active. Despite the plunge, their enthusiasm for stocks has only grown, especially for tech stocks. U.S. stocks took a breather after the plunge, but rebounded on Wednesday to continue its downward trend. By the end of last week, the S&P 500 was down 3.35% and the Dow 2.68%, closing at 3339.19 and 27534.59, respectively. The Nasdaq was even worse, down 4.7% for the week at 10,919.59. The outlook for U.S. stocks remains uncertain, with some analysts saying the likelihood of continued volatility remains high before the NASDAQ reaches a 20% correction. Still, the long-term bullish view of U.S. stocks is held in high esteem by most investors.

In the U.S. Dollar Index, a better-than-expected report on U.S. Producer Price Index last week failed to offset the negative impact of U.S. jobless claims, causing the dollar to snap a six-day winning streak on Thursday and creating a "dark-cloud cover pattern", thereby giving bulls a break. By the end of last week, the U.S. Dollar Index closed at 93.271, up 0.32% for the week. However, the US stimulus package stands still. The Senate failed to meet the 60-vote threshold it needed to advance the Republicans' “skinny” pandemic stimulus package, and with the Congress running out of time in September, it looks increasingly likely that a deal will be delayed until after the November election. The Fed will release its fiscal and monetary policy at the FOMC meeting, on which financial markets are refocused following comments that the Fed will ease inflation. Additionally, monthly retail sales figures, known as the devil's numbers, will be released, which could have a major impact on U.S. stocks and the U.S. dollar.

Oil market is suffering a sell-off as pessimism prevails

Last week, the oil market languished, oil bulls came under great pressure, and API and EIA data added gloom to it. They reported unexpected increases of 2.97 million and 2 million barrels, respectively, and EIA crude oil inventories hit a seven-week high. In addition, the EIA revised down its forecast for 2020 global oil demand growth by 210,000 bpd. It now sees an annual decline of 8.32 million bpd, confirming the current dismal oil market. The data reversed an upward trend in crude oil that had been driven by a rebound in U.S. stocks, sending U.S. crude and Brent crude sharply lower. By the end of last week, U.S. crude traded at $37.3 and Brent at $39.79, down 5.38% and 5.98%, respectively. Moreover, the rise in floating oil storage is particularly worrying because it means that onshore reserves remain fully invested despite a modest increase in fuel demand following the easing of most economic blockade measures since May. A separate report from OPEC+ that the group exceeded production cuts in August did little to ease the gloom in the oil market. A ministerial OPEC+ monitoring committee, known as the JMMC, is meeting this week to discuss current supply and demand as well as production cuts, and is expected to send a shudder through the oil market.

Are gold and silver poised to regain lost ground as risk aversion rises?

Gold and silver benefited slightly from last week's surge in the CBOE Volatility Index, or VIX. Sell-off in risky assets has seen the gold market take advantage of it to show signs of a recovery. Gold briefly topped $1960 to $1,966 an ounce and closed at $ 1939.4 by the end of last week, up 0.34%. Furthermore, gold-linked ETFs recorded their ninth consecutive month of inflows in August, according to the World Gold Council, but at the lowest level since 2020, justifying the current short-term volatility but long-term bullish outlook for the gold market. In silver's case, the metal has seen a sharp drop in volatility over the past week, with little good news to support it as gold has been a better haven and the vote gap between clean energy champion Joe Biden and Donald Trump appears to have narrowed. At the close, silver dropped to 26.717, or by 0.67% for the week. In addition, the U.S. dollar's rally may pose downside risks to the gold and silver market.

Last week, the European Central Bank (ECB) announced the fiscal and monetary policy to keep its three key interest rates unchanged. The ECB President Christine Lagarde said its main interest rates would remain at current or lower levels until inflation has shifted firmly towards a level sufficiently close to, but below, 2%. Separately, according to Bloomberg, European Council members have agreed not to overreact to the euro's strength, helping to push it higher. The euro rose sharply against the dollar after the interest rate decision, breaking 1.9 at one point before retreating slightly. By the end of last week, the euro closed at $1.18453, up 0.05% on the week. On the European economy, Christine Lagarde said Europe's economic recovery is strong and in line with expectations, while the Eurozone's recovery is uneven and asymmetric, and consumption and business investment are still under pressure. Eurozone GDP contracted 14.7% in the second quarter from a year earlier and 11% from the previous quarter, less than initially expected but still the biggest drop on record. The euro is likely to remain strong against the dollar going forward as the EU economy is recovering and the dollar remains a concern despite its strength over the past few days. Investors should pay attention to this week's Eurozone CPI data, which reflects the level of inflation and the progress of the economic recovery in the Eurozone, as they may be volatile for the euro.

Last One With recent unfavorable news,is gold and silver deep in trouble?
Next One Gold awaits for upward momentum.When will it come?
Latest Release
Popular Reading