With recent unfavorable news,is gold and silver deep in trouble?

Abstract: Sudden accident! Gold and silver are on a bumpy road. U.S. stocks soared while the dollar fell again. Crude oil depends on Heaven, and oil prices are a bit short of staying power. Why is the Australian dollar soaring as the economic recovery falters? EU is experiencing an eventful year, and the euro has had many twists and turns. 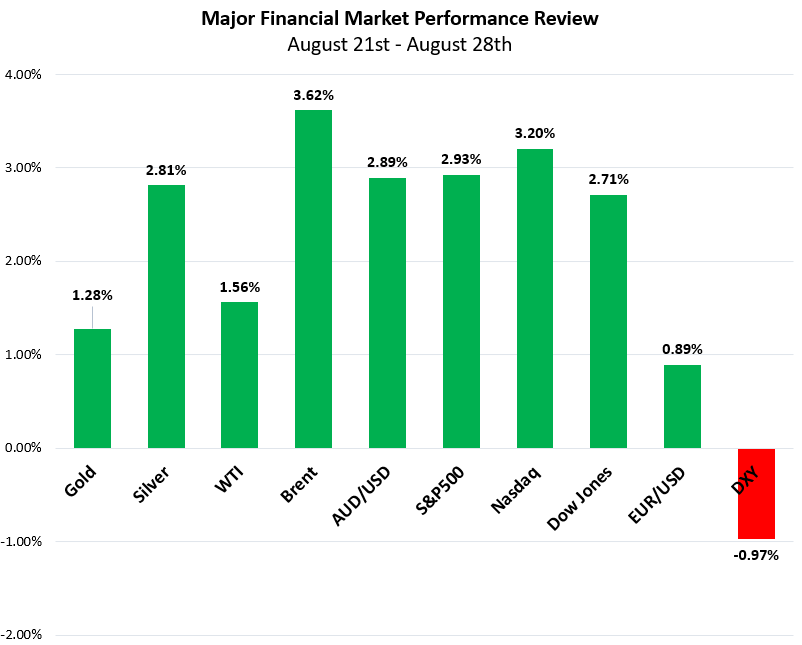 Last week saw another rollercoaster ride for gold and silver. Gold briefly traded as high as $1976.65 an ounce following a virtual speech by Fed Chief Powell on the central bank's new inflation target from the central bank’s annual Jackson Hole, Wyo. symposium, before falling to $1,910 as the Fed failed to target 2.5% inflation as markets had hoped. Meanwhile, gold and silver moved in tandem, with silver briefly approaching $28 an ounce before retreating. But on Friday, gold re-crossed the 1970 mark, perhaps because markets had digested the Fed's message, the first exchange in bipartisan talks on the economic bill in three weeks failed to make progress, and worries rose about the resignation of Japanese Prime Minister Shinzo Abe. By the end of last week, gold and silver were up 1.28% and 2.81%, respectively, at $1964.5 and $27.48 an ounce. See gold real-time chart as below:

1. The new stimulus package is a wild goose chase while original incentives for gold and silver have been restrained.

2. The Fed's statement last week added to the woes of the gold and silver markets.

3. As economic data gets better and better, large amounts of assets are flowing into stocks with higher returns.

In such case, looking ahead, gold and silver markets should focus on the following:

1. There may be hope for a bipartisan agreement on a small-scale stimulus bill.

2. As the Fed unveiled a new inflation policy that will keep interest rates lower for a longer period of time, so gold and silver may still rise.

U.S. stock indexes soared. Are the bears at a loss?

Last week, the Jackson Hole Economic Symposium conference kicked off on schedule, where Fed Chairman Jerome Powell delivered a much-anticipated speech. According to the speech, the Fed expected inflation to grow by an "average" 2% over time and allowed it to rise "moderately" to offset periods of weakness. Jerome Powell also expressed the Fed’s plan of intensify efforts to stimulate employment. Afterwards, U.S. stocks continued to open sharply higher, continuing a strong performance that at one point raised questions about whether the U.S. stock market was a safe haven. The three major U.S. stock indexes have been surging as the U.S. Securities and Exchange Commission eased its requirements for public companies to allow more flexible disclosure of risk and legal information, as well as Mr Powell's attitude change in Fed policy. As of last week, the S&P 500 closed at 3,484.55, the NASDAQ at 11,625.34 and the Dow at 28492.27, up 2.93%, 3.2% and 2.71%, respectively. See S&P 500 real-time chart as below:

On the dollar side, it has had a bumpy ride in recent months. The delay in finalising the new stimulus bill gave the U.S. dollar a brief respite and it thus climbed to near 94 before, but Jerome Powell's comments pushed the dollar into the abyss again, with the U.S. Dollar Index falling below 93. It even ended last week at 92.301, down 0.97% for the week. On the other hand, last week's positive Quarterly U.S. GDP data and an increase in U.S. durable goods orders in July helped push yields higher.

Investors will get more about the progress of the U.S. recovery next week when the manufacturing and services PMIs are released. In addition, non-farm payrolls data due this week, after U.S. jobless claims topped 1 million for two straight weeks, could be a bellwether for U.S. stocks.

"Hurricane Laura" pushed up short-term oil prices, but the oil prices wil remain under pressure in the future

Last week, a major factor for crude oil prices was the landfall of Hurricane Laura in the Gulf of Mexico. U.S. crude prices rose as high as $43.75 a barrel in the first three days of last week and led Brent through the $46 an ounce mark on concerns that the hurricane would shut down production in the Gulf of Mexico and thus led to undersupply. U.S. crude inventories fell 4.7 million barrels last week, less than the 3.7 million barrels analysts had expected, and U.S. crude exports rose at their fastest pace since February 2019, according to the EIA.

But all this good news has only sustained a short-term rise in oil prices. Despite the shutdown of production capacity by 84% in the Gulf of Mexico, U.S. Deputy Energy Secretary Dan Brouillette said the damage from Laura was "mild" and no energy shortages were expected, so production in the region would recover quickly after the hurricane. However, the positive impact of Hurricane Laura on oil prices has been offset by downside risks from the novel Coronavirus' rapid spread and weak recovery in oil demand in major oil markets. As of last week, U.S. crude oil rise by 1.56% to close at $42.93 a barrel, whereas Brent oil closed at 45.86%, up 3.62%.

There are several key factors behind oil prices：

First, ceasefire in Libya may pave the way for oil supplies in the country.

Second, if the Democrats win the White House, then the government will ease sanctions on Iran, resulting in an increase in Iranian oil production.

Third, the resurgence of COVID-19 will be a persistent factor for oil prices.

The novel Coronavirus in Australia remained the focus of the market last week. A second wave of the novel Coronavirus in Victoria, Australia, has led to economic stagnation in the region. Although the virus has been under control for nearly two weeks, some new cases have been reported near Sydney. Still, a gradual rebound in consumer inflation expectations and slowly improving unemployment partly justify the Reserve Bank of Australia not considering further monetary policy adjustment, providing a relatively favorable environment for the Australian dollar. Last week, the Australian dollar managed its fifth straight rally against the U.S. dollar, breaking through a near 22-month high. The Australian dollar ended the week at 0.7366, up 2.89%.

The rise was fueled by a $21 billion ($15.1 billion) in new 11-year sovereign bonds that Australia sold, its third record-breaking sale this year. While other central Banks in virus-hit countries and regions have tried to hold down interest rates, the RBA adopted yield curve control and made Australia with best bond yields in the G10 countries, pushing the Australian dollar higher. Australia's upcoming fiscal and monetary policy announcements and central bank interest rates will be of interest this week. And last week Australia's prime minister signalled his government would stand up to an increasingly assertive Chinese government, despite the potential economic cost. Therefore, the relationship between Australia and China may have a significant impact on the trend of the Australian dollar.

Brexit negotiations saw twists and turns, with the euro fluctuating against the dollar

A second wave of COVID-19 in Europe last week remains a major concern for the current market. Such reversal of the epidemic has prompted European countries to strengthen pandemic prevention and measures and may cause secondary damage to the services and tourism industries that are recovering. In addition, the EU's internal divisions, the uncertainty of Brexit and the conservative trend in global trade will also have a negative impact on the European economic recovery. The euro had its ups and downs against the dollar last week. It closed at 1.19008, up 0.89% for the week. See EUR/USD real-time chart below:

Brexit talks hit another snag. Mr Hogan had to resign as the EU's main negotiator in the Brexit negotiations after a dinner party broke Ireland's anti-virus policy, but there is no effective replacement for the man to offer. As a result, negotiations on leaving the EU will remain fraught.

Separately, ECB Chief Economist Philip Lane says the central bank faces two challenges: to counteract the negative shock to the expected inflation path caused by the pandemic and to ensure that the post-pandemic monetary policy stance is appropriately calibrated. He speaks virtually at the Fed's annual policy symposium traditionally held in Jackson Hole, Wyoming. Therefore, the EU economic data and fiscal and monetary policies released next week, including EU GDP, inflation rate, central bank fiscal and monetary policies and unemployment rate, are of particular importance that will move the future trend of the euro. Investors should pay careful attention to them.

Next One Australian economy faces unprecedented setbacks. Where will the AUD go from here?
Latest Release
Popular Reading