Abstract: Oil prices fluctuated dramatically after 321 vessels have been jammed around Egypt's Suez Canal. Fed officials switch to a hawkish tone, and U.S. stocks continued to fall. The dollar rose strongly on increased risk aversion. The pound fell sharply as the UK-EU dispute resumed. The virus bounced back and the euro was weak. 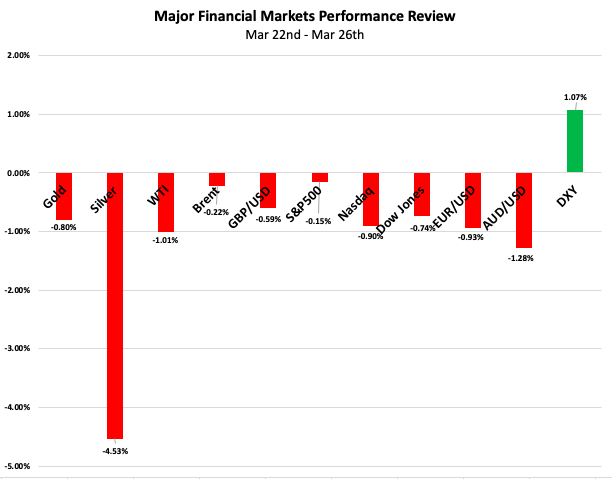 The rapid economic recovery has been overshadowed by upcoming new blockades in Europe, sending crude oil prices to their lowest level since early February. Further, the recent rise in Treasury yields and the big bulge in the dollar have made this risk asset less attractive. U.S. API and EIA crude inventory data recorded increases of 2.93 million barrels and 1.912 million barrels last week, casting doubt on the market's expectations for a quick recovery in demand. Still, U.S. crude and Brent crude skyrocketed as much as 13.9% and 6%, respectively, as the salvage of a giant container ship that has ran aground in the Suez Canal jammed oil shipments. Crude prices were briefly supported, however, before the two major oil indexes pared gains. At last week's close, U.S. crude and Brent crude closed at $60.8/BBL and $64.37/BBL, respectively, down 1.01% and 0.22%.  See Live Brent Price Below:

The supply and demand were re-thrown into chaos as Germany, France and Italy, among others, announced new blockades after Easter. And the third wave of the pandemic no doubt threatened oil demand. Since OPEC+ was expected to remain unchanged at current levels, this week's OPEC Joint Ministerial Monitoring Committee (JMMC) meeting, which will focus on whether Saudi Arabia can continue its voluntary production cuts, will be worth watching.

At the beginning of last week, the decline in bond yields led to a rally in U.S. stocks. Then, fears of higher inflation intensified as U.S. President Joe Biden worked on a $3 trillion infrastructure package. Fed Chairman Jerome Powell said at a congressional hearing last week that the U.S. economy is set for higher growth and temporary inflation, and stressed that interest rates are likely to remain near zero. But he later struck a slightly hawkish tone, saying that with the U.S. economy recovering strongly, central bankers may at some point withdraw emergency support, sending bond yields climbing and stocks tumbling. At last week's close, the S&P 500, Nasdaq and Dow decreased by 0.15%, 0.9% and 0.74% to 3,909.52, 12,997.68 and 32,619.48, respectively.

On the economic front, U.S. initial jobless claims came in at 684,000 last week, better than market expectations of 735,000. However, new COVID-19 cases have risen again as many states have loosened their economic blockades, despite the accelerated vaccination campaign in the United States. Meanwhile, investors should keep an eye on the U.S. manufacturing PMI and non-farm payrolls data this week, when the recovery in the U.S. labor market will come back into focus.

The dollar rallied strongly, while gold traded in a tight range

Last week, gold was mired in another range-bound price movement. On the one hand, gold's attempt to rebound was supported by soaring risk aversion as a result of concerns about the pandemic in Europe. On the other hand, last week's comments from the Fed Chairman that the rise in inflation was temporary and the economic recovery was optimistic gave gold a setback on the upside. At last week's close, gold traded at 1,730.9, down 0.8%.  See Live Gold Price Below:

The dollar's recent strength, supported by rising Treasury yields, has been negative for gold, potentially exposing prices to further declines. Separately, the U.S. dollar moved higher, as risk appetite was subdued and risk aversion was spurred by further interest rate increases of the Turkish central bank triggered by the resurgence of the pandemic and a sharp devaluation in lira. The dollar rose as high as 92.6 last week, its highest level in nearly four months. And a poor auction of $62 billion in 7-year notes supported a rise in Treasury yields and helped the dollar continue its climb. The U.S. Dollar Index closed last week at 92.723, down 1.07%.

Going forward, the trend may continue to be driven by the volatility of U.S. bond yields and the risk aversion following a renewed economic blockade.

Sterling fell on another issue of vaccination

Sterling fell against the dollar for three straight days last week, largely because of a stronger dollar and increased uncertainty about the UK's vaccine supply as the row between the EU and the UK over vaccine supplies revived last week after the European Commission put forward a proposal that would give EU governments greater powers to block vaccine exports. As a result, the currency pair dropped to 1.3674, its lowest level in nearly six weeks. However, there were positive signs from the UK economic data. UK labor force data showed the unemployment rate fell slightly to 5% in the three months to January, the first fall since the outbreak of the COVID-19. And the latest PMI came in at 56.6, up sharply from the previous reading of 49.6. Nonetheless, GBP/USD ended the week at 1.3786, down 0.59%.

In addition, investors should keep an eye on UK GDP data due out this week. They should also pay attention to the risks to sterling from factors such as the UK-EU relationship, the vaccination in the UK, and the trend of the dollar, although the UK economy is recovering from the virus crisis, thanks to higher vaccine coverage and more positive economic data, as well as the gradual lifting of the economic embargo.

With another wave of COVID-19, the euro was going in an unoptimistic way

The euro took another hit and fell to 1.17619 against the sharply rising dollar, the lowest level in nearly four months, as the deterioration of the COVID-19 in the Eurozone plunged the European economy, which was already lagging behind the UK and the US, into gloom, and the shortage of vaccine further undermined market confidence. At last week's close, it dropped by 0.93% to $1.17928.

Last week, the Eurozone's PMI showed business activity in the region unexpectedly rose in March, rebounding to 52.5 from 48.8 in February and the highest level since late 2018. But the increase may not last until April amid the reimposition of severe economic lockdowns. On top of that, the ECB's economic report suggested depressed long-term inflation expectations in the euro zone and increasing uncertainty about the short-term growth. The Eurozone's CPI will be released this week, and it will be interesting to see if there is a slight improvement compared with the previous reading of 0.9%.

Last One With recent unfavorable news,is gold and silver deep in trouble?
Next One Nonfarm Payrolls Data Preview: The U.S. economy restarts and NFPs may see a positive surprise
Latest Release
Popular Reading