Abstract: Non-farm payrolls data for July are coming. The continued spread of the Delta variant and the weak U.S. economic data sent U.S. Treasury yields sharply lower, pushing gold and the U.S. dollar into renewed turmoil. Despite the current headwinds in the U.S. labor market, non-farm payrolls were estimated to rise above 900,000 in July and the unemployment rate might fall to 5.7 percent. The non-farm data will be the catalyst for the Fed to adjust its policy. Will the Fed remain dovish if July data continue to improve?

U.S. non-farm payrolls jumped by 850,000 last month, well above market expectations. But the number of Americans who voluntarily left their jobs surged from 164,000 to 942,000 in June, one of the main reasons for the slight rise in the unemployment rate, as workers were eager for better jobs amid a labor market imbalance. In terms of sector employment, the leisure and hospitality industry continued to be a major contributor to the increase, adding 344,000 jobs in June, but still 2.2 million fewer than before the outbreak. Other notable job growth was in education, where 269,000 people were hired in the state, local and private sectors, as shown below: 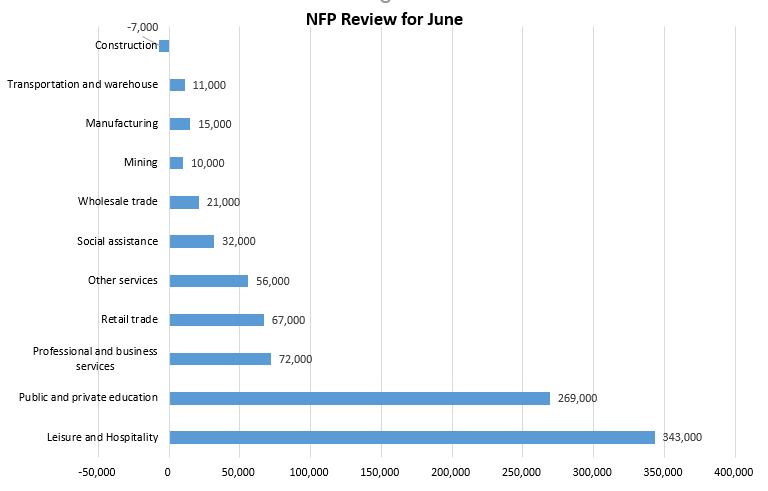 Overall, the increase in June’s employment eased some of the fears about labor shortages and provided continued momentum for the economy to reopen. Hiring would likely continue to accelerate in the second quarter. Bloomberg reported the consensus among economists that non-farm payrolls would have risen by 900,000 in July, while those polled by Reuters expected non-farm payrolls to have increased by 926,000 jobs in July, with the unemployment rate falling to 5.7%. Will July's payrolls numbers be as optimistic as the economists forecast when most parts of the country were subject to an explosion in new COVID-19 cases?

As the Delta variant continues to spread, the U.S. labor market could take a hit. New infections in the United States have risen since July, with a seven-day moving average of more than 70,000. That's more than the peak last summer, when the vaccine was not authorized, as shown below: 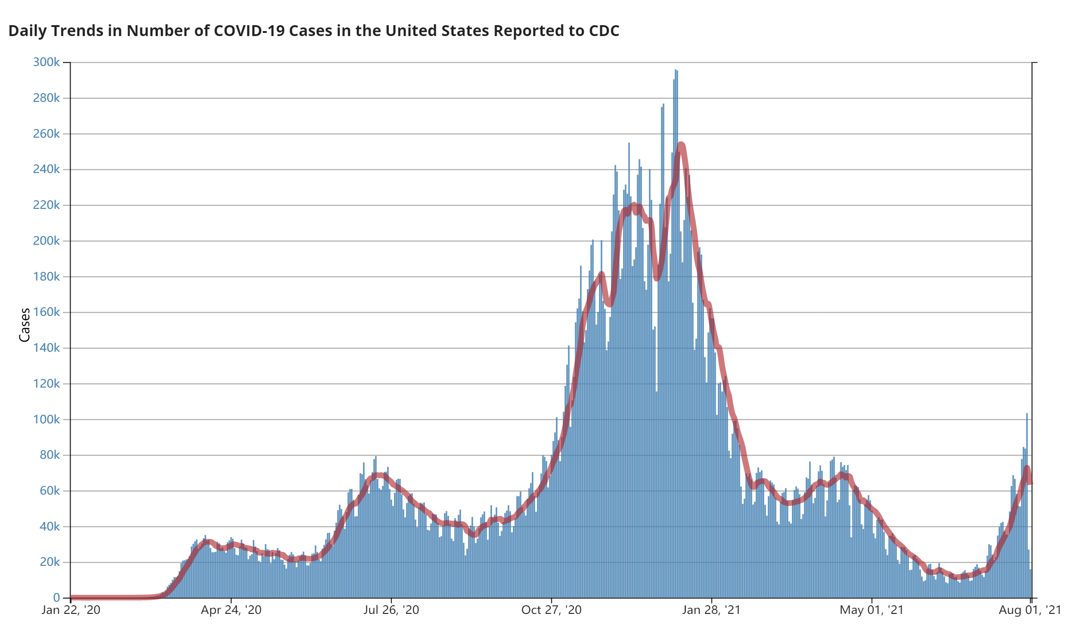 Source from: Centers for Disease Control and Prevention (CDC)

In addition, the high infectivity of the Delta variant further exacerbates the adversity in areas with low vaccination rates in the United States. Although 70% of U.S. adults are already vaccinated, about a dozen states have fewer than 60% of adults getting at least one dose of vaccine, a drag on the nation's goal of reaching 80% herd immunity. As a result, the uncertainty created by the virus would put the country at greater risk of supply chains and labor shortages. And if Americans panic about the virus, that could prevent them from returning to work, slowing the jobs recovery.

Despite the worsening U.S. pandemic, initial jobless claims continued to decline in July, as shown below: 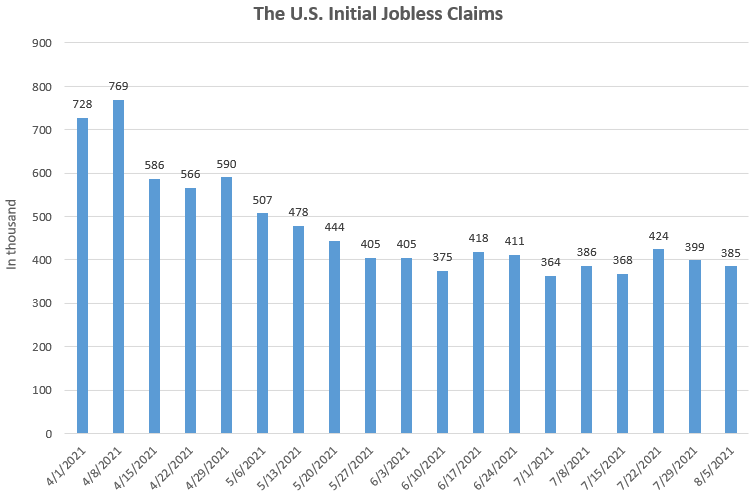 In an effort to get unemployed Americans back to work, 26 states ended the federal government's $300-a-week unemployment insurance program at the end of July. That means some or all of the unemployment benefits for about four million Americans will be lost before they expire in September. But many economists said there was "little sign" that the end of unemployment benefits would prompt Americans to resume work. As the government agonized over how to stimulate employment, U.S. job vacancies came at record levels. The number of U.S. job openings climbed to 9.21 million in May from 9.19 million previously, according to the Job Openings and Labor Turnover Survey (JOLTS) released by the Bureau of Labor Statistics in July, underlining the hiring difficulty companies face in meeting surging consumer demand as a result of labor shortages. And rising inflation pressures are preventing some companies from paying higher wages, hindering the rebound in the labor market. Recently, the Fed reiterated at its policy meeting that inflation is only temporary and further job creation is needed before it is ready to reduce its economic stimulus. Therefore, the non-farm payrolls report would provide the market with guidance on the Fed's quantitative easing tightening.

How will the non-farm payrolls affect gold and the dollar?

1. Gold price fluctuated significantly as the ADP employment report shows job creation at private companies tumbled in July. Recent weak U.S. economic and employment data led to a sharp fall in U.S. Treasury yields, which in turn increased gold's appeal as a non-interest bearing asset. The metal had appreciated sharply after a surprise rise in the U.S. unemployment rate in June sparked market fears. If the non-farm payrolls data is as positive as expected, then the likelihood of the Fed tightening its quantitative easing at its next policy meeting will increase, and gold could become volatile. Conversely, if July non-farm payrolls fall short of expectations, gold could rally as the Fed will continue quantitative easing to push employment to its target.

2. Will the dollar be helped higher by the non-farm payrolls data? The U.S. dollar index briefly fell below 92, its lowest level in nearly a month, after Fed Chair Jerome Powell made relatively dovish comments at the July's FOMC meeting. However, Fed governor Christopher Waller had said the central bank could start to scale back its economic support by October if the next two monthly jobs reports show an increase of 800,000 to 1 million jobs. Hence, if the non-farm payrolls for July continue to increase, then the dollar may gain support.